Video Breakdown: When taking away Daniel Thomas on the lead option means death by QB

Share All sharing options for: Video Breakdown: When taking away Daniel Thomas on the lead option means death by QB

This post is sponsored by Samsung, who will be featuring posts around the SB Nation network today about fandom being enriched by the intersection of sports and technology. Today we hope to Enhance Your Experience by examining Kansas State's three primary rushing concepts featuring ground threat QB Collin Klein.

Earlier, we looked at what happens when Klein defers to Daniel Thomas on the zone read. Now, we'll look at a different look for Klein and Thomas. All images can be enlarged by clicking on the snapshots.

Whereas the shotgun might tip off teams to look for a zone read, QB draw or QB dive, the under-center single-back look below lends itself more to Daniel Thomas' straight-attack ground attack. But focusing on an interior rush can open up the perimeter, especially with Klein in the game to stretch the field horizontally. 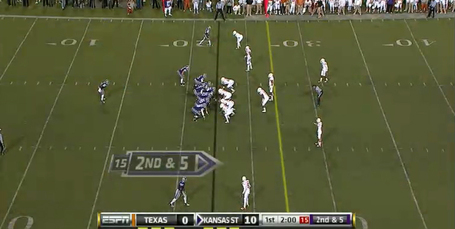 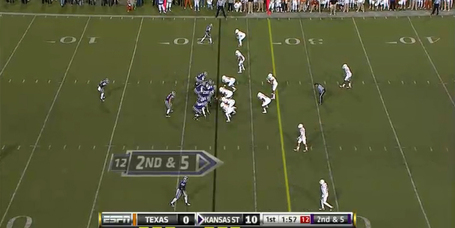 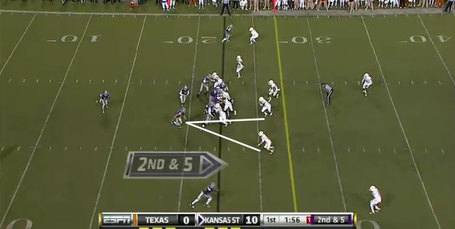 At the snap of the ball, Klein immediately runs parallel to the line of scrimmage along the right side of the formation. At this point, which defender is the "option man" remains to be seen, as the H-back/tight end has two options of where he can lead the ball carrier(s).

Three major points of note in the above screen grab. First, the top part of the highlighted area shows the in-line tight end's ability to turn the defensive end inside and effectively seal the edge of the line of scrimmage. Second, the linebacker initially keyed by the blocking back charged upfield in the same gap, allowing one blocker to essentially push two defenders behind the play. Lastly and perhaps most importantly, just below that block, you see safety Blake Gideon (standing on the arrow of the "2nd & 5" graphic) stepping in from the slot completely unblocked as the H-back/tight end instead opts to seek out the farside linebacker at the second level. Gideon now determines what Klein will do with the ball. Gideon steps between Thomas and Klein to negate the pitch, forcing Klein to keep the ball and turn upfield. 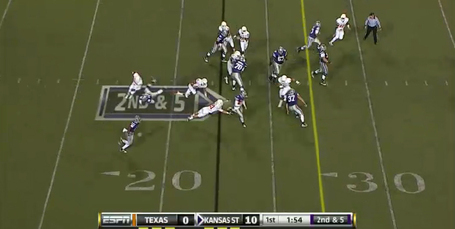 The motion man who went to the second level picks up his block of the farside linebacker. After forcing Klein to keep the ball, Gideon dives and a misses an open field tackle (a recurring nightmare alternatively titled "the 2010 season" by Texas fans). 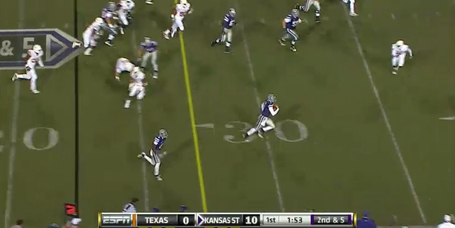 Gideon took Thomas out of the play, and Klein made him pay. The quarterback rolls down the right sideline for 22 yards.

Just because a team runs the option doesn't automatically make them Navy, but that doesn't mean there shouldn't be reason for concern. No matter if Klein or Coffman starts on Saturday, Snyder is extremely likely to call the lead option with either quarterback. You won't confuse either of them for Denard Robinson or Brad Smith athletically, but as teams continue to try to minimize the impact of Daniel Thomas, Snyder realizes he can slowly punish defenses for not respecting the original ballcarrier. It may not look as sexy as Thomas running over people or running free, but Snyder and his quarterbacks will chip away all day long if you let them.