This post is sponsored by Samsung, who will be featuring posts around the SB Nation network today about fandom being enriched by the intersection of sports and technology. Today we hope to Enhance Your Experience by examining Kansas State's three primary rushing concepts featuring ground threat QB Collin Klein. 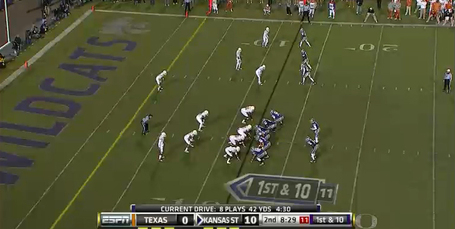 In what smashmouth football snobs would call "traditional" football, Texas appears to have the edge stopping the run in this set. Texas shows seven men in the box with four down linemen against K-State's five linemen plus a tight end. For journalism majors like myself, I should emphasize that 7 > 6, thus Texas should have an extra defender when the Wildcats inevitably give the ball to Daniel Thomas since, you know, running quarterbacks are a gimmick and a sham. /MDWM

Klein gets the ball on the designed QB run, and somewhere in America a 1990s NFL elitist kicks a puppy. The center and right tackle seal the backside, but the highlight right guard pulls left to lead block. All three linebackers remain free up top with the right guard and Daniel Thomas charged with finding a way to block three with two. 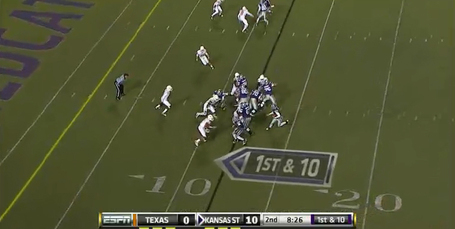 Two linebackers read the run and head downfield on the playside. One linebacker hovers around the hashmarks. At this point, it's Thomas and the guard vs. the two backers at the line of scrimmage and Klein vs. the hovering linebacker. The secondary has been rendered completely meaningless on the play by the trips set that occupied four defenders at the top of the first screenshot. 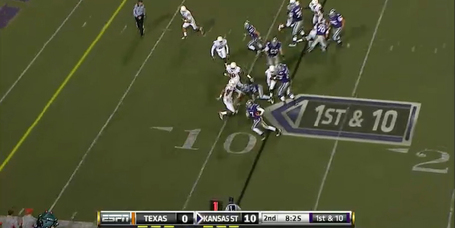 The guard ties up his man, and Thomas bounces into the defender just long enough to allow Klein to outflank him to the sideline. The quarterback's now in a foot race to the goal line. 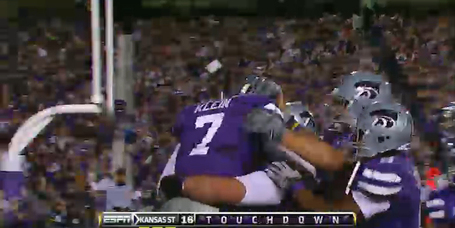 Guess who won the foot race?

Neither Collin Klein nor Carson Coffman are Robert Griffin. Nothing about either quarterback is going to scare you on a Rivals.com recruiting profile or on an NFL Draft board. But with a Bill Snyder team, you have to account for the quarterback in every single situation. While Randy Walker and Rich Rodriguez were busy revolutionizing football by bringing back spread principles and updating read-based running games, Snyder was working miracles in Manhattan by turning Michael Bishop into one of college football's biggest dual threats of the late 1990s. Missouri has every right to be scared of Daniel Thomas on the ground, but Kansas State is ready to prove its willingness to beat you in whichever way you prefer, including quarterback rushes.