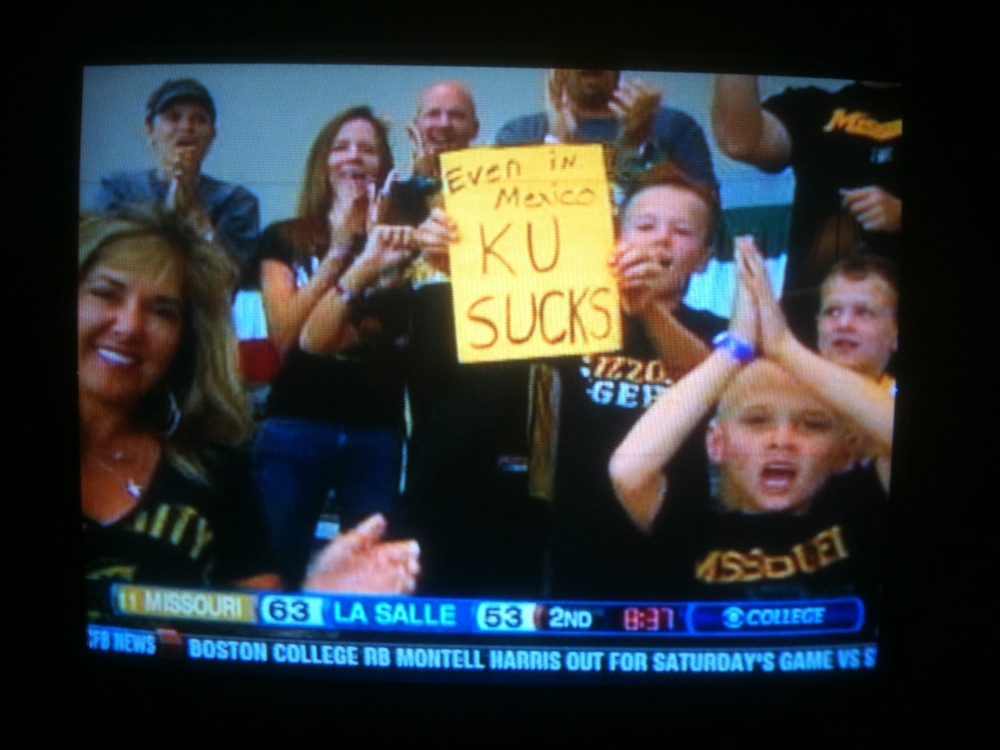 Your Trifecta: Denmon-Safford-Ratliffe.  Your winner: nobody!! Four people did have both Denmon and Ratliffe mentioned, however, so there's that.  And one person even had Denmon and Ratliffe in the right spots (with Bowers in between)!  But alas, no winner.

For Better or Worse, a True Mizzou-Style Win

Mizzou forced a ton of turnovers, crushed their opponent in BCI, got somebody hot from 3-point range, and cruised to a double-digit win (while missing a ton of chip shots and not really getting to the line enough).  If we described every Mizzou win from the past four seasons in one sentence, a majority of them would be described exactly like that.  However, there is one bonus feature here that is very encouraging for the rest of the season: Mizzou dominated on the offensive glass.  Against a big La Salle team (albeit one that has struggled to keep teams from grabbing offensive rebounds), this was lovely to see, even if it's easier to rebound against a zone.  If Mizzou keeps that up and does two other things that I'll mention in a little bit (TEASE!), this season could end up as good as we've been hoping.  We'll see.

What's Not Going As Well

Looking at player averages after four games is both fun and rather pointless -- one great or terrible game can change things significantly.  But it still bears mentioning that 1) Steve Moore is averaging 2.0 blocks in 12.8 minutes, 2) Bowers and Ratliffe are both over 7 rebounds per game, 3) Dixon and Pressey are both over 2 steals per game (and Pressey is only at 1.7 turnovers per game minutes the North Florida outlier), 4) Marcus Denmon is making 50% of his 3-pointers, and of course, 5) Mizzou is 4-0.  It's a lot easier to work through kinks when you keep winning.

Alright, now to Mr. English.  This team is developing some perfect role players.  Dixon and Pressey, while hot-and-cold from the field, are showing exactly the type of Pass-Shoot splits you would want to see from a point guard (though both can occasionally shoot too much, especially the freshman).  Ratliffe is the putback-and-score guy.  Bowers is the jack of all trades.  Safford is the "early buckets" guy.  Matt Pressey seems like at least a decent scoring option for the second team.  Kreklow is what Steve Moore would be if Steve Moore were a shooting guard, in that he does a couple of things that a player of his position needs to do, hustles like hell, and often completely disappears offensively.

But unless Marcus Denmon can consistently do what he did in Cancun, this team lacks something very important: a go-to scoring option.  (And even if Denmon were to become what he was in Cancun, he's still primarily a 3-point weapon -- 56% of his shots are 3's, he doesn't get to the line, and he's only shooting 42% on 2-pointers.)  When he's truly into the game, Kim English is all of the things this team needs.  He is a potential asset from long range, and all we read about this summer was how he tirelessly worked on his mid-range jumper and body control.  The goal was to master the art of easy points -- the Derrick Chievous Ch'i, so to speak.  And in four games against mostly inferior competition, English has scored a grand total of 32 points in 30 field goal attempts.  He is neither shooting efficiently ... or even shooting.  (As means of comparison, Justin Safford has attempted one fewer shot in nine fewer minutes.)  He did well in terms of overall box score contribution against Wyoming, and that's important, but he just doesn't look confident at all.  He is almost everything Mizzou is missing right now, and until he has a few breakout games, I am assigning him a permanent spot in the Three Keys to the Game list.

Aaric Murray and Jerrell Williams were a combined 9-for-18 and went just 2-for-5 from the line.  They also committed six turnovers.  That was huge.  La Salle's starting guards had a nice game, Ruben Guillendeaux and Earl Pettis, had nice games (11-for-17, 26 points), probably due in part to Mizzou's focus on the bigs, but it worked out for them in the end.

They did that.  And it was great to see.

The idea here was that Mizzou did Wyoming a ton of favors with turnovers, and they needed to be smarter with the ball.  Seventeen assists and six turnovers later, I think we can safely say Mizzou was smart with the ball.  The wrong people took too many shots, but that's a different issue altogether.

I really wasn't amazingly optimistic about this game.  Mizzou had been playing like a team that was itching to get upset, and when the Explorers went up 18-10, I began to somewhat expect the worst.  Instead, Mizzou outscored La Salle 73-55 the rest of the game and won going away.  In that sense, this was a great win even though there are still issues to address.  After a tune-up against UA-Pine Bluff on Sunday, it's time to prepare for the first huge game of the non-conference season: Georgetown in Kansas City on Tuesday.  Kim English, paging Kim English.  Your moment is coming soon.

AdjGS: a take-off of the Game Score metric (definition here) accepted by a lot of basketball stat nerds.  It takes points, assists, rebounds (offensive & defensive), steals, blocks, turnovers and fouls into account to determine an individual's "score" for a given game.  The "adjustment" in Adjusted Game Score is simply matching the total game scores to the total points scored in the game, thereby redistributing the game's points scored to those who had the biggest impact on the game itself, instead of just how many balls a player put through a basket.

Touches/Possession: Using field goal attempts, free throw attempts, assists and turnovers, Touches attempt to estimate "the number of times a player touched the ball in an attacking position on the floor."  Take the estimated touches and divide it by the estimated number of possessions for which a player was on the court, and you get a rough idea of how many times a player touched the ball in a given possession.  For point guards, you'll see the number in the 3-4 range.  For shooting guards and wings, 2-3.  For Steve Moore, 1.30.  You get the idea.