Kansas: Beyond the Box Score

Share All sharing options for: Kansas: Beyond the Box Score

Alright, let's just right in and get this one out of the way.  Hard to figure out what to say about this one that I didn't already say in the Diary.  Running game good, Kansas bad, etc.

We're actually going to start with something I found much more interesting than the typical BTBS box score.

Here are Mizzou's Run-Pass splits (standard downs and passing downs) for each individual game this season: 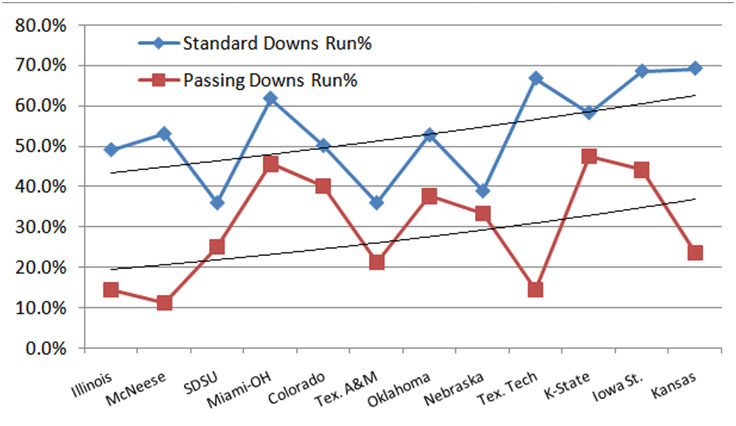 At the beginning of the season, Mizzou was throwing the ball at an almost Leachian rate -- they ranked among the bottom in terms of Run% on standard downs (or, to put it another way, they ranked among the top in terms of Pass%), and with the personnel they had in place, this makes sense.  There was no Derrick Washington, and three of the four members of the running backs stable were either new (Henry Josey, Marcus Murphy) or unproven (Kendial Lawrence).  With a golden-boy quarterback, veteran receivers (Wes Kemp, Jerrell Jackson) and two emerging, impressive targets (T.J. Moe, Michael Egnew), it made total sense to lean on the pass.

But as the season has progressed, Mizzou's running game has proven itself rather capable, and Mizzou's defense has been quite stout.  With this in mind, Pinkel and David Yost have adapted their gameplanning and play-calling to adopt a more conservative bent.

Individual games have individual stories (a lot of the passing downs runs against Nebraska were Gabbert scrambles originally intended as passes, while the Texas Tech gameplan was just odd in its predictability), but the season-long trend is obvious.

So the score played out basically as projected, only Kansas missed a field goal that would have made it a 25-point Missouri win.  (Nothing like having a bad team and iffy special teams that always digs you holes.)  Mizzou stagnated just long enough on offense for Kansas to keep things close (hence this week's fall in the S&P+ rankings -- you really have to kill bad teams quickly and precisely to avoid a tumble), but they were never truly threatened after the first two drives of the game.  Power to KU's defense for fighting back for a while, but the outcome was never in doubt.

Mizzou threw three times to the running back!!!  Granted, it only worked out well once (and that's because Kendial Lawrence made a one-handed catch of a poorly-thrown ball), but ... progress!  Meanwhile, the most interesting facet of the passing game was something I mentioned in the Diary.  Against the cloud of 8-man coverage that Kansas attempted, Mizzou ran a lot of bunch formations.  Four players would line up on one side, and Blaine Gabbert would either throw quickly to one guy on the bunched side (with the other three players blocking) or throw an out to the lone man on the other side.  They did this multiple times on third down, and I love how it simplified things.  Gabbert was getting some easier reads than he has at other times against large clouds of coverage, and it worked out well.  Third downs weren't actually Mizzou's worst down on Saturday!  (Again, it's a damn shame that Pinkel is stubborn and Yost doesn't know what he is doing.)

Granted, Gabbert still forced some passes and, really, seemed to struggle with focus on a couple of drives.  This resulted in only a 62% completion rate overall ... which against Kansas' defense, isn't great.  But when plays needed to be made, Mizzou made the right call almost every time.

I feel bad not mentioning the defense in this post, really, but I'm not sure what to say.  They took advantage of a bad offensive line and pressured Jordan Webb and Quinn Mecham all night, they blitzed effectively, and even when James Sims or Deshaun Sands (BOOOOOOOOOO!) got into the open field, they tackled really, really well ... as they have all season.  The fundamentals and communication have improved drastically for this defense this season, and that's great to see.

In all, despite the fact that Mizzou slipped in the rankings, it is hard to find much to complain about.  The defense stayed fundamentally sound, and the offense showed they can adapt to both their own strengths and their opponents' tendencies.  In the end, 28-point Border War wins are 28-point Border War wins, and I'll take one every year.