1 - Gut instinct: who wins tonight, Mizzou or Illinois?  And why?

2 - Gut instinct: is it football season or basketball season right now? You can only choose one.

3 - What was the better play: a fat guy returning a kickoff 70 yards in the Patriots-Packers game on Sunday, or a quarterback making a one-handed touchdown catch in the USM-Louisville game last night?

1 - My gut says Illinois.  Webber ALWAYS has that team ready, so I can throw out a bit of what I saw against UI-C.  They are BIG, and we have shown little interest of late in grabbing defensive rebounds.  While Dixon is playing, I do not know how much, and I do not think CMA is the type of coach who will push him back into 30+ minutes of work if he thinks he does not deserve it (which I am fine with).  The loss of Phil Pressey hurts and lord knows McCamy will want to finish his 7th Braggin Rights game with a win.  I think it is close, and I think it is maddening, and I think we lose.

3 - Did not see the one-handed catch by the QB, but the fat guy running 70 yards was a slow and amazing as you would hope it would be.

2. Basketball season. And you know how much it pains me to say that. As much as I love the bowls, college football season is largely finished once conference play ends.

3. Even though the Southern Miss play was awesome, I will ALWAYS give the nod to the fat guy near-touchdown.

4. Wow, Bill. That's not broad at all. Can we at least get categories or something?

Michael Atchison: 1.  My gut is torn.  Illinois is a bad matchup for Mizzou, but the Illini can also be surprisingly soft.  Last year, Missouri won the game without a low-post threat.  This year the Tigers have one.  It may come down to McCamey vs. Denmon.  But it also may come down to whether Kim English makes shots.  I think he does.  Tigers win, but it’s close.

Bill C.: 1 - For whatever reason, I'm thinking Illinois too.  My brain says Illinois' amazingly thin backcourt is going to suffer against Mizzou, even without Pressey playing, and I assume Mizzou gets another big-game rebounding performance like they did against Vandy ... but I'm still scarred from the 106-game losing streak against them, I guess.  Or was it only 105 games?

2 - For another three weeks, football.  Football!  Basketball is the undercard, albeit a great one.

3 - I'll always side with the fat guy runback, but a) that catch last night was ridiculous, and b) the fat guy was almost too fast for me to enjoy it.  When I heard about it and went to find it on NFL.com (which, by the way, is just incredible with the way it does video highlights), I was envisioning some guy running an 8.0 40, carrying seven tacklers for 30 yards.  This guy straight-up outran a couple of the coverage guys, which was both jarring and somehow disappointing.

4 - All of April 1 on RMN was splendid, to be honest.  So we'll say it's a tie between a) April 1 on RMN, 2) The Roots' "How I Got Over" (the song, not the album, though the album was ridiculous), 3) The Moe Miracle (about as sudden a crowd pop as you'll ever hear), 4) "I'm Ehren Earleywine, and I have tremendous stubble," 5) Celebration Dog, 6) Kanye's and Cee-Lo's recent singles, and 7) my discovery of No Reservations and the realization that I can enjoy both Anthony Bourdain and Guy Fieri.

By the way ... it's really unfair for one band to be this good.

Bill C.: That was the goal.

The Beef: As they were treating my favorite Christmas song (yes…you read that correctly), I will say they did a wonderful job not over-complicating it at all as they MIGHT have with all their wonderful range and talent.

ghtd36: AS SOON AS I GET BACK TO MY COMPUTER, I'M TAKING YOU TO TASK, YOU FIERI-LOVING CALCULATOR JOCKEY!

Sent from my iPhone. Please excuse the brevity.

The Beef: The anticipation is killing me…but wont read as well later

At what point did we lose Doug?

(Ed. note: I apparently completely left Doug off of the roundtable today. Which ... well, I make at least one mistake per week on this damn roundtable.  One time I accidentally e-mailed Dave Matter instead of ZouDave. He didn't send us any answers.  Anyway, don't hate me, KU Doug!  Any more than usual, anyway.) 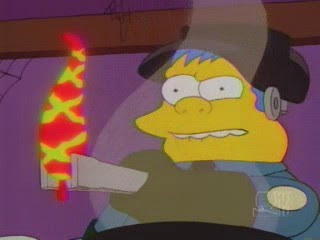 Michael Atchison: Different topic.  Just came across a story about Nebraska basketball attendance.  How many of their 23,500 students do you think hold season tickets for men’s basketball?

The Beef: Wow.  Guess they are hoping that new, downtown Lincoln building will bring in more of the common folk?  935…good lord.

Michael Atchison: And the cost is $2 per game with a schedule that includes USC, Creighton, TCU, Mizzou, Kansas, K-State, Texas, Texas A&M and Oklahoma State.

Guy Fieri brings a big bag of nothing. He's edgy and nothing else. His cooking is average at best, and I've never said, "Oh, Guy Fieri's on, I better write down this recipe!"

And RPT will bring up some beer can chicken or somesuch, but one recipe does not a great cook make. The fact is that he's more likely to make EXTREME FAJITAS that taste like normal fajitas than he is to whip up something that is going to knock my socks off.

He's, without a doubt, in the bottom 25% of Food Network hosts, and the fact that he hosts "Minute to Win It," perhaps the most blatant piece of Idiocracy this side of Mike Judge, only serves to solidify my argument that he's a walking, talking SNL character.

(Ed. Note: Everything he says is true, especially the part about "Minute to Win It," a show so incredibly dumb that the commercials made me lose IQ points. But I'll unapologetically watch Diners, Drive-Ins and Dives re-runs at all hours of the day. Or, any time that No Reservations re-runs aren't on, anyway.)

In fact, I'll say it: "King of the Hill" is the most underrated show of the past decade.

ZouDave: 1 - illinois.  They win this game, thats what they do.  We can win, but with out pg troubles i dont think we will.

2 - football season never ends.  Everything relates to football.  Its either the season, pre-season, post-season, etc.  Basketball is awesome, but football rules the world.

3 - fat guy scoring, even if it did make me flash back to the troy linemen scoring agains mizzou in 2004.

4 - landon donovans goal against algeria in the world cup.

1 - Illinois wins in a way that will make Mizzou fans want to bash their own heads in. Something like Bruce Weber suiting up and hitting a half-court shot at the buzzer to win by one.

2 -It's football-ball season, only because I'm excited about Mizzou's bowl game. Last year? It was basketball season by now.

Michael Atchison: I’m clearly in the smallest of minorities on the Kanye album, so I’m sure the problem is me.  But to my ears it’s what The Godfather would have been like had it been about Fredo.

The Beef: A bit slow and slightly retarded?

…someone had to say it….

/has never listened to a single Kanye album

Michael Atchison: Pretty much.  A grand, ambitious effort built around the ramblings of a dimwit.

ghtd36: You can enjoy the music without enjoying the human making the music.

The Beef: An oddly similar principle can be attached to, “Better Know…”

ghtd36: Ah, Beef. Scoring in garbage time. You're like our Jarrett Sutton.

The Beef: You never notice me until you see my stat line at the end of the night as proof I was actually there…like Ratliffe at times of late

/will save this roundtable yet

Michael Atchison: But the whole album is that human being psychoanalyzing himself.  And he’s not that interesting a character.  And he’s an abominable rapper.

Huh. Well, suffice to say that I disagree.

/just throwing out anything he can at this point

/feels good about this one

ghtd36: I don't think that Kanye West is the greatest rapper alive or anything, but to call him "abominable" and "atrocious" seems like a gross overstatement.

Somehow, I feel like I'm fighting an uphill battle against someone who dislikes an album not in spite of its relative popularity and critical acclaim (perfect scores from both Rolling Stone and Pitchfork, though they're hardly judge and jury), but because of it.

Michael Atchison: I told you I’m in the minority and that history will probably judge me a fool, but the album does little for me.  Keep in mind, I’m not the biggest hip hop fan, but I’ll take this year’s Big Boi and (especially) Roots albums over Kanye any day.

And it’s not a battle.  I’m not trying to persuade you.  I’m not opposed to anyone enjoying it.

ghtd36: STOP YELLING AT ME. YOU'RE NOT EVEN MY REAL DAD.

Bill C.: My contribution (an hour late): I love that Kanye takes chances, both musically and lyrically.  When his verses work, they're some of my favorites of all-time.  When they don't work, it's like listening to some junior high kid at Rock Bridge trying to rap.  I love that he's trying, though.  Most people just try to sound like everybody else.  He does not.

I'll also say that his album wasn't my favorite of the year.  After hearing 3-4 songs, I assumed it was going to be the greatest hip hop album of all-time ... but the rest of the album was only decent.  The Roots, Talib Kweli and maybe Big Boi or Gorillaz all had better albums this year.