No idea what to say about yesterday's K-State ending that hasn't already been said.  We saw about six touchdown celebrations YESTERDAY that were more "excessive" than the one that was flagged, and I think the refs' weary "It's in the rulebook, just shut up already" response is incredible (considering other celebrations that took place even in the same game).  I know the game doesn't really matter, but ... damn.

Also check out Big 12 Hoops' Top 5 Mike Anderson wins as a Tiger.  I very much disagree with the list ... but I love that there are enough to make a pretty good list at this point. 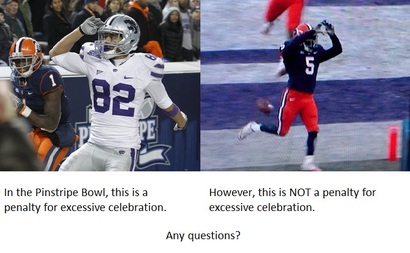