Your Trifecta: Dixon-Denmon-MPressey. Your winner: nobody! CBonerfied came close, but alas ...

I'll say this right out front: I was more impressed with Missouri last night than I have been all season.  Old Dominion is a damn good team, and they played like it ... but Missouri still controlled the game almost the entire time, and once the ninth round rolled around, ODU was done.  Against good body punchers, your body knows that you're screwed before your head does.  It feels like you're hanging around, and you still know what you need to do ... but suddenly your reflexes are shot, and your defenses fail, and your legs go ... and you hit the ground.  Last night was a ninth-round knockout.  For all intents and purposes, Mizzou was Mike "The Body Snatcher" McCallum, and ODU was Michael Watson.

One of My Favorite Knockout Sequences in the Anderson Era 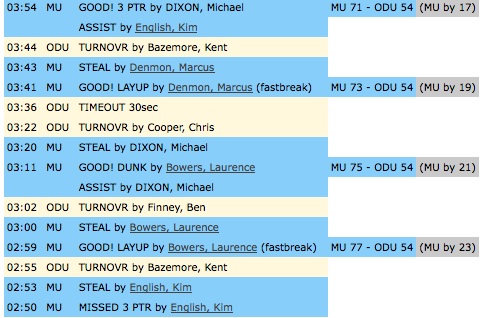 Yeah, that was fun.  And because I'm greedy, I was actually a little disappointed when English's 3 didn't go down.

In terms of expected rebounds, Old Dominion technically outrebounded Mizzou by one last night.  But considering ODU was almost +7/game in that category, Mizzou won that battle hands down.  ODU is not an amazing shooting team, and rebounding almost half of their misses is what wins them games.  They simply could not get it done against Mizzou, and I have to credit three unexpected sources: Mike Dixon, Matt Pressey and Justin Safford.  While a random big did his best to box Frank Hassell and Chris Cooper out of the zip code, Dixon and Pressey hung back long enough to combine for nine defensive rebounds.  Laurence Bowers and Ricardo Ratliffe combined for five.

Meanwhile, I am beginning to love the role Justin Safford has created for himself on this team.  As you'll see below, his direct impact on the box score was iffy at best; but he has carved out a beautiful "What does this team need today?" niche for himself.  Against Illinois, Mizzou desperately needed somebody to step on offense in the second half while the Illini were getting hot; Safford did it.  Against ODU, Mizzou needed somebody to play physical, throw his body around, and simply set the "We are going to hustle our asses off" tone; Safford did it.  His offensive game was atrocious, but he played a direct role in softening ODU up for the knockout blow.

For all intents and purposes, Mizzou had four main contributors and five guys doing the dirty work.  Foul trouble made a no-show out of Laurence Bowers, though he did make his four points count, making two easy buckets during the knockout sequence.  Meanwhile, Ricky Kreklow threw his body around, Steve Moore bodied up Frank Hassell, and as I mentioned above, Justin Safford brought the lunch pail.

In the last two games, Matt Pressey is 12-for-18 from the field and 9-for-12 from the line.  He has somewhat abandoned the 3-pointer (0-for-3), and that's fine.  Mizzou needed a slasher, a guy who, like J.T. Tiller last year, can lower his head and get to the rim occasionally; Pressey apparently said "I can do that!" and has taken Mizzou from good to great.

Gotta say: I love Mike Dixon coming off the bench.  It apparently suits M. Pressey well to start, and in three games off the bench now, Dixon has played 80 minutes (clearly he is a "bench" player in name only) and scored 36 points on 11-for-20 shooting (4-for-7 on 3-pointers) while throwing in 18 assists and seven steals, with a BCI of 3.57.  Remember how Laurence Bowers was great "off the bench" last year?  We've got Dixon to do that this year, apparently.

So ... with Phil Pressey hurt and Mike Dixon coming off the bench, who's officially the starting point guard?  Kim English?

(By the way ... nothing to do with nothing, but I really, really like ODU's Kent Bazemore.  Along with Oral Roberts' Dominique Morrison, he might be the best "Would love to see him in black and gold" player Mizzou has encountered this year ... outside of half the Georgetown roster, anyway.)

I love tracking these stats on a game-by-game basis.  It's fun seeing how players' roles change depending on the opponent.  Clearly this was a game for the guards to shine while the bigs threw their bodies around and focused on blocking out and rebounding.  Your highest %Pass for the game: Ricardo Ratliffe.  Awesome.  Meanwhile, Denmon's Usage% was much higher than normal, though I doubt anybody will complain about that.

By the way, the shots didn't fall for him yesterday, but this distribution -- 43% pass, 37% shoot, 16% fouled, 4% turnover -- is pretty much exactly what I want to see from Kim English moving forward.  He seems to have happily ceded the role of primary scorer to Denmon, and that's obviously fine; he still seems to be overthinking things with his new role of half-facilitator, half-secondary scorer, but he's getting there.  Oh, and that turnaround-drop-step move he uncorked in the second half yesterday for a layup?  More of that, please.

Yeah, as mentioned above, Mizzou R-E-B-O-U-N-D-ed.  It was very, very cool to see it.  They knew they had to get nasty, and they did.

Yeah, so I whiffed on this one, at least statistically.  Or did I?  Bowers and Ratliffe combined for just 14 points, seven rebounds (two offensive), one block, and no trips to the free throw line.  BUT ... Frank Hassell and Chris Cooper, two of the 20 or so best offensive rebounders in college basketball, combined for one offensive rebound.  One!  Oh yeah, and seven turnovers.  The bigs had to take that aspect out of ODU's game, and Bowers and Ratliffe helped to do just that.  Too bad they didn't show up, huh?

Mizzou won the BCI battle, 2.20 to 0.67.  Combine that with ridiculous long-range shooting and an even battle in rebounding, and ... well, you get a 23-point win against a good opponent.

In case you hadn't noticed, Mizzou is now No. 17 in Ken Pomeroy's rankings.  Less than a month ago, they were No. 40.  Beginning with the Georgetown game (and subtracting the exhaustion-aided near-collapse late against Oregon), this team has played like one of the best in the country since November 30, and ... well, not to be Commander Obvious or anything, but that's a very, very good thing.

AdjGS: a take-off of the Game Score metric (definition here) accepted by a lot of basketball stat nerds.  It takes points, assists, rebounds (offensive & defensive), steals, blocks, turnovers and fouls into account to determine an individual's "score" for a given game.  The "adjustment" in Adjusted Game Score is simply matching the total game scores to the total points scored in the game, thereby redistributing the game's points scored to those who had the biggest impact on the game itself, instead of just how many balls a player put through a basket.

Touches/Possession: Using field goal attempts, free throw attempts, assists and turnovers, Touches attempt to estimate "the number of times a player touched the ball in an attacking position on the floor."  Take the estimated touches and divide it by the estimated number of possessions for which a player was on the court, and you get a rough idea of how many times a player touched the ball in a given possession.  For point guards, you'll see the number in the 3-4 range.  For shooting guards and wings, 2-3.  For Steve Moore, 1.30.  You get the idea.