Just like it's never truly football offseason here at Rock M Nation, football season never really ends for any of SB Nation. Whether it's the Rams, Chiefs, Bears, Cowboys, or for long-tortured Bill C., the Dolphins, there's an SBN community awaiting your NFL hot sports opinions.

Right now, NFL Draft talk is hot and heavy, and the SBN College blogs are here to help. To help supplement coverage at The Mothership and at Mocking the Draft, the various SBN college blogs will be providing draft profiles for their first and second round talent. For us here at RMN, that's just another excuse to talk about one man: Franklin DeSean Weatherspoon, or alternatively, "SPOOOOOOOOOOOON!" 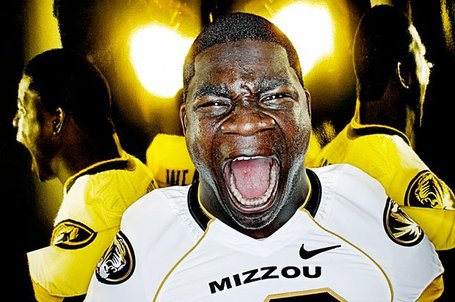 Greatest photo ever, courtesy Nick King of the Columbia Tribune

THINGS THE PROS GET RIGHT: If you're a non-Mizzou fan that watched the NFL Network's Senior Bowl coverage, the odds are that you got sick of either A) Sean Weatherspoon's voice or B) NFL Network commentators talking about Sean Weatherspoon's voice. As far as vocal leaders are concerned, you may not find one better than Spoon. He was the heart and soul of the Missouri defense for his final two seasons and had a co-starring role in that regard during his sophomore campaign. He has great football instincts, as he's one of those 'backers that just somehow seems to find himself near the ballcarrier by play's end. No matter which way they went, Spoon's ability to go sideline-to-sideline meant that teams really couldn't run away from him.

But the pros are right in less flattering ways as well. First and foremost, his biggest red flag is that his instincts can also get him in a little bit of trouble, particularly in playaction. He has a tendency to get sucked in on the playfake. He was able to utilize his athleticism to overcome this most times in college and work his way back into position, but that could spell trouble at the next level until he fine-tunes this part of his game. There's also a little bit of his concern about his ability to get off of blocks. I can't expound on exactly how much of a red flag this is, but as with a large number of linebackers with his speed, he's much more effective in space.

THINGS THE PROS GET WRONG: I'm a little baffled about the concerns regarding Spoon's utility in pass coverage. Yes, the majority of his value is in his ability to stop the run, but I think he's less of a liability in coverage than scouts are making him out to be. He's fantastic at reading quarterbacks' eyes (which, again, may get him in a little bit of trouble at the next level), and he's fairly fluid for a guy of his build and his hands proved rather solid during his tenure as a Tiger. For proof, we submit Spoon's interception and pass breakup (while running with Dexter McCluster) from the Senior Bowl:

NON-FOOTBALL THING YOU MAY FIND ENDEARING/CHARMING/INTERESTING: If nothing else, you'll find out that the kid is simply a fan favorite. You really couldn't help but love watching the unheralded two-star kid from Jasper, Texas mold himself into one of the top linebackers in the country and one of the most genuinely likable personalities this university has ever seen. And, let's face it, your favorite franchise NEEDS this kind of vocal and dancing talent:

If you really want to know about Sean Weatherspoon as a person, I can't recommend the inestimable Dave Matter's defining feature highly enough. I don't think there's been a clearer picture painted of who Sean Weatherspoon really is, although it is also evident in this Senior Day feature about his family, a day that reduced the normally gregarious Spoon to tears.

TOTAL SUMMARY GRADING OF OVER/UNDERRATED: In all honesty, I think Weatherspoon is properly graded, in my admittedly amateur estimation. He's a very solid pick that can step in and contribute on both defense and special teams but may not be ready to shoulder the load of leading a linebacking corps yet. He's got a few flaws and deficiencies in his game that may require some coaching, but his football IQ, his passion for the game, and his field presence can't be ignored. Hopefully some team late in the first round or early in the second round will grow to love the Spoon we all came to appreciate in Columbia.

I CAN HAZ LINKS? Yes, you can: