Study Hall: Mizzou vs Nebraska -- I expected this in Lincoln ... but not now!

Share All sharing options for: Study Hall: Mizzou vs Nebraska -- I expected this in Lincoln ... but not now!

Your trifecta: Tiller-Bowers-Ramsey.  Your winner: nobody.  Is there any other way?

For those who think Mizzou is suddenly on the bubble or in danger of missing out on the tourney field now, let me just point this out.  Below are the eight teams on Joe Lunardi's "Last Four In" and "First Four Out" lists, with some general info on their rankings:

(Oklahoma is exactly #100, while Nebraska is #92, so obviously Mizzou has come close to a couple more really bad losses.)

Five of the teams on the above list will be selected in the Field of 65, four if there's a tourney surprise.  No matter how you want to rank them, Mizzou is absolutely one of those four/five, and it's not even close. They have the #3 RPI, the #1 Conference-Only RPI, the #1 Ken Pomeroy rank, the second-most wins over Ken Pomeroy's Top 50, and the third-fewest losses against teams ranked outside of Pomeroy's Top 100.  And they won ten games in the second-best conference in the country.  Come on.  You can worry if you want to, but Mizzou's in, and it's still not close.  I realize they could be punished for struggling without Justin Safford ... but it would be a complete, grade-A traveshamockery (it's still hip to make that reference ... right?  Ri...right?) for five of the teams on the above list to be selected above Mizzou.  There is no justification for it whatsoever, Safford or no Safford.

Anyway, to the game.

Remember a couple of years ago...

...when a Mizzou team that ranked 137th in the country in Effective FG%, shot 70% in the second half (56% for the game) in scoring 97 points on a Texas team that had one of the best FG% defenses in the country?  Yeah, let's just say Nebraska's shooting performance against Mizzou in KC made that performance look underwhelming and sub-standard.  This was almost "OSU against KU" level over-achieving.  Let's take a look:

So against a Mizzou defense that ranked 34th in Effective FG% allowed (69th on 2-pointers, 20th on 3-pointers), Nebraska was unstoppable.  They made a host of well-covered shots, and they were absolutely masterful at running down a large portion of the shot clock, making the Mizzou defense work, making the extra pass, and making their jumpers.  It forced MIzzou's offense to play at a high level, and ... yeah, Mizzou's offense hasn't played at a high level in a while.  You could certainly point to lethargy on Mizzou's part -- they were certainly a step slow on multiple 3's, and they were just out of position enough to either open up a shot, commit a dumb foul, or both.  But sometimes you have to make sure to give a ton of credit to your opponent, and Nebraska picked a really inconvenient time to play like I expected them to play when Mizzou went to Lincoln a few weeks ago.

Please use these extra days off to get the legs on your jumper back.

The running theme now is that the loss of Justin Safford has crippled the Missouri offense.  I have two responses to that: 1) I have no evidence that it hasn't crippled the offense -- in fact, four of Mizzou's worst offensive performances of the season have come in Safford's absence -- but 2) Mizzou's offense has stunk because Zaire Taylor, Marcus Denmon and Kim English have stunk ... and can we really pin that on Safford?

Or in per-game graph form (with 5-game moving average)... 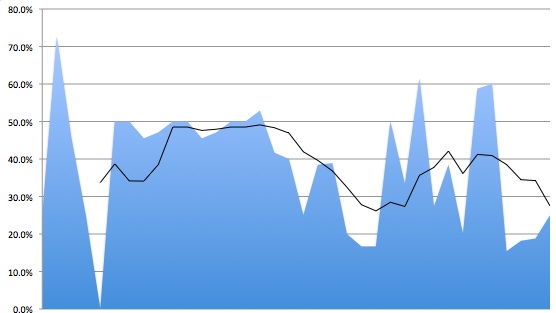 To me, there are two things going on here.  First, these three players are simply entering their second major slump of the season.  The three have shot 19.6% from long range over the last four games, which is quite reminiscent to their three-game span in January (from OU to Kansas), when they shot 18.2%.  (Obviously Safford was in the lineup at that point.)  Their five-game moving average is right back down to where it was then.  If you're a silver-lining kind of person, the three broke from that slump by shooting 48% on 3's over the next three games.  (And if you're a glass-half-empty type, you could point out that Safford had a nice run of 9.7 PPG on 50% shooting in those same three games, potentially opening up the 3-pointers a bit.)

Second, if you look into the game-to-game stats a bit, you do notice a little bit of a trend in regard to the quality of the opponent:

This seems to lay a bit of my own suspicions to rest, which were that the opponent really doesn't matter.  Against better 3-point defenses, these three tend to shoot worse.  Go figure.  Mizzou might be a lot more predictable than we thought.  Of course...

Eh???  Against Nebraska alone, these three shot 16.7%, 58.8%, and 25.0%.  Lesser defenses brought out a bit of schizophrenia from Taylor, English and Denmon, be it a focus problem or what have you.  The good news in this case, of course, is that Mizzou won't likely be playing a 300+ ranked team in the NCAA tournament, so we should know what to expect.

In fact, here are the current teams seeded #7-10 by Joe Lunardi (a.k.a. Mizzou's likely next opponent), along with their 3-point defense rank:

So when you're tuned in to Selection Sunday in a few days, root for a) Mizzou to be in the field (you know ... just in case), and b) a Cornell/Louisville/Gonzaga/UNLV draw in the first round, followed by a Purdue/tOSU/WVU draw in the second.  St. Mary's, Wake Forest, Clemson or UTEP could mean a very short stay for Mizzou in the NCAAs.

As for Safford ... well, he's almost certainly not coming back, so it doesn't really matter what effect he has or hasn't had on this team.  If Mizzou has a chance of making noise in the NCAAs, it's pretty clear they're going to need to face a team that offers as many open looks from long-range as possible because we're taking them whether we make them or not, and while our three main trigger-pullers are in a slump at the moment, they're potentially the only chance we've got here, eh?

* AdjGS = a take-off of the Game Score metric (definition here) accepted by a lot of basketball stat nerds.  It takes points, assists, rebounds (offensive & defensive), steals, blocks, turnovers and fouls into account to determine an individual's "score" for a given game.  The "adjustment" in Adjusted Game Score is simply matching the total game scores to the total points scored in the game, thereby redistributing the game's points scored to those who had the biggest impact on the game itself, instead of just how many balls a player put through a basket.

Mizzou dominated the BCI battle, committing only four turnovers all game.  And in the end, because of that, they averaged a reasonable 1.04 points per possession.  But Nebraska's 1.30 points per possession was the highest MU gave up all year (by far), so clearly NU did enough in terms of ball possession to win the game.

So on top of Mizzou's only semi-efficient offense and Nebraska's unconscious shooting, NU got a little luck as well -- of the six deadball rebounds in the game, five went to Nebraska.  As a whole, deadball rebounds are like fumbles in football; you should expect to recover about 50% of them.  Instead, Nebraska got a couple of extra possessions out of the mix, Mizzou a couple fewer.  If the deadballs were even, then NU only out-rebounded Mizzou by two yesterday.

What's this, you say?  The rebounding was 38-22 in NU's favor, you say?  That's the power of missed shots -- when one team (Mizzou) misses 18 more shots than the other, the rebounding is going to be skewed tremendously, simply because about 70% of all rebounds are of the defensive variety.  NU grabbed 16 more rebounds because Mizzou missed 18 more shots ... and because they ended up with 5 of 6 deadball rebounds.  You can believe rebounding killed Mizzou if you want, but in reality it was barely a factor.  If NU missed their typical number of shots, these numbers would have evened out significantly.

I think what stinks about this loss the most is simply that we were looking at three potentially great Big 12 quarterfinal matchups today, with MU-ATM preceding the OSU-KSU and UT-Baylor evening session.  Instead, it looks like the entire early session might be a snoozer, with KU likely taking out Tech with their patented "cruise along in third gear for most of the game, then kick it into fifth for five minutes and win by 15" routine, and NU likely regressing to the mean in a major way and getting their doors blown off by ATM.  I hope that's not true -- I hope we get two decent upset bids ... but I'm not getting my hopes up.

In all, we knew a loss like this was a possibility -- it's why you want to get a first-round bye in the first place.  Mizzou's tight losses to Baylor and ATM prevented them from the bye, and Nebraska's "nothing to lose" shooting made sure that a Mizzou team likely keeping one eye on the next round's game was in for more of a dogfight than they wanted.  Nebraska caught lightning in a bottle at a really bad time for Mizzou, and the Tigers were not ready to respond to the challenge.  (And had they responded better, it might not have mattered ... NU might have just made more tough shots.)

This loss should in no way prevent Mizzou from participating in their second straight NCAA Tournament, though we should probably come to grips with the fact that, if they are paired with a good 3-point% defense, or if they just plain can't shoot no matter the defense, we might be looking at only one more chance to see J.T. Tiller, Zaire Taylor and Keith Ramsey in action.  For all we know, they'll catch fire and play another couple of weekends, but at this rate I don't think you could find many people willing to bet on that.

Some teams peak at the exact right time (last year's Mizzou squad, for instance), and while this team could always turn things around at the last minute (2001-02 Mizzou), chances are we could be looking at a situation more like the 1989-90 Tigers, who peaked late in the regular season but couldn't rebound from an injury (Lee Coward's broken hand) and went limp, losing two of three to end the regular season, then bowing out in the first rounds of both the Big 8 Tournament (to the last-place team, no less) and the NCAAs.  It's possibly not too late for this team, but it might be, and we should be sure to soak in every last moment we can with the three seniors who helped bring this program back from the brink and ensured that, in Mike Anderson's fourth season, a 22-10 record would seem disappointing.