Part One: The Team Stats

Today we look at Mizzou's player stats for the season, what we can glean from some super-fun advanced stats, and ... style doppelgangers!!!

Let's start with the basic presentation:

What an odd team this was.  They averaged nearly 80 points per game, but only Laurence Bowers ended up averaging in double digits per AdjGS.  I have Mizzou data back to 1980-81, and that's the first time Mizzou has had only one person in double digits.  But then they had SEVEN guys between 6.6 and 9.8.

You could say this was both a strength and a weakness.  Strength: this was a true "team" with no stars -- they made the Round of 32 because of group effort, and that's always commendable.  Weakness: they had no idea from whom they would get a contribution on a given night.  None whatsoever.  Youth can be blamed for part of that -- when you've got three sophomores leading the way statistically, you're almost certainly going to be inconsistent.  But still, Mizzou had three seniors logging major minutes as well -- the problem, of course, was that none of the three were offensive dynamos (barring Zaire Taylor's work in the last 30 seconds of a game).  They contributed rebounds, assists, steals, etc. (and turnovers, ahem) to the box score every night, but the rarely lit up the scoreboard.

Heading into next season, the hope is that players going from their sophomore to junior seasons will develop a little more consistency, a little more confidence and initiative to bring the best version of their game to the table more often.

We'll see how big a deal it is that two of the three outgoing seniors (Ramsey, Taylor) averaged a higher overall box score contribution than just points.

Alright, now let's have some fun.

As always, with football steamrolling through October and November, the beginning of the basketball season sneaked up on me.  I intended to add some more fun stats to the general game-to-game wrap-up, but since I didn't have time to figure out which ones to use, I just went with what we established last year.  But now we're going to dip our toe into what else is available to us via the now-industrialized world of basketball statistics.  Below you're going to see a TON of them for each player.  We can discuss in comments which ones others find the most interesting, but let's define a few of them.

Versatility Index: This is a number found with the following formula: Versatility Index Formula=[(PPG)*(RPG)*APG)]^(0.333).  What you need to know about it: it is just a fun little way to see how much of a contribution a player makes to the box score in terms of points, rebounds and assists.  I almost made a Mizzou-specific formula taking steals and blocks into account as well but decided to keep with what is the most accepted version of the formula in the NBA stat nerd community (don't piss off the nerds!). This figure will do favors to a player like J.T. Tiller and his 9 PPG, 3 RPG, 3 APG average.

FTA/FGA: Free Throw Attempts per Field Goal Attempt.  The higher the number, the more often you get fouled.

OffReb% and DefReb%: Percentage of estimated available offensive and defensive rebounds a player grabs while on the court.  We've used this one here and there.

Touches/Possession: I discussed this a bit in Tuesday's post.  This is one of the neater ideas I've come across in a while.  Using field goal attempts, free throw attempts, assists and turnovers, Touches attempt to estimate "the number of times a player touched the ball in an attacking position on the floor."  Take the estimated touches and divide it by the estimated number of possessions for which a player was on the court, and you get a rough idea of how many times a player touched the ball in a given possession.  For point guards, you'll see the number in the 3-4 range.  For shooting guards and wings, 2-3.  For Steve Moore, 1.30.  You get the idea.

(By the way, the Touches formula was for NBA games, and I think it needs to be adjusted slightly for college.  I think it produces too many total Touches overall.  Regardless, the formula isn't for literally saying "So-and-so touched the ball exactly 2.6 times per possession -- it's more for creating baseline data everybody can be compared to ... and for that purpose, this is a lovely measure.)

Anyway, using the Touches figure, we can estimate the percentage of time a player "in an attacking position" passes, shoots, turns the ball over, or gets fouled.  What you'll see below are the %'s for each player.  We will then use that to help us find a player's "style doppelganger."

What's a Style Doppelganger?  A) It's something that probably only interests me.  B) It's what is derived when I compare a current player's per-possession and per-touch numbers to players in Mizzou's past.  I ran a ton of correlations between current and past statistics and found that Mizzou has had plenty of players similar to the current ones on the team.  We're going to distribute these players into a series of posts.  Today: next year's likely starting bigs.

For a double-digit scorer, Bowers was a pretty good sharer of the ball.  He touched the ball pretty often for a "big man," and he almost never forced the issue.  His "fouled" rate probably needs to improve in the future -- he's never going to be a mauler like a Kalen Grimes (31%) or Kevin Young (26%), but if he could just get to the 17% range like a Buck Grimm or DeMarre Carroll, then even with only 65% free throw shooting, he could pretty easily get into the 12-13 PPG range while still passing a good amount.

In all, I'm not sure I see Bowers becoming a "go-to" option for the Missouri offense, but when you think about it, this team doesn't really need go-to options from their bigs.  Bowers' passing rate was almost exactly where DeMarre Carroll's and Leo Lyons' were in 2008-09, but if he can just draw a little more contact at times, he'll be what Mizzou needs -- he's a good passer, and his turnover rate is outstanding, so there's a lot to build on here. 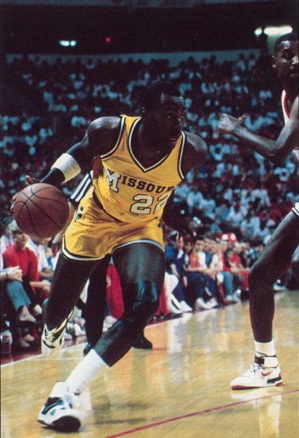 The sophomore version of Nathan Buntin was extremely similar to senor Bowers.  In 24 minutes per game, Buntin averaged 9 PPG and 5 RPG, with an assist and a steal thrown in for good measure.  He didn't block as many shots as Bowers, but his touch-related rates were 37% pass, 45% shoot, 11% foul, 6% turnover.  He shot 53% on 2-pointers and didn't take any 3's; his foul rate suggests he still took quite a few mid-range jumpers or longer ... just no 3's.  In all, Buntin was athletic and pretty well-rounded, and he would have fit into this system pretty well.

I had quite the love-hate relationship with Justin Safford this year.  Okay, that's extreme -- call it a like vs somewhat-dislike relationship.  Regardless, Safford's strengths and flaws were both on display quite often.  He did not grab enough offensive rebounds, and he shot too many jumpers and made too few of them ... but he asserted himself offensively at times when no other Mizzou player would, and his absence was certainly noticeable (though to what extent, we all seem to slightly disagree) after he got hurt.  Safford really does tend to personify the "guard trapped in a power forward's body" mentality, but that has as many positive effects as negatives, I think.

(By the way, did you notice how Safford's per-touch splits are almost exactly the same as Bowers'?  I was a little shocked by that.  It seemed like Safford shot, got fouled and turned the ball over more than Bowers, while Laurence passed more.  I stand corrected on that assumption.)

In all, if Safford is going to continue to improve his senior season (this assumes full health for his knee ... which in this day and age, is a pretty safe assumption, I think), he just needs to learn to play slightly more like a big man.  If he can grab just one more board per half and get maybe one more easy shot out of it, his percentages will improve enough that he is extremely valuable.

That's right -- as Buntin's role shrank in his junior year, he started taking more jumpers, drawing fewer rebounds, and drawing slightly less contact than he did as a sophomore, when he more closely resembled Laurence Bowers.  And since Bowers' and Safford's per-touch splits were almost identical, the same name from Mizzou's past popped up.

Buntin was streaky as a contributor, and the biggest difference between the junior versions of Buntin and Safford is that Buntin's Usage% was only 16%.  For mostly better and sometimes worse, Safford was more assertive in the offense than Buntin.

I do find it amusing that Buntin has shown up twice on this list, though.  Clearly he was 20 years before his time as a player.  Safford drew close correlations to two other late-'80s players as well -- Jamal Coleman and Byron Irvin, two 6'5 guard-forwards with completely contrasting styles.  Justin Safford is an interesting player.