Part One: The Team Stats
Part Two: The Player Stats and Style Doppelgangers

Today, we look at a couple more players in the Style Doppelgangers portion of this series ... two guys whose development could take Mizzou from good to "frightening" if they take the right path.

For insight into some of the stats used below, click on the "Part Two" link above.

It should surprise absolutely nobody that English's Usage% was easily Mizzou's highest this year; it's pretty clear that he's the go-to offensive option (when he's on, anyway), and he really, really wants to be The Man on this team.  It should be noted, however, that he is still team-focused enough to succeed in this system.  He does not fit the profile of some of Mizzou's true gunners -- players like John Woods (62%), Mark Atkins (54%) and Matt Lawrence (54%) had much higher %Shoot figures than English did in 2009-10.  He also drove and got fouled more than the typical gunner, and his turnover rate for this style of player wasn't bad either.

You'll notice that his Floor% of 34% was much lower than Bowers' 46%.  This is to be expected from the more long-range based shooters.  When 3-pointers get involved, your Floor% is going to go down, as the 3 is a high-risk, high-reward shot.  His points-per-individual-possession figures were just as high as Bowers', but obviously 3's aren't tremendously efficient. 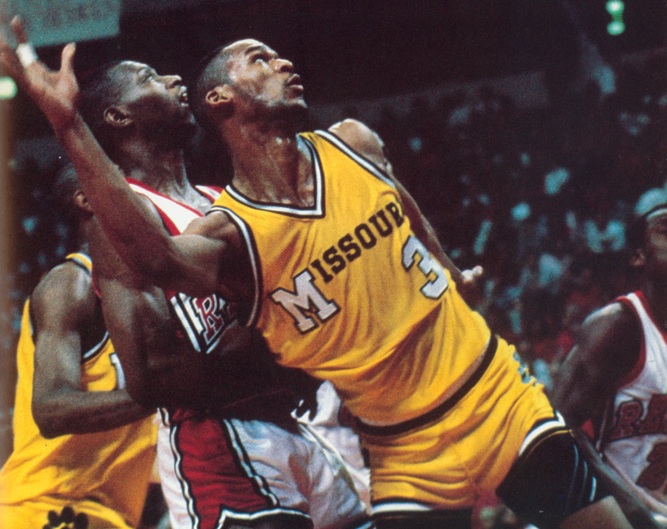 I'll give you a second to tamp down either your "HOLY CRAP FINAL FOUR 2010-11" excitement or "HOW DARE YOU COMPARE THESE TWO" rage.

So the sophomore most similar to Kim English's style was Derrick Chievous, the most explosive scorer in Mizzou history.  I find this interesting to say the least.  Chievous was a more efficient scorer, averaging 18.8 PPG and 1.48 points per shot (English: 1.20) as a sophomore.  The 3-pointer wasn't in existence at the college level until Chievous' junior year, and with a smidge more size than English, Chievous drove more, took more mid-range shots, and with superior body control, got fouled a rather insane amount.  It was the nature of the mid-1980s game as a whole, but Chievous in particular was outstanding at it.

Chievous' per-touch splits: 29% pass, 43% shoot, 20% fouled, 8% turnover.  The per-touch styles for these two lanky East Coasters are EXTREMELY similar, with the only difference coming in the %Shoot and %Fouled figures.  Now, this obviously doesn't say that English can match Chievous' productivity ... but watching some film of Chievous and how he was able to draw contact while maintaining body control and shot accuracy wouldn't be a bad idea, especially since they have almost exactly the same body type -- Chievous was a lanky 6'7, 190 or so.

(Chievous was also an incredibly good rebounder, especially for his size, so if some of that rubbed off on Lord Baltimore too, I wouldn't object.)

Okay, so Kimmie is similar in style to the Band-Aid Man.  Two questions: 1) Chievous was potentially the greatest scorer in Mizzou history (okay, not potentially ... he was) -- what does Kimmie need to do to take the leap toward Chievous Land? 2) Is a Chievous-type of player what this team needs?

I'll answer #2 first: Yes.  YES.  What made Chievous such an impressive scorer was his efficiency -- he wasn't taking every shot on every possession; he was passing quite a bit and involving others in the offense (the pace was high enough on those mid- and late-1980s teams that while he was scoring a ton, so were others -- his sophomore year, he averaged 18.8 PPG while Jeff Strong averaged 18.5 and Dan "Bingo" Bingenheimer averaged 15.3).  He was just preternaturally inclined toward getting fouled.  The only wing players who tended to get fouled as much as Chievous were Justin Gage and Moon McCrary.  He was the master of grabbing free points where available.

This system is not necessarily built for a ball hog, but in DeMarre Carroll's absence, we saw this team's offense suffer without a consistently strong scorer (Carroll scored in double figures in 34 of 38 games last season, while English did it in only 22 of 34 games this year, including only four of the last eight games -- their scoring averages were only a couple of points apart, but Carroll was infinitely more consistent).  Of all the players returning for next year's squad, clearly English is the most likely (and necessary) to take up the position of go-to scorer.

The answer to #1, then, should seem pretty obvious.  Because of the 3-pointer and Kimmeh's occasional hotness from long-range, English can score at a high rate without getting fouled quite as much ... but like Laurence Bowers, he needs to steal as many free points as possible.  English showed at times that he was still learning the art of drawing shooting fouls -- despite occasional efforts to draw contact at the top of the lane, he shot six or more free throws in a game just five times this year.  If he improves that part of his game while staying in control enough not to turn the ball over more, just increasing his free throw attempts per game from 3.9 to about 5-6, then he could easily reach the 17 PPG mark next year.  While he will never match Chievous' totals (nor should he try), he can maintain the style and control that made Chievous so successful ... and he will be exactly what this team needs.

(And on a side note, anybody who has never come across this January 1987 SI profile on Chievous -- particularly some of our younger readers -- has not yet lived.  "My mother says, 'Oh, but they wrote something nice about you.' But no picture. And you see these monsters on the magazine covers—soooooo appealing." "I shaved my legs with Neet that day. Or was it Nair?" "Steak daddy." "I can't understand this 'Let's go,' 'C'mon,' 'Rah-rah' stuff.  In the park, you've got 12 Pearls. If someone's not doing the job, another guy just does the work." "The face check is the best D.  That's when you get close to a guy's face and tell him what toothpaste he used that morning. 'Oooh, you used Crest!' Or, 'Oooh, you used Close-Up!' "  This dude was made for the internet age.  At Mizzou, he was a big enough star to warrant an SI profile in the first place, obviously, but now? He'd be Evan Turner + Chad Ochocinco.  He'd be huge.)

Looking at these stats, you see what looks like a pretty steady sophomore with pretty explosive scoring potential.  His shooting percentages were pretty good for a guard (well ... he needs to get that FT% up a little bit), his Floor% was higher than English's, he got fouled a decent (but improvable) amount ... not bad for a sophomore.

Oh, what could have been.  After 28 games, Denmon was up to 11.4 PPG, shooting 45% from 3-point range.  It looked like he may rival English for the team's #1 scorer in the near future.  And then he lost his shot like a set of keys.  In the team's final six games, Denmon shot 4-for-24 from long-range (he was 2-for-3 against Iowa State, 2-for-21 in the other five games), shot 30% overall, and averaged just 6.0 PPG.  He had been hot-and-cold all season, but in the previous six games, he had averaged 13.7 PPG.  That surge coincided with Mizzou's best hot streak of the season.  Then, not only did the Tigers lose Justin Safford for the season, but they also suddenly lost over half of Denmon's production.

Whether a broken nose was the cause for that sudden slip or not, Denmon really needs to become more consistent in 2010-11.  He scored 16 points or more nine times in 2009-10 ... and four points or less six times.  Obviously he can still be a contributor if he continues to misplace his shot for games at a time, but if he discovers how to bring his best game almost every night ... wow, is that a scary thought.

Want an even scarier thought? While we can't expect Kim English to be more than Chievous Lite, we really aren't that far away from a full-calorie version of Rickey Paulding roaming the wing with English/Chievous.

The similarities between these two players are a bit surprising.  Paulding went from averaging 7.0 PPG in 17 minutes his freshman year (Denmon's freshman year: 6.0 PPG, 17 MPG) to 12 PPG in 27 minutes as a complement to Kareem Rush and Clarence Gilbert his sophomore year.  Paulding's and Denmon's per-minute averages are rather startlingly similar at this point in their careers -- Denmon turns the ball over less and takes more 3's, while Paulding shot a higher %, grabbed more offensive rebounds (Denmon grabs more defensive ones) and got fouled a bit more, but their assists, steals, blocks, rates of committing fouls were almost exactly the same.  They even both made large steps up in 3PT% their sophomore seasons -- Paulding went from 21.4% his freshman year (he literally started something like 0-for-20) to 44.2% his sophomore year, while Denmon went from 30.4% to 40.7% despite the end-of-season funk.

You may also remember that Paulding took an extraordinary step forward his junior year.  Just saying.

Of course, we didn't need this comparison to know that Denmon's ceiling is still both high and completely undefined.  In the end, what will define Denmon is whether he can get his shot harnessed and accurate for an extended amount of time.  He plays under control, he lets the game come to him, and he slashes quite well (when he remembers to try), but he was just too streaky to truly be counted on this season.  When he got hot, Mizzou almost definitely won (they were 8-1 in the nine games where he scored 16 points or more).  When he was cold, they almost definitely lost (they were 1-5 when he scored four or less).  As with Bowers and English, it would be great if he could drive and draw contact more often (with the departure of J.T. Tiller, Mizzou needs a new slasher), but in the end, if he can just figure out how to get the ball to go in the hoop at a more frequent rate, and if the game slows down for him like it did for Paulding between sophomore and junior seasons ... well, let's just say that, as with Denmon individually, this team's ceiling is completely undefined.