So the 2010-11 Tigers might have clones of Derrick Chievous (Lite) and Rickey Paulding on the wings and two Nathan Buntins in the middle -- who's the point guard?  Let's look at the candidates.

We hold Mike Dixon and Miguel Paul in different regard -- Dixon is thought of as a 2010-11 starter, while Paul is considered a career backup -- and looking at the stats, it's almost hard to see why.  They shoot almost identical percentages (except from the free throw line), their per-touch splits are similar in the %Fouled and %TO categories, and the only characteristic that separates them is how much they shoot.

For better or worse, Mike Dixon appears to shoot quite a bit for a point guard.  Sometimes that's a good thing -- when Mizzou's offense was stagnant against West Virginia, Dixon lit a major spark and almost brought Mizzou even with the Mountaineers.  But it wasn't quite always a good thing -- in an attempt to find a similar spark in two games against Kansas, he shot 3-for-13 in 25 combined minutes.  Plus, he only had multiple assists once in conference play -- he had two against Oklahoma State.  He is young, and he still needs to learn how to balance the "scorer" and "distributor" pieces of being a good point guard (and Mizzou is best served with him at point guard -- we've already got Denmon and English on the wings).  I'm obviously optimistic that he can eventually find that balance, but it is extremely possible that Mizzou is a more hot-and-cold team next year while he gets his footing as a (likely) starter.

(Plus, now he has to deal with the high expectations that come with outstanding performance in the NCAA Tourney.)

Meanwhile, Paul's stats suggest he is the quintessential point guard.  His overall shooting percentages were actually better than Dixon, but he didn't shoot nearly as much.  He distributed the ball rather well, and he didn't turn the ball over any more than Dixon.  If there's a major reason why Dixon is ahead of Paul in most fans' eyes (other than speed ... WOW is Dixon fast), it is simply decision-making ability.  For all of Paul's strengths (and he has more than we probably give him credit for), his brain got in his way quite a bit.  Zaire Taylor has repeatedly raved about how hard it is to handle Paul in practice, but it just hasn't translated to major in-game success yet (Nebraska home game notwithstanding).  He would push the tempo at inopportune times, he would play great defense then commit a stupid foul, he would randomly try to assert himself as a scorer at the wrong moment (I still haven't completely forgiven him for his horribly-timed 3-point misfire against Texas A&M ... you know which shot I'm talking about).  He is not yet the consistent decision-maker this team needs, and while Dixon may still be learning how to be a college point guard and making plenty of mistakes in the process, his mistakes aren't quite the momentum killers that Paul's seem to be.

There is still time for Paul to grow and improve -- he's still only a sophomore.  And despite flaws, he still improved from averaging 0.19 AdjGS/min as a freshman to 0.28 as a sophomore.  He still has plenty of time to get a better sense of The Moment, and if he does, at the very least Mizzou will have a rather hellacious backup point guard for the next two years.

Of course, with Dixon likely overtaking him and Phil Pressey waiting on the horizon, some fans are assuming that MP3 might be transferring soon.  And who knows, maybe they're right.  But how he's handling the competition (and losing a good portion of the competition), only he knows.  We will not speculate about his intentions, and we'll learn soon enough whether he is to be a member of this team for two more years, or whether his nine minutes of action against Clemson were his last in a Mizzou uniform. 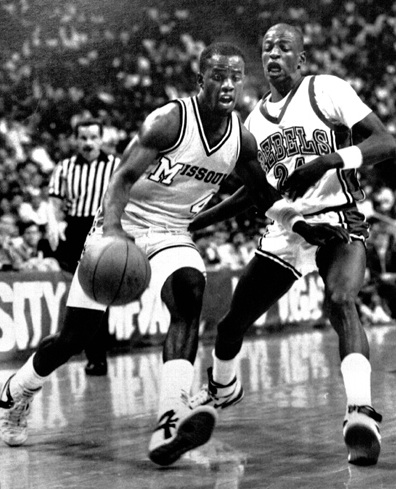 This is amusing.  We've run correlations for six current Mizzou players -- two have come up Nathan Buntin, and now two have come up Lee Coward.  Coward evolved from a Dixon-esque, shoot-first point guard in his freshman year (54% passing, 29% shooting) to a more Paul-like distributor in his sophomore year (68% passing, 19% shooting).  He learned the nuances of the position and improved from averaging 0.21 AdjGS/min as a freshman to 0.44 as a sophomore.  We can only hope that Mike Dixon follows the same trajectory.  And if either Dixon or Paul wanted to turn into a Coward-esque Kansas killer, I don't think anybody would object.

Do not underestimate the impact Mike Dixon's passing might have on this team's success next year.  As I mentioned in Part One of this series, Mizzou was 13-1 this season when their %Pass figure went above 50%.  And if it's going above 50%, the point guard has to account for quite a bit of that.  Dixon's stat profile suggests as much "shooting guard" as "point guard," and learning to balance his responsibilities as both a spark plug and a distributor could be absolutely essential to this team's growth in 2010-11.  Next year's Tigers will be an infinitely more experienced team (five juniors and a senior ... and potentially a sixth junior if somehow Ricardo Ratliffe comes aboard), but a sophomore could be the member of the team most vital to their overall improvement.