Today we look at the players who will likely line Mizzou's bench next season.  At least two of them will likely see increased playing time in 2010-11, but it is doubtful that they will start.  So with a starting five of Derrick Chievous, Rickey Paulding, Nathan Buntin, Nathan Buntin and Lee Coward starting (with Lee Coward also coming off the bench), who occupies Mizzou's second string?

I will be honest: I expected nothing out of Steve Moore this year.  Despite being a semi-honorary Truman Patriot (I know what seems like about half the Truman Classes of 1996-98 and went to Santa-Cali-Gon three times as a rite of passage ... mmm, giant turkey legs, funnel cake, and As Seen on TV display booths), I was completely unable to see him making a serious contribution, especially as a sophomore.  But while he clearly wasn't a star, he more than proved his worth, especially when Justin Safford blew out his ACL.

While he is still a little too limited (to say the least) offensively, Moore spent the first half of the season seemingly learning what is and isn't considered a foul, then absolutely wrecked shop defensively in the season's final seven games, starting with the Colorado game in which Safford went down.

Here are Moore's averages for those seven games: 14.0 MPG, 2.3 BPG, 1.9 RPG, 0.7 APG, 0.6 SPG.  Plus, he drew what seemed like about one charge per game.  He was invaluable on defense.  Now ... he clearly still had some gaping holes in his game -- he went 1-for-5 from the field and scored just two points (that's right, he had more steals than points), and considering Safford's absence led to the need for somebody else to step up offensively, Moore's complete invisibility on that side of the ball led to 4-on-5 offense and negated a lot of his positive defensive impact.  Moore doesn't need to average 10 PPG or anything to be important, but he at least needs to be a threat to score once a half.  Get him to 4-5 PPG, and with that defense, he could be an incredible weapon for Mizzou. 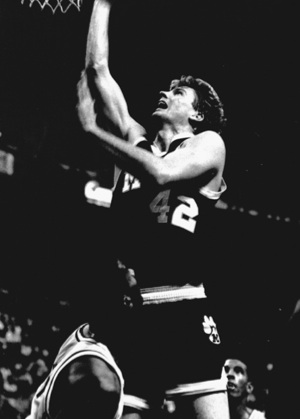 Granted, averaging more blocks than rebounds and more steals than points means that nobody is going to be tremendously close to Moore in overall style, but Sandbothe was surprisingly similar.  And if we're counting Nathan Buntin and Lee Coward twice, this means that six of seven Style Doppelgangers played on the 1987-88 Mizzou team.  Odd.

A quick summary of the greatness that was Mike Sandbothe: he was an outstanding defender, he was the ultimate "little things" player, he played in more games than any Tiger in history, and he was the model of consistency.  In four seasons, he ...

Despite the fact that Moore will probably never average more than 23.6 minutes per game, Sandbothe is the absolute perfect role model for Senor Rec Specs.  His Usage% was never higher than 13%, but playing with everybody from Derrick Chievous to Doug Smith to Byron Irvin to Anthony Peeler to Jeff Strong, his role was not to score.  It was to do everything else to clear the path for the scorers.  Still, though, he averaged 4.2 field goal attempts per game over his career, and that is basically what we need to see from Moore.

As with most of the players we have discussed so far, massive improvement or change in style is not needed -- Moore is 80% fine exactly the way he is.  But whether he gets a few more passes in the post in a given game, or whether he just hits the offensive glass a lot harder and nabs a putback or two (for as good a defensive rebounder as he is, an offensive rebounding % of 0.03 is just terrible ... there is literally almost no statistical proof that he even left Mizzou's side of the court when Mizzou was on offense), he just needs to do a bit more than simply exist on the court, and Sandbothe's game is almost a perfect example of how he can improve in that regard.

Now we battle small sample sizes to a pretty significant degree.  It's interesting, however, just how much players maintain their general style of play (based on the Touches measure) when they go from few minutes played to many.

Tyler Stone is a rather intriguing player.  He's beefier than either Laurence Bowers or John Underwood, and he showed nice strength and an overall skill set in (admittedly) very limited action.  He appeared to have a nice stroke within a strictly-defined range of about 14-16 feet (he badly missed anything beyond that), he put up a decent rebounding rate, and while he probably shot too much overall, he really didn't take anything off the table.

Of course, a) he banked in at least two shots where the bank looked just awkward enough that it may have been unintentional, and b) unlike Underwood (blocked shots, rebounding), he didn't really bring anything new to the table.  Both Bowers and Safford have at least his shooting range, and he didn't really get a chance to set himself apart in any way.  If Underwood (or even Moore) is just too much of an offensive liability to see the court, then Stone could become an extremely viable option, but in all, I'm just very eager to see him play against tougher competition -- let's see what he brings to the table in real minutes.

I should clarify something here: while his style was that of Jeffrey Ferguson, he was basically better than Ferguson in just about every category (just like Kim English's style was similar to Derrick Chievous', only much less efficient).  He was a better overall shooter (Ferguson actually had decent range but was extremely inconsistent), turned the ball over a smaller percentage of the time, passed more, and had a much higher Floor% (51% versus 34%).  To be fair, Ferguson was better on the offensive glass (he better be -- he's three inches taller than Stone).

In all, Ferguson's problems at Mizzou (you'll notice the picture above is of him in a Wayne State jersey -- that's where he finished his career after transferring) were similar to what I mentioned above about Stone; while he seemed to have potential in a lot of ways -- decent shooting range, good length, etc. -- he didn't really deliver anything substantial in any one category.  He was rather nondescript (and horribly inconsistent) no matter how unique it seemed he should be.  I won't draw any substantial conclusions from this simply because Stone's sample size is so small, and for all we know, he'll turn out to be a tremendous and scorer and rebounder if/when given the opportunity -- but if he fails to become a major contributor here, the "nondescript" feature is probably why.

(And if he ends up transferring like Ferguson did, then ... BEHOLD THE POWER OF THE DOPPELGANGER STUDY.)

Translation: if John Underwood gets any sort of increase in playing time, his %Fouled rate will almost certainly fall a pretty stark amount, and his entire per-touch splits will change considerably.

Despite that Tyler Stone actually succeeded on the court more than Underwood, for the reasons spelled out above (he brings some specific things to the table that others don't), I am more optimistic about Underwood's future contributions at Mizzou.  For all we know, he might be as much of an offensive non-entity as Steve Moore, but whereas Moore's game has certain aspects of finesse (and infinite amounts of uniqueness) to it, what we've seen from Underwood so far has been more what one would expect to see from a prototypical defense-first big man.  He blocks shots (his 0.33 blocks per possession were higher than even Moore's 0.26, albeit with a much smaller sample size), and he rebounds like mad (his combined Rebound% of 0.27 is MUCH higher than that of any other Tiger).

Also, while the inefficiencies in Moore's game seem based on timidity (on offense, at least), Underwood's were more aggressive, for better or worse.  His Usage% was higher than Moore's, but so was his turnover rate.  He shot more frequently than Moore ... but he missed almost everything he shot.  His game is obviously VERY raw, but if he were to improve and emerge as another type of useful big man for Mizzou next season, then their frontcourt depth could be outstanding.  He did quite a few things well that Mizzou really needed in 2009-10, and if he can improve, there's a spot for him in the rotation.  IF he can improve.  And eat quite a few sandwiches. 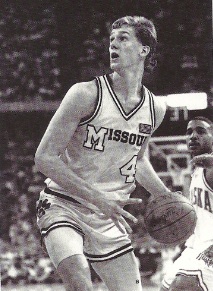 Underwood and Chris Heller had a very different set of expectations when they came to Columbia.  Heller was a former Missouri player of the year, a highly-recruited athlete who chose Mizzou over all nearby schools, including Kansas.  Underwood, meanwhile, was basically unheard of in recruiting circles before nabbing a very late Mizzou offer.  Regardless of how they got to Columbia, they ended up having very similar first-year outings.  Heller was able to steal more minutes (101 to Underwood's 52), and because of that his %Fouled was lower, but their overall percentages and trends were quite similar.  Heller was solid on the offensive glass and great on the defensive glass, better than Underwood from the field (55.2%) and much worse from the line (7-for-22, 31.8%).  Underwood both blocked shots and fouled a bit more frequently.  In all, however, expectations were the biggest difference in their game -- production was similar.

Heller ended up having one of the more unique careers in recent Mizzou history.  He never quite lived up to the expectations set for him -- his best season was his fourth-year junior season (his third year was derailed by a broken foot), in which he averaged 22 MPG, 8 PPG, and 6 RPG.  I bet we would take that from Underwood if he were to get the minutes, especially if he continued to show strong ability on the defensive end.

Like just about every other typical walk-on in the country, Jarrett Sutton took a lot of 3's.  It was what he was on the court to do -- make a 3, send the crowd home happy.  I believe he entered the paint once this season, grabbed an offensive rebound, and had his putback summarily swatted out of bounds ... which was pretty rude if you ask me.

And for fun, here are the eight best walk-on seasons (according to Adj. GS) in the last 20 years: