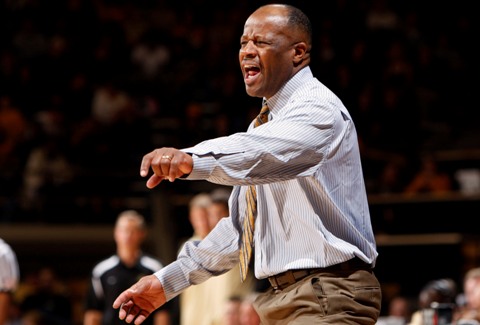 One of my favorite pieces I've written on Rock M was last year's two-part series comparing Mike Anderson to Nolan Richardson after three years (Part One, Part Two).  Most of the conclusions I reached then are still valid now, but I thought it would be interesting to update things for the year that just finished.  Below, we will take a look at each coach's program stats after four seasons and dip our toes into the recruiting waters, just like we did last year.

It bears repeating that Richardson took over a program in much greater health than the one Anderson took over, and he landed a McDonald's All-American (Ron Heury) in his first full recruiting class.  After two years of treading water (it happened for both coaches at both schools), Anderson has gone 54-18 (0.750 win%) the last two years, with four NCAA Tourney wins.  Richardson, meanwhile, managed a slightly lesser record (46-16, 0.742) and only one NCAA Tourney win in Years 3-4.  The health of each program was obvious in both cases, but one can still make a damn strong case that Anderson's program is in better shape moving forward than Richardson's was after four seasons.

In other words, if Anderson wants to keep up with his mentor, he's going to have to kick it up a notch rather quickly.

Let's take a look at how the two coaches' programs filled out the box score in their first four seasons.

I wish Ken Pomeroy's stats went back into the 1980s, as I'm curious how fast Arkansas' 76-possession pace really was.  This was the height of the fast break style that overcame just about all of the Big 8 and SWC at the time -- from 1987 to 1992, Mizzou averaged at least 75 possessions every year (including an absurd 79.2 in 1988-89).  In context, Arkansas' pace might not have been much faster than a lot of teams in that day, but the pressure still made them unique.

In their first four years, Richardson's teams rebounded better, while Anderson's teams controlled the ball better, forcing more turnovers despite fewer possessions and racking up quite a few more assists.

So what about the last two seasons, when each program made its move?

As each team was advancing in the world of college basketball, their differences over Years 3-4 are the same as they were in the Years 1-4 table above -- Arkansas was a much better rebounding team than Missouri has been, but Mizzou has inflicted the Fastest 40 Minutes even more on their opponents, putting together a much better BCI margin and holding opponents to a worse True Shooting percentage.  Anderson has taken the 40 Minutes of Hell and sped them up somehow.

Missouri's offense is a little more based around ball movement than Arkansas' was -- their style seems to have been a little more physical, with both more fouls drawn and more turnovers committed.

In part two of last year's Nolan-vs-Anderson posts, I asked the following question: how much big-time talent would it take for Missouri to establish themselves as a consistently great program like Arkansas was from about 1989 through 1995?  To begin to answer this question, I looked at the number of McDonald's All-Americans Richardson signed at Arkansas -- it was basically the only tool I had to evaluate recruiting at that time, as Rivals.com did not yet exist (nor did any .com for that matter).  I came up with the following table:

The general conclusion was that Richardson basically needed about two top-notch recruits and a whole bunch of athletic role players to succeed at a high level.  He got a jump on Anderson by bringing in Todd Day and Lee Mayberry before his fourth season.  Anderson, meanwhile, seems to have gotten the ball rolling with recruits, though it took until this year for some blue-chippers to come in the door.  Neither Phil Pressey nor Tony Mitchell was named McDonald's All-Americans, but that is not as important now -- Rivals.com has Mitchell listed as a 5-star recruit, which is more or less the same thing as a McD's AA.  Pressey came in pretty high himself.  Whether they are Anderson's Mayberry & Day remains to be seen, of course, but there is no question that things have begun to see an uptick in the recruiting department (and this says nothing of the JUCO All-American visiting Columbia in early-April).  Anderson has already won at a higher level than his sensei ever did with no blue-chippers, but now the blue-chippers are taking notice.

It's ironic that Nolan Richardson was the one who delivered one of this year's classic quotes ("Lots of guys have agents and cousins that want them to go to the NBA. They complain about not getting enough touches.  Mike doesn’t want that. He doesn’t need to go out and sign a bunch of McDonald’s All-Americans. He just needs to go find a few Burger King-type guys and he’ll get it done.") considering Richardson himself never had much success with a roster full of only "Burger King-types."  Even he seems to acknowledge that Anderson doesn't need as much top-flight talent as he did to succeed.

Basically, the whole 'blue chip' debate comes down to one thing: Mike Anderson took Mizzou to 31 wins, a Big 12 tourney title, and the Elite Eight with no players who even resembled blue chip recruits.  If Anderson were to start landing a few, would it hurt the underdog, blue-collar chemistry of the team, or would it launch Missouri into the top tier of college basketball programs?  People have different opinions, and there's no way to prove anybody correct or incorrect, but that's pretty much the center of the debate.

As I've mentioned many times regarding football recruiting, the star ratings and blue-chip concept revolve around margins for error and probabilities for success.  A 5-star recruit has a pretty high probability of success, while each progressive star down has less.  You can succeed with 3-star kids, but can you always succeed with them?  Or do you need the occasional big-time recruit?  Does Mike Anderson have such a great grasp of his Fastest 40 Minutes style that he really simply does not need any blue-chippers?

There's nothing better than succeeding with a bunch of likable underdogs who play with a chip on their shoulder against schools that didn't recruit them.  If Mizzou never lands a 5-star recruit and fields a roster of JUCO transfers and 3-star players with ridiculous athletic ability and unique skill sets, I'll never stop enjoying watching them play, even if they're not quite as good as they were in 2008-09.  (And besides, Mizzou only landed Kim English because they missed out on Travis Releford and/or Scott Suggs.  Recruiting successes aren't always successes, and failures aren't always failures.)  I know that Anderson will squeeze every drop of talent out of every player he's got, and chances are Missouri will be a pretty damn good team no matter what.

But if they did want to go out and land their own Todd Day (man, I was frightened of that guy) or Corliss Williamson, I'd take my chances with them too.

A year later, it does look like Mike Anderson is more than capable of throwing his weight around in the recruiting arena, and after holding steady and making the Round of 32 during what was supposed to be a rebuilding season, he stayed ahead of his mentor in terms of overall program trajectory.  When Nolan Richardson made the Final Four in Year #5 in Arkansas, it was during two All-American recruits' sophomore seasons.  Next year, Mizzou's two highest-rated recruits will only be freshmen; whether Mizzou might have to wait until 2011-12 to expect major, major things, we'll see.  But against one of the more successful coaches of the last 30 years, Anderson is more than holding his own, and it is, to say the least, a very exciting time to be a fan of this Missouri basketball program.