A Plea for Black and Gold Reason

Share All sharing options for: A Plea for Black and Gold Reason

Occasionally, either by recommendation or by chance, I'll be asked to speak to a journalism class. Obviously, this is absurd: I'm two years removed from graduating from the Missouri School of Journalism, so asking me to talk about journalism to people who are learning the craft is like asking the waiter to make them a soufflé. But I still get asked, probably because I'll do it, like I will this Thursday at a high school here in the Dallas area.

Whenever I do one of these classroom talks, I always have one goal: for the love of everything, don't be preachy.

And it's true: nobody wants to be preached at. It's demeaning and insulting and makes you less likely to take away any message, regardless of how valid a point may be.

So know that in the next 1,000 words, I am not trying to preach. I'm observing and offering my thoughts. Any preaching is totally and completely involuntary: I'm no bigger or better than you are. I'm just a guy with thoughts.

And, at the end of this, if you hate everything you read, forget it. Seriously. Remember: I'm the dude who writes absurd stuff about Cornell's mascot. Worth considering. 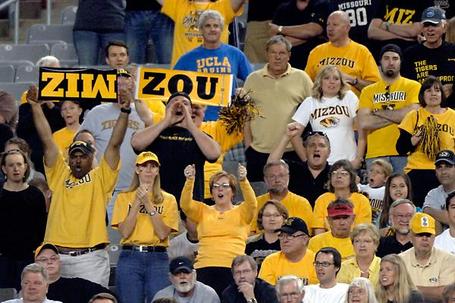 I was kind of late to the Internet party. The first blog I ever frequented was (and remains) Lone Star Ball, the Texas Rangers SB Nation blog. I was ready to jump into the fray headfirst. I had Hot Sports Opinions, to borrow a phrase, and I wanted the world to know.

My first comment ever on the Internet, in response to a post about ESPN baseball writer Rob Neyer criticizing Michael Young's defensive capabilities:

That's Neyer For You

Is it just me, or does Rob Neyer have a problem with the Rangers? Michael Young proved this year that he is the best all-around shortstop in baseball not named Tejada, and STILL no love. I bet he'd take Paul Konerko over Mark Teixeira if given the choice. What a moron.

That was November 2, 2005. As you can read, I was quickly set straight by a pair of LSB's most senior posters for what was and is clearly an unreasonable statement.

I like Michael Young. Always have, always will. My dad, a Rangers season ticket-holder for the better part of two decades, says that he would take Young over any player in baseball.

But my appreciation of Michael Young doesn't make my comment correct, accurate or fair. What it does do is, almost five years later, make me cringe. 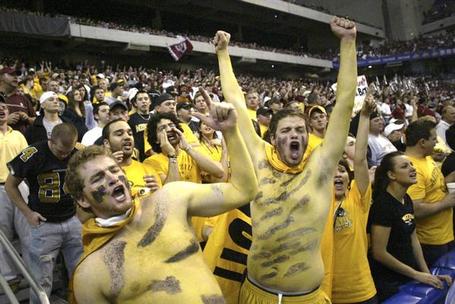 The Internet's power is to not only give people instantaneous satisfaction of their need for information, but also their need to project their thoughts. Think about how you would explain Twitter to someone 20 years ago.

"So, basically, you'll be able to tell everyone in the world anything you want instantaneously, even if you don't think about it?"

It's incredible if you think about it. But like Spiderman said that one time, with great power comes great responsibility.

Which brings me to my point: the Missouri fan base is wasting an incredible opportunity to establish itself as the new garde of sports fans.

I dislike Kansas as much as you do. I own a shirt with an awful lewd phrase about the University of Kansas, right next to my "Kiss Me I'm Irish Catholic" shirt.

And you better believe that I want my fair alma mater to win every competitive event it enters, from football to log-rolling. I live and die with my alma mater: I take what a Dallas-area sports talk radio host has so brilliantly coined as "The Sports Walk" whenever Mizzou takes a tough defeat. I've cried both happy and sad tears over Missouri athletics -- and if you ever want to feel pathetic, try typing that sentence.

But the fact remains that sometimes, Kansas is better than Missouri. Sometimes, Missouri simply is not the better team. Sometimes one of Missouri's players or coaches will make a mistake that costs them a game. It happens. 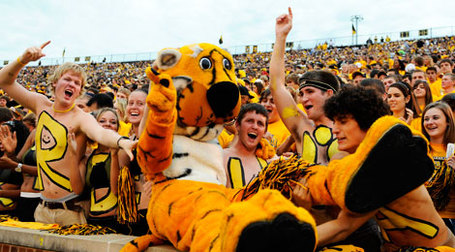 I'm concerned with the reputation that the Missouri fan base is garnering -- one of considerable knee-jerking, entitlement and (sometimes) lack of perspective.

It's blaming the referees for a game Missouri loses by 20 (in any sport). And yes -- something I am extremely guilty of -- it's demanding that Missouri leave the conference for being passed over for a bowl.

We are smarter than that -- we don't have to be subject to ignoring the past or the future in order to demand change for the sake of change.

We're entering a new age of sports, one where a laughable amount of information is available at our fingertips. Yet, in many instances, we refuse to acknowledge that information and stick to our preconceived notions because it's easier.

It's confirmation bias at its best: we believe that a writer hates Missouri, so when he writes something disparaging about Jared Perry's showing at the Combine, we take that as confirmation that yes, indeed, he does hate Missouri. Nevermind the glowing things he's written about Missouri. That's not important.

What's even more bothersome is that we have an opportunity to be leaders. We, as a fan base, have an opportunity to establish a new breed of sports fan. One who doesn't have to kneejerk at Mike Anderson's decision to press when it doesn't work out. One who doesn't have to blame the referees when a call doesn't go Missouri's way (because guess what? They're doing their best, whether you want to admit it or not).

We have an opportunity in our midst to be not a great fan base, but the best fan base. A thoughtful fan base that cheers our teams' successes, mourns our teams' failures, but keeps a grip on perspective (both past and future).

We can be the Best Fans in the Land. And yeah, that would be doubly sweet. 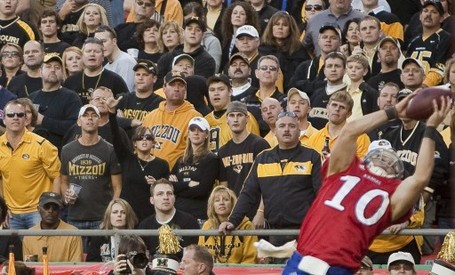 I think it all starts with being thoughtful. It's difficult to do so in the age of the Internet, with its fast-paced, gotta-have-your-opinion-now culture. But with thought comes perspective, and with perspective comes power.

Is firing Gary Pinkel really the best course of action? Would a center really solve Missouri's problems? Is this referee really out to get Missouri? Does Missouri really deserve to win this game?

These are just examples that I've heard over and over. The immediate kneejerk reaction to all of them is "yes." Thoughtfulness could yield different results.

It's difficult -- I know, because I am as guilty as anyone of knee jerking, crying foul and entitlement syndrome. Look at my first comment on the Internet: I mean, that's not bad. That's horrendous.

But I truly believe that Missouri fans have an opportunity to raise the bar for sports fans, through thoughtful discussion and a resistance to what has made the Internet a haven of overreaction. 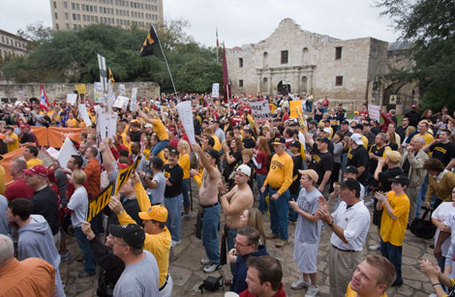 In either a couple days or a couple weeks or a couple months, when (or, I suppose, if) Missouri loses its final game of the basketball season, I'm going to be upset. I'll probably go on a Sports Walk. I might even have a Sports Cry. Because I'm a dork who loves his team.

I may never see Missouri win a national championship in anything; I've accepted that. Heck, Missouri could literally lose every single sporting event it plays for the remainder of its existence -- it could happen.

But my vow is to approach every season, every game, every play, every moment, win or lose, with as much perspective and thoughtfulness as possible. I hope you'll join me.