The Rafters, Class of 2010: Cole Aldrich

Share All sharing options for: The Rafters, Class of 2010: Cole Aldrich 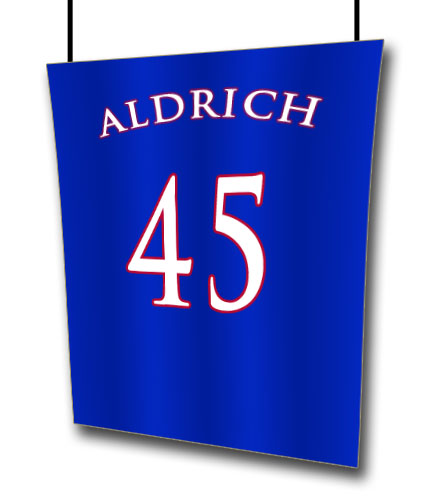 Our third inductee into the Rafters Class of 2010 is bound to be rather controversial one.  Consider it a peace offering, consider it a sign of respect, consider it whatever you want -- it is an admission of reality.  Few opposing teams intimidated, altered, and dominated Mizzou players and teams like the big guy from Minnesota did, and while we are thankful to see him go, there's no question that he earned our respect.

"I’m hoping to go really high," said Cole Aldrich, who said he now is in the market for an agent as he enters the draft with no looking back. "I’ll take the individual workouts (for NBA teams) from here on out until the draft and make sure I put myself in the best position to help whatever team I go to be successful."

Self — he said he has known since last April that Aldrich would be turning pro after three seasons — said it’s "almost irrelevant" where Aldrich is selected.

"We all know he’s going to go pretty high ... whether he goes No. 5 or 14, I think so much of it would be dependent on what other bigs are in the draft," Self said.

"Regardless of where he’s projected, in his particular situation, I think it’s the right move now for him to go ahead and enter. I’d strongly discourage him from coming back. I think he’s paid his dues here, and it’s time for him to move forward into another chapter. He’s made a lot of sacrifices — and his family has — for him to come back (for junior year) in a time where he didn’t have to. We’re all very proud of him."

If you could draw up a Mizzou killer on paper, it would be Cole Aldrich.  He's not the first KU player to dominate Mizzou, but he's the most recent, and he's one of the best.  Because of Aldrich, Mizzou did not safely and confidently take a single shot within about 7 feet of the basket in the last two years, and his demoralizing putbacks and dunks (like the crotch dunk above) sent a message to Mizzou that while their gimmicks might work against other teams, it wasn't going to against KU.  Mizzou did manage to steal a win over KU in Columbia last year, but that was the only one they managed in three years facing the Aldrich-laden Jayhawks.

Look, I realize a lot of readers will probably disagree with this Rafters selection, but it's the right one.  Along with showing affection for Mizzou's greatest players, the Rafters are designed to acknowledge the powerful figures associated with Mizzou basketball, and no recent player has demanded more attention and fear from Mizzou fans (and Rock M readers) than Aldrich.  He deserves to represent past Mizzou killers in The Rafters, alongside Steve Stipanovich, Willie Smith, and the rest of the soon-to-be inductees, for that very reason.  It may be hard to accept, but I have no doubt that it is the right call.

Also, a housekeeping note: as you'll notice by the masthead at the bottom, per KCsince88's impending enrollment at Mizzou, we have added him as an editor at RMN. Everybody welcome our new higher-up!  It seems to have maybe ruffled some feathers among a certain member of the RMN staff, but we'll work through it.