Share All sharing options for: The Wall of Excellence, Class of 2010: Vote #4

In the 1990s, Mizzou took a couple of false starts before finally (and briefly) emerging from the crater created by the late-1980s.  They unveiled a fun-and-gun offense when Bob Stull came to town, and it resulted in yards galore (and two Wall nominees) but few wins.  Stull left, and they brought in Larry Smith for three-yards-and-a-cloud-of-dust and a handful of strong Wall candidates.

Below are your seven 1990s nominees 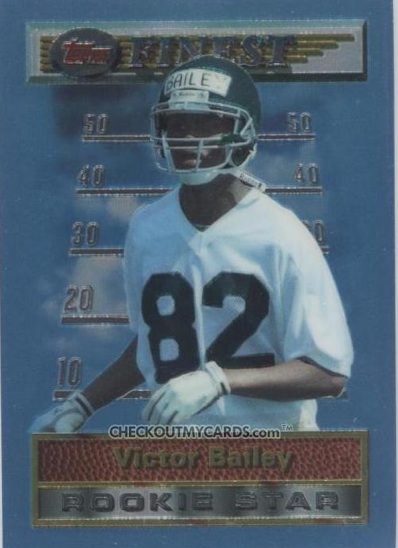 Victor Bailey was to Bob Stull's wide-open offense what Jeremy Maclin was to Gary Pinkel's.  After a decent couple of seasons in 1990-91, in which he put together 53 catches for 934 yards as a sporadic big-play threat for Stull's run-and-shoot, Bailey had a historic 1992 season.  It started with seven catches for 168 yards against Indiana, then 8-for-134 against Marshall.  He then put up 100 yards in four Big 8 games -- 11-for-156 vs Oklahoma State, 8-for-159 vs #8 Nebraska, 10-for-146 vs Oklahoma, and an amazing 12-for-179 in an upset win over #20 Kansas.  Bailey finished his career with 128 catches, 2,144 yards, and 12 touchdowns, and in his last two battles with Kansas, he posted a combined 19 catches and 303 yards.  And he did this with no rushing threat whatsoever to take pressure off of him.  Bailey was drafted by the Philadelphia Eagles, where he had a really strong rookie season. 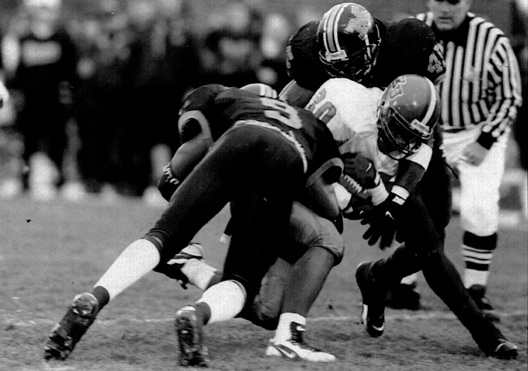 From RMN's Mizzou 25 Bio: When I came to school in '97, Demontie Cross, the 6'4, 210 transfer from St. Louis (via Univ. of Illinois) had already gone from human being to myth.  To listen to the stories, he prevented 150 TDs by himself (hell, the numbers almost back that up) while playing with two separated shoulders, one kneecap, a broken ankle, and both a sports hernia and a regular hernia (whatever the difference is).  He'd crush somebody, somehow drag himself to his feet, then do it again.

How hard did Demontie hit?  Try 9 forced fumbles in his last 22 games as a Tiger.  How well did he tackle?  Not only did he become Mizzou's all-time leading tackler in just three seasons, but he also had 249 solo tackles!  He was the last person standing between opponents and the endzone so often, and his heroic efforts allowed hope for the future to build as young offensive players like Corby Jones and Brock Olivo and Devin West developed.

I talk a lot on RMN about Success Rates and stats like that, but the definitive proof that I don't yet know what I'm talking about when it comes to defensive stats is that I'm pretty sure Demontie Cross wouldn't have scored very well when it came to Success Rates.  If there were a TDs Saved category, however...Cross would be #1 all-time.  And if ever there were a Tiger who deserved more team success than he got, it was Demontie. 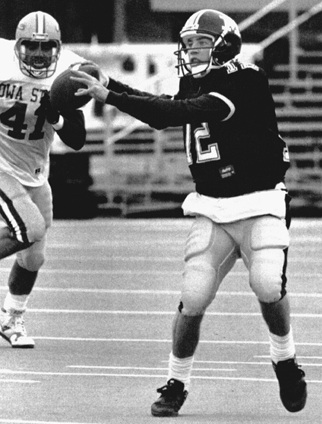 Who was throwing all those passes to Victor Bailey in 1992?  This guy.  With little running game and less defense, Handy tried to lead Mizzou to victory with nothing but his right arm and a couple of speedy receivers.  It didn't work out to well, but that was the fault of talent and circumstance, not Handy.

From RMN's Mizzou 25 Bio: A product of Blue Springs High School, Handy came around about 15 years too early.  If Handy would have had the weapons (and defense) of the current Tigers, he'd have been a household name.  Even with limited resources, though, Handy left school with 25 school passing records. 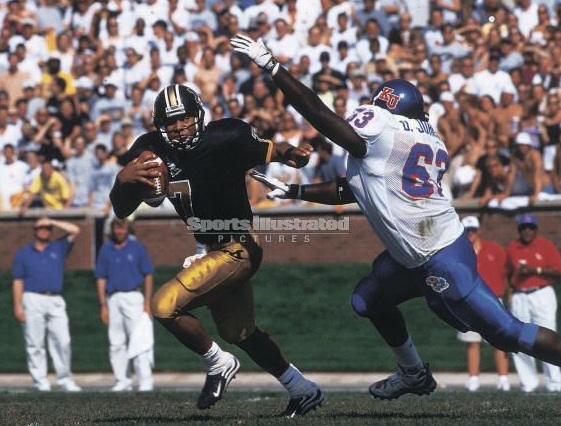 All I have to hear is the word "Corby," and I think of him diving backwards across the endzone against NU in 1997.

And then I think of everything else that happened that evening.  Mixed bag.

Hall of Fame Bio: One of the most dynamic quarterbacks to every play for Mizzou, a true run-pass threat who will always be remembered for leading MU to bowl games (1997 Holiday and 1998 Insight.com) for the first time since 1983 ... Led MU to a 34-31 victory over West Virginia in the 1998 Insight.com Bowl, which marked Mizzou's first bowl win since 1981, as he rushed for three touchdowns and threw for 130 yards in the contest ... Is the only player in school history to rank in the top-10 in rushing, passing, total offense and scoring ... Holds the school career records in points (228) and touchdowns (38), and also ranks 3rd in total offense (6,230 yards), 4th in rushing (2,533), 5th in passing (3,697 yards) and 5th in passing efficiency (119.6 rating) ... Was a legitimate Heisman Trophy candidate entering his senior season, but his statistics were hampered quite a bit due to a lingering toe injury that limited his mobility ... Also played his senior year after the tragic death of his father, Curtis, a Tiger assistant coach who died suddenly of a heart attack prior to the season ... Still earned 2nd-Team All-Big 12 honors as a senior in 1998, despite the injury, as he passed for 1,281 yards and rushed for 536 with a team-high 20 touchdowns (11 rushing, nine passing) ... Was named a 1st-Team All-Big 12 quarterback as a junior in 1997, after setting a school record at the time with 2,545 yards of total offense (1,658 passing, 887 rushing), and adding 26 touchdowns (14 rushing, 12 passing) ... A true scholar-athlete in the finest sense of the term, who was one of 17 people to receive the prestigious National Football Foundation Scholar-Athlete Award in 1998 ... Is also one of only 10 Tigers to earn 1st-Team Academic All-Conference honors three times ... Also was named a GTE District VII Academic All-American as a senior ... Played in the Hula Bowl all-star game following his senior season, and played professionally with Montreal of the CFL and St. Louis in an indoor league before returning to MU to complete his law degree. 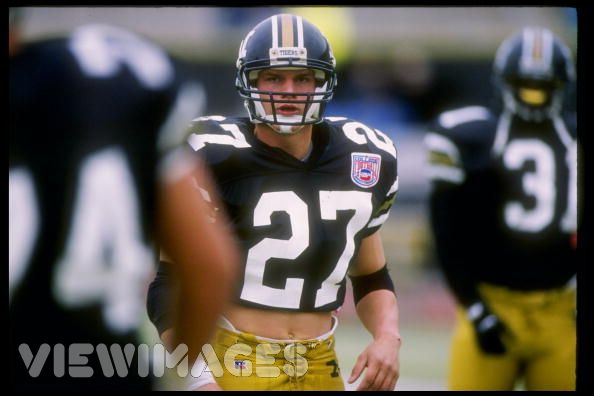 If Olivo wasn't the most hard-working, Justin Smith was.  With less help every year, Godzilla racked 259 tackles in three seasons (as a defensive end!) despite plays being run primarily away from him.  He began his career by starting every game on Mizzou's 8-4 squad in 1998, and he racked up 22.5 sacks, including 11 in his junior year alone (he also had 24 tackles for loss that season).  With little help each progressing year, Smith just got better, ending his career in 2000 as a first-team All-American.  His size-and-speed combination was something to which Aldon Smith needs to aspire on a daily basis.  In his early days, Larry Smith likened him to Junior Seau, and the Cincinnati Bengals basically did the same, drafting him fourth overall in the 2001 draft, the last Mizzou player to be drafted in the top five.