The Wall of Excellence, Class of 2010: Justin Smith

Share All sharing options for: The Wall of Excellence, Class of 2010: Justin Smith 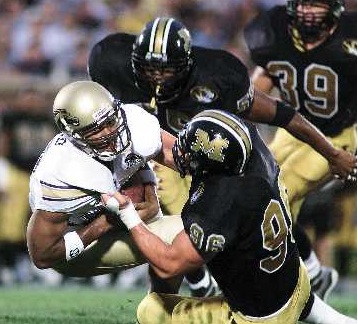 He never really got a chance to prove himself on a national stage, and after a high-profile freshman season playing for an 8-4 team, he toiled in relative anonymity during his final two seasons in black and gold.  That's a shame, because a nation of football fans was deprived of seeing this freakishly athletic, unnaturally intense defensive end do his thing for 34 games in a Tiger uniform.

To say the least, the man they called Godzilla made the most of those 34 games.  With less help every year, he racked up 259 tackles in three seasons (quick reminder: he was a defensive end!) despite plays being run primarily away from him.  He began his career by starting every game on Mizzou's Insight.com Bowl champion, and he racked up 22.5 career sacks, including 11 in his junior year alone (he also had 24 tackles for loss that season).  Smith just seemed to get better with the more attention he got from opposing offenses, ending his career in 2000 as a first-team All-American.  His size-and-speed combination was something to which Aldon Smith needs to aspire on a daily basis.  In his early days, Larry Smith likened him to Junior Seau, and the Cincinnati Bengals basically did the same, drafting him fourth overall in the 2001 draft, the last Mizzou player to be drafted in the top five. 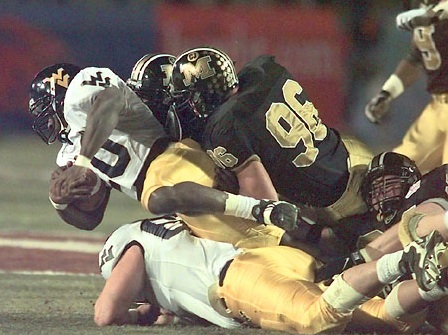 Godzilla's shining moment was, for me, during the Insight.com Bowl, in a play I've described before on RMN.  West Virginia attempted a bit of trickery in the form of a good, old-fashioned Statue of Liberty play.  Quarterback Marc Bulger faked a pass and tried to hand the ball off behind his back to running back Amos Zereoue.  Smith easily got into the backfield (as he did often), then got frozen for an instant by the trickery.  Not knowing who to tackle, he simply shoved Bulger into Zereoue, and they both went down for a loss.

Justin Smith simply never took a play off and used his ridiculous strength to his advantage every second on the field.  He was not blessed with the best team around him, but he never let it affect his intensity.  He is the second defensive player on The Wall, and his stats prove him entirely deserving of such an honor. 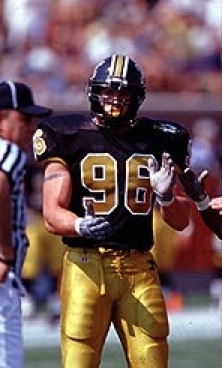