Share All sharing options for: The Rafters, Class of 2010: Kareem Rush 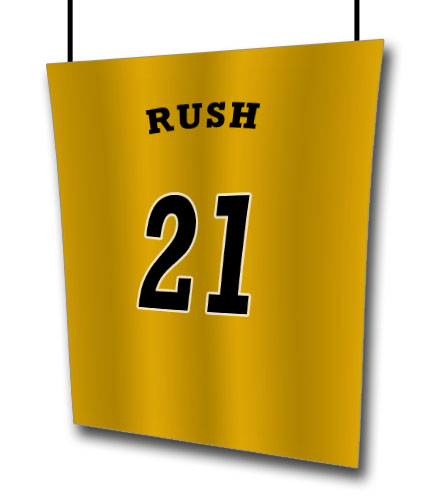 If I were to live another 100 years in Columbia, seeing a century's worth of Mizzou basketball players coming and going for four years at a time, I will never see another jumper as pretty as that of Kareem Rush.  He is the early-'00s Rafters inductee because of his effortless stroke and scoring ability, not to mention his underrated rebounding.  Rush and Clarence Gilbert combined to make one of the most explosive, hot-and-cold scoring combinations in Mizzou history, and Rush's size, shot and athleticism made him a Top 20 pick in the 2002 NBA Draft.  He solidified his status as a Mizzou great by both playing hurt in 2001-02 (he was elbowed in the face in the semifinals of the Guardians Classic and played the finals with a broken nose and mask, then he received 20+ stitches after receiving an elbow to the lip in the first round of the NCAA Tournament but scored 17 in the second round against Ohio State) and helping to lead Mizzou to within one minute of the 2002 Final Four.  Mizzou was volatile and rather inconsistent in Rush's years here, but he left Columbia as one of Mizzou's all-time greats.  And, oh, that sweet jumper ...

Michael Atchison: Perhaps the most elegant offensive performer in Missouri’s history, Kareem Rush, a 6’6" swingman from Kansas City, possessed a picture-perfect left-handed jump shot and an effortless style that made him one of the Big 12’s most dangerous scorers. The league’s Freshman of the Year in 1999-2000, Rush went on a scoring binge in conference play, including a 31-point effort in a win at Texas Tech. The next season, Rush missed half the league slate with a thumb injury that required surgery, but he still earned a spot on the All-Big 12 team, and he garnered national recognition by scoring 29 points against Duke in the second round of the NCAA Tournament despite wearing a specially-made cast on his shooting hand. Then, as a junior, Rush again made the all-conference team and led the Tigers to the Elite Eight of the NCAA Tournament. Rush left school after his junior season for the NBA, but his career scoring average of 18.9 points per game ranks fourth in Missouri history. 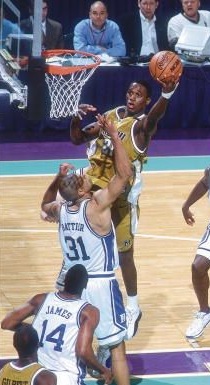