The Rafters, Class of 2010: DeMarre Carroll

Share All sharing options for: The Rafters, Class of 2010: DeMarre Carroll 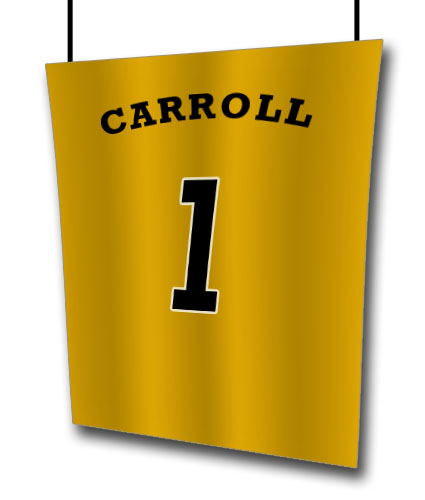 A Vanderbilt transfer who came to Mizzou to play for his uncle Mike, Carroll's Tiger career got off to a shaky start.  He was shot in the ankle outside a Como club and dealt with recurring ankle issues through most of the 2007-08 season.  He still managed to average 12.5 PPG and 6.6 RPG during a disappointing 16-16 season, and with a clean bill of health in 2008-09, he was the face of Mizzou's resurgence.

Heading into 2008-09, Mizzou had failed to make the last five NCAA tournaments; they had not gone that long between tournaments since 1975.  Fan interest was dwindling, apathy was building, and people were starting to wonder if Mike Anderson was the best man for the job.  Carroll led the way for Mizzou's resurgence, averaging 17 points, 7 rebounds, 2 assists, 2 steals and a block for a team that not only made the NCAA Tournament, but blazed all the way to the Elite Eight.  From the 29 & 11 he posted against USC, to the 25 & 9 he posted twice against Baylor, to the "AAAAHHHHHHHHH!" in the intro video, to his handing the ball to Kim English at the end of the Memphis game, he absolutely, positively owned the 2008-09 season and made his mark on Mizzou lore in a way few have been able to do.