In the tradition of Stuff White People Like (which was later brilliantly parodied by Every Day Should Be Saturday), I'm going to intermittently kill time this offseason by examining Stuff Mizzou People Like. Today's edition:

If there's one infallible fact of life, it's that fans are always right. They always would make perfect coaching decisions, bring in the best recruits, play the right players, and win multiple national championships. Mizzou People are no different. 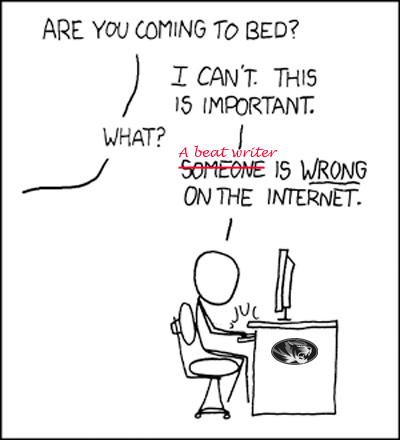 That's why Mizzou People know that Columbia Tribune beat writers are TOTALLY in the coaches' pockets and why Mizzou People use every available opportunity to remind the reporters just how wrong both they and the coaches are almost every single day. Gary Pinkel's staunch resistance to implementing a fullback is likely a direct result of profound conversations had with reporter/BFF Dave Matter during their three-day-a-week scotch and porterhouse dinners. Mike Anderson isn't going to recruit a 7-foot, immobile rebounding machine because reporter Steve Walentik and the coach have a super secret special handshake. Mizzou People are totally on top of calling out these egregious violations.

And why just criticize coaches when you can totally rip on reporters themselves?!? Mizzou People know how to totally win the internet. Dave Matter mentions in passing that he likes Bruce Springsteen and the St. Louis Cardinals? Mizzou People will TOTALLY let him know he's stealing paychecks (/high five selves). Steve Walentik puts Mizzou below Kansas in his Big 12 Power Poll? Mizzou People better register on The Trib's Web site to let him know he's some kind of communist who is totally ignoring the facts (/quits job to join Peace Corps until realizing it jeopardizes Clinton Club access). An assistant coach gets a raise commensurate with others in his job market? Better yell at the beat reporter for the disintegration of proper values in American society as education takes a backseat to athletics. Dave and Steve, damn you for letting a self-sufficient athletic department operate in the established free market of college athletics while the [insert course of study] department struggles! (/use boosted self-esteem to make furious passes at married women).

Mizzou reporters are given a tremendous amount of access in comparison to many programs around the country. That's why it's Mizzou People's job to make sure the beat writers know how much they regurgitate reports and bombard us with all the information we don't really need or crave. It's the same report every time, Dave! Kansas and Kansas State fans are lucky to receive practically no practice details. Thank God they don't have to deal with the minutia of information like Mizzou People do. Other fan bases don't know what a burden it is to be Mizzou People, and they know this because Mizzou People remind everyone they've ever met that they've had season tickets since 1977, so clearly their opinions have more intrinsic value.

THE LIST:
No. 1 - Comparing everyone to Clarence Gilbert
No. 2 - Bitching at Columbia Tribune beat writers