If you are following me on Twitter (and if you're not ... why not??), you will see that I began a Top 100 College Football Teams of All-Time list based on an Estimated S&P+ measure I finalized this weekend.  (For more on the principles of S&P+, you can go here.)  It is 99% based on simply what the numbers spit out to me, though I did have to make some adjustments based on the presence of certain mid-major teams that killed all opposition in their path without actually playing anybody even remotely competitive (1973 Miami-OH, you were lucky to make the cut).  Anyway, I did my best to normalize data across eras -- if you think college football is like an oligarchy now (where the haves rule over the have-nots), this is child's play compared to 60-80 years ago -- and I thought the list would be an interesting conversation starter.

I realized last night, however, that the same rankings could start another conversation here.  If I have rankings for all teams since 1920, that means I have rankings for all Missouri teams since 1920.  And as we continue to trudge through the late-spring before we get to our 2010 football preview weeks, how about we countdown from the worst Mizzou teams to the best ones?  Without further ado, let's get started.  We have to suffer through quite a few pathetic lemons before we get to the lemonade, of course. 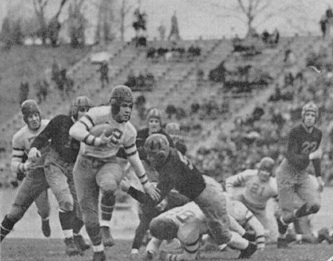 Gwinn Henry had led Mizzou to quite a few strong seasons in the 1920s, but the Tigers went just 4-13-2 in his final two years on the sidelines.  He was dismissed after the 1931 season, and the boosters overruled athletic director Chester Brewer's preferences on who his replacement would be.  They preferred the man Mizzou would end up hiring: Frank Carideo, Notre Dame's star quarterback from the 1929-30 seasons.

Doing the math, of course, you find that Carideo was just 24 when the 1932 season started, and he quickly proved that he was not ready for a major head coaching job.  He couldn't work with talent that wasn't at the caliber of Notre Dame's, and his three seasons in Columbia were three of the worst in the history of the program.  1932 was bad (we'll get to that one soon enough), 1933 was terrible, and 1934 was simply the worst season in the history of the program.

The 1934 Tigers scored a staggering 25 points all season long, 13 of which came in potentially the most embarrassing loss of the season, to Wash. U.  They were outscored 106-6 by their Big 6 rivals.  106-6!  Clearly offenses weren't high-scoring in the mid-1930s, so giving up 106 was actually more egregious than scoring just six.

Of the 126 teams that constituted what would have been considered "Division I" in 1934, Mizzou ranked 100th in offense, 118th in defense.  We talk about how bad a program Kansas State was when Bill Snyder took over ... well, when Don Faurot took over in 1935, Mizzou was as bad or worse.

The lesson, as always: never listen to boosters.

(The secondary lesson: football never changes.  The spread is basically the Split-T with more receivers, and boosters were screwing things up 75+ years ago.) 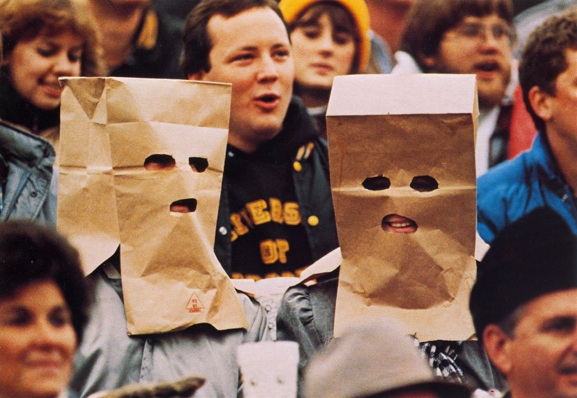 We've already discussed this one in great detail (Part One, Part Two, Part Three).  Mizzou was basically nine points away from a 7-4 record in 1984, but a series of tight losses (and a tie) led to Warren Powers being ousted as Missouri's head coach.  Enter Woody Widenhofer, a gregarious, charismatic, experienced football coach ... who promptly ran Mizzou into the ground.  The Widenhofer era started with a loss to a putrid Northwestern team and really never got better.  Mizzou lost tight games to bad teams (Northwestern, Cal, Kansas State ... all at home) and got their doors blown off by Oklahoma, and even though they were constantly putting up a pretty good fight, they just had no idea how to make plays when they needed to.  I actually expected Carideo's three squads to end up #88-90, but the 1985 team was just special enough to trump two of the three Carideo years. 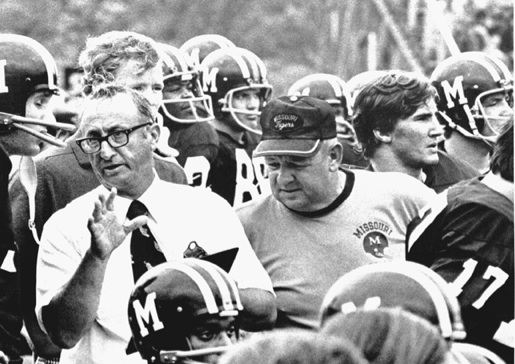 According to my Estimated S&P+ figure, Mizzou's defense ranked second in the country in 1969.  In Dan Devine's last season on the Faurot Field sidelines, it fell to 42nd.  In 1971, Mizzou's first season under longtime Devine assistant Al Onofrio, a supposed defensive mastermind, the defense ranked 112th.  Coupled with an inept offense and a crippling schedule (seven of Mizzou's 11 opponents finished with winning records, including 13-0 Nebraska, 11-1 Oklahoma, 10-2 Colorado and 9-3 Stanford), this team never had a chance.  Like they did in Widenhofer's first season, the team often put up a decent fight, but they were simply outmanned, both on the field and on the sideline.  They finished the season with a pathetic 7-2 loss to a 4-7 Kansas squad and finished with just 93 points scored for the season.  Ouch.

Here comes Carideo's second (and second-worst) team.  Hoping to build on 1932's awful 1-7-1 showing, Mizzou outscored Central Methodist, 31-0, to start the season ... and was outscored 193-27 the rest of the way.  They were again mauled by the rest of the Big 6, getting outscored 119-7 (that's right, in Carideo's final two seasons, Mizzou was 0-10 in the Big 6, getting outscored 225-13), and the only thing preventing the 1933 team from taking the #90 spot on this list is the fact that their strength of schedule was done favors by Nebraska's and Kansas State's success that year ... and the fact that they actually won a game.  I personally would have put this team at #89, but the numbers tell a slightly different tale. 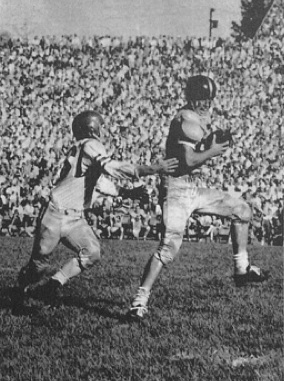 Though the 1932 team gets the highest rating, to me this was easily the best one-win team in Mizzou history (and yes, I know that sounds terrible).  They were only outscored by 10 points per game (really, it's hard to go 1-9 while being outscored that little), went 0-6 in games decided by seven points or less, lost by just one point to Maryland (who finished the season #3 in the country) and beat a 6-4 Colorado team ... but they ran out of gas down the stretch.  After a 20-0 loss to eventual national champion Oklahoma, Mizzou was whipped by a combined 34-7 by Kansas and Kansas State.

The 1955 did have one thing going for them: Hank Burnine.  In an All-American campaign, the receiver led the country with an astounding (for the day) 44 catches and 594 yards.  Of course, as we see, the primary reason Mizzou was throwing so much was that they were always behind (making Burnine the Justin Gage of his day), but that's neither here nor there.  Burnine was a talent, and this team came very close to being much better ... but they weren't.