As we finish with the bottom twenty, we get another batch of teams that played in my lifetime ... and of course one more blast from the 1930s.

Heading into 1991, Mizzou fans desperate for a reason to be optimistic could find it in the fact that the Tigers had been just two or three plays away from bowl contention in 1990.  Everybody remembers the Fifth Down play, of course, but Mizzou had also lost by one to TCU and by two to Iowa State.  Combined with the Colorado "loss," that was three losses by a total of five points in a 4-7 season.  They were close.

After 1991, they were less close.  A respectable 2-1-1 start was encouraging, but then Mizzou lost 55-7 to Colorado.  And after a romp over a terrible OSU team (my first game ever at Faurot Field!), 63-6 to Nebraska.  And after a one-point loss to Iowa State, 56-16 to Oklahoma, 32-0 to Kansas State, and 53-29 to Kansas.  They were still just three points away from 5-6, but by getting blown out by every decent team on the Big 8 schedule, Mizzou appeared to take quite a step backwards in 1991.  Bowl contention was no closer than it had been in 1990 or 1987, and the future wasn't looking particularly bright either.

Here is where I remind everybody of who was on Bob Stull's strangely fantastic coaching staff in the early-1990s (from a 2006 Trib article):

The most remarkable upshot of the Stull era might be the prodigious coaching careers that emerged from his staff. The Stull coaching tree - it’s more like a branch off the Don James sequoia - never came to blossom at Missouri. But it produced some impressive legacies.

With all that coaching talent in Columbia, how could the Tigers have failed so miserably?

After miserable campaigns again in 1991 and 1992, there was enough returning talent to maybe once again hope for six wins, especially considering Mizzou finished the 1992 season hot, beating both Kansas State and Kansas.  They whipped an Illinois team led by Simeon Rice and Kevin Hardy, 31-3, in the season opener, and optimism began to grow pretty strong.

And then Mizzou went to College Station.  The 73-0 loss that followed -- in which R.C. Slocum was doing whatever he possibly could not to score more points -- effectively marked the end of the Bob Stull era.  Mizzou would go on to thump Oklahoma State (I was there again!) and squeak by a 3-win Iowa State team, but there was just no hope.  They could only manage a tie against a terrible SMU squad, and they once again got rolled by any team with a pulse.  The Stull era ended with a sad 28-0 loss at the hands of Kansas in Lawrence, and the Larry Smith era would begin soon after.

Compared to other coaches' first seasons (Frank Carideo, Al Onofrio, Woody Widenhofer), Gary Pinkel's wasn't too shabby.  A tenure-opening loss to Urban Meyer's first Bowling Green team wasn't the best place to start (granted, that loss doesn't look quite as bad now that we know what Meyer became), but Mizzou would actually manage an encouraging three wins in conference play, as many as the previous two years combined.  They won twice on the road -- coming from behind to beat Kansas in Lawrence and knocking off Oklahoma State in an exciting double-OT game -- and stomped Baylor, and they actually carried meager hopes for bowl eligibility as late as the tenth game of the season despite, among other things, the famous Eric Crouch Run.  Of course, a mediocre Kansas State team handled them easily (24-3), and with nothing to play for, Mizzou finished the season by laying a major egg in East Lansing against Charles Rogers and Michigan State (55-7).  Getting outscored 79-10 in the season's final two games was not the best way to lend optimism to the future, but this team was at the very least an improvement over the brutal 2000 squad that ranked 80th on this list. 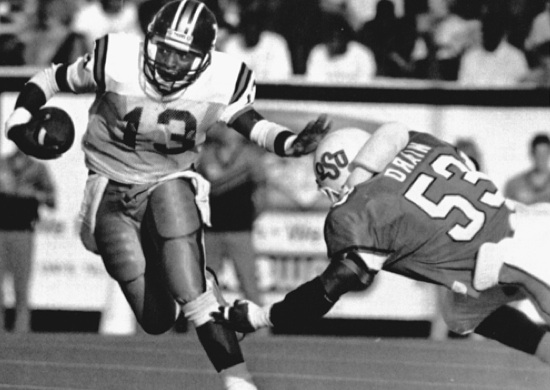 Heading into 1988, Mizzou really hadn't been terrible all that long.  They were a good-but-unlucky team in 1983, and the Warren Powers era had ended with a series of tough losses in 1984.  They were obviously horrific in 1985, but they had improved to three wins in 1986 and five in 1987.  There was at least a bit of hope that the small drought might be over, and Mizzou might be ready to play respectable football again.  But as with Bob Stull's final team in 1993, a brief bout of encouragement was followed by an extended drought of mediocrity.  Mizzou beat Utah State in the season opener, got thumped by a good Houston team, and managed a tie against what would be a strong Indiana squad ... but they couldn't hold on for too much longer.  They got romped by one of the best Miami teams on record, killed the famous 0-11 Kansas State team ... and then lost five in a row.  Some games were close (Nebraska 26, Mizzou 18) and some were not (Colorado 45, Mizzou 8), but it was clear by the end of 1988 that Mizzou was not going to be able to put the pieces of Woody's Wagon together, and it was time to move on to a new coach.

A countdown post wouldn't be complete without at least one return to the 1930s, right?  Don Faurot's first two teams had managed to overachieve (they were 9-5-4 in 1935-36) while putting the pieces of the program back together, but before they could take a major step forward with Paul Christman behind center, they took a small step back in 1937.  This was a competitive, stingy team that gave up just 6.4 points per game ... and scored just 4.2.  They pitched three shutouts, but were shutout themselves five times.  They played five teams with winning records (6-1 Colorado, 8-2 Michigan State, 6-1-2 Nebraska, 7-2-1 SLU and 5-2-2 Oklahoma) and were outscored 44-13 (average score: 9-3), a respectable if mostly unimpressive showing.  Mizzou would win 36 games over the coming five seasons, but 1937 was a year of youth and stagnation.