What If...Mizzou had already joined the Big Ten (Reintroduction & 2003)

Share All sharing options for: What If...Mizzou had already joined the Big Ten (Reintroduction & 2003)

I think they call this synergy.  Back in December, I wrote a What If...Mizzou had joined the Big Ten series that can be found here:

Between basketball writing and other distractions, the series pretty much ended there.  (I know ... I'm a tease.  I know you were just DYING to see how 2003 would turn out in alternate reality.)  But with ever-renewed Big Ten talk both distracting us through the long offseason and keeping Rock M's hits up a bit (April was somehow our third-best month ever), it might be a fun time to pick up the series again ... with a twist.

Since it is really beginning to sound as if a Big Ten that contains Missouri won't only have 12 teams, let's have some fun.  For this version of alternate reality, we are going to pretend that the Big Ten expanded to 16 teams starting with the 2003 season.  This will allow us to explore the scheduling possibilities of that scenario while renewing my own interest in this series.  Everybody wins!  Today we'll lay out the new scenario and plow through the 2003 season, tomorrow we'll move to 2004 and beyond.

Alright, so here's the (fake) scenario I'll set up: with the Big Ten, Big 12 and SEC all quite successful in the 12-team format, the ACC looks to move toward a championship game format (they did so for real in 2005), and since a) they want to stay ahead of the curve, and b) the Big East is being raided anyway, the Big Ten moves straight to 16 teams by adding Nebraska, Rutgers, Pittsburgh and Syracuse, forming the Big Ten Network a little earlier than it did in real life.  The Big East implodes, and the Big 12 takes a huge hit as well.  This likely sets off the domino effect we have envisioned already -- Texas and A&M to the Pac-10+, the SEC potentially raiding a southern portion of the ACC (which could potentially force the ACC to raid even more of the Big East), etc.  Obviously this isn't tremendously realistic, but ... that's not exactly the point, is it?

(I'll pause for a moment while you imagine how this would have affected the 2005 season, when Texas and USC would have played ... in early December for the Pac-14 title.)

So the divisions are laid out as Ross and I laid them out the other night:

To lay out the schedules, we will utilize what I discussed a couple of weeks ago in my How would a 14- or 16-team Big Ten work? post.

The most seemingly easy way to draw up schedules for a 16-team league would be as follows: each team plays its seven division rivals, plus two non-division rivals for a nine-game conference slate.  You play everybody in the opposite division twice in eight years.

To show how this would play out, let's play a game of Pretend: let's say that to get to 16 teams, the Big Ten adds the teams Kevin Harlan suggested recently (only, subbing in Nebraska for Notre Dame, since ND is very unpredictable right now).  So Pitt, Rutgers, UConn, Nebraska and Mizzou join the Big Ten/16.  Now, keep in mind for all of this, I'm not aiming for accuracy by naming those five.  Substitute in Notre Dame, Syracuse, Louisville, Iowa State, Kansas, Maryland, or any number of teams; I chose this because it was the best mix of interesting and semi-realistic.

With those five teams added to the fray, I think you end up with the following divisions:

Anyway, if those were the divisions, here is what an eight-year breakout of nine-game schedules would look like for Missouri:

(First of all, it goes without saying that with a nine-game conference slate, Missouri isn't playing ANYBODY of note in non-conference play, especially assuming they're also playing Kansas.  The other two non-con games would almost certainly be of the McNeese State and Miami-OH variety every year ... and it would be hard to complain too much about that.  But that's neither here nor there.)

Replace UConn in that scenario with Syracuse in the new one, and we're set.  I do think the 4-team pods are a legitimate possibility (it would work wonderfully in basketball, where you would play all 15 teams once, and your three division rivals twice, for a perfect 18-game schedule), but for now we'll go with the simple, 8-team divisions.

One adjustment: because the fake 2002 schedule from the last What If post had quite a few scheduling similarities with the Year 1 scenario above (Illinois, Wisconsin, at Indiana, at Purdue, at Michigan State), we'll flip the even-numbered years with the odd-numbered years, meaning 2003 will feature the Year 2 schedule, 2004 the Year 1, 2005 the year 4, 2006 the year 3, etc.

(This wasn't the intention, but this does mean that Mizzou gets to host Nebraska in 2003 ... which is awesome.)

The 2003 season was a pretty great place for the Big 16 to start.  This was not a particularly great time for the SEC (at least, not compared to today), and the Big Ten would have been rather monstrous.

(Mizzou wasn't really ranked in the 2003 preseason, but after an 8-win 2002 in alternate reality and a sophomore Brad Smith, I say they'd have been at least 25th.)

Obviously one of the complaints about an East-West split is that the East would be a lot tougher than the West, and in this case, that appears to be correct.  However, the West still has three teams ranked, plus Iowa was just coming off of a dream season, and Nebraska was just two years removed from the national title game.  The East would have been more top-heavy, but in all I think this would have been a really nice split in 2003.

In all, a pretty rough slate.  Mizzou opens at Arrowhead against Kansas, then gets their chance at the West title with a rough Wisconsin-Nebraska-Iowa-Purdue-Michigan slate in the middle of conference play.

This one happened, albeit in Lawrence.  Mizzou is coming off of an 8-5 season in Brad Smith's freshman season, and expectations are sky-high ... and Kansas unloads on them.  It's closer at Arrowhead than it was in Lawrence, but only barely.  This is an absolutely brutal stomach punch to start the season.

This one happened.  So you've lost to Kansas, you've looked average-at-best against Eastern Illinois, and now you find yourself down 14 in the fourth quarter against Middle Tennessee.  It's only mid-September, and the season is about to fall apart.  Then Brad Smith becomes Brad Smith for the first time in 2003, and Mizzou pulls the game out in overtime.  It's a relief, but with only three non-conference games, Mizzou now has to hit the conference schedule with plenty of question marks.

Marion Barber III and Laurence Maroney visit Columbia for some serious offensive fireworks ... if Mizzou can hold up its end of the bargain.  (This would be particularly interesting because of Maroney, who, as we've discussed previously, seemed to have Mizzou at the top of his list before dragging the process along into January, when Mizzou had to move on and snagged a commit from Marcus Woods instead.)  Anyway, this one lives up to its billing.  Smith, Zack Abron, Barber and Maroney all go nuts, and Mizzou holds on for dear life at home.  We'll say James Kinney comes up with a huge fourth-quarter sack after an Abron touchdown gave Mizzou the lead once and for all. 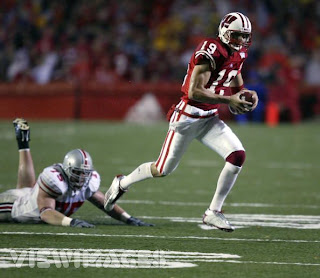 Back to reality for the Mizzou offense.  Jim Sorgi and the Badgers offense does not produce a lot, but the tough, physical Wisconsin defense hems #16 in just like Kansas did, and Mizzou's now 3-2, 1-1 in conference.

Yeah, uh, you probably don't need a reminder that this one happened.  Nebraska is on an early roll and takes a 10-point lead into the fourth quarter, when Mizzou explodes for 27 points and gets their first win over NU in 25 years.  They hadn't played NU for a while, so that would take 1% away from the moment, but this would have still been fun as hell.

After the big win over Nebraska, Mizzou hosts an improving Rutgers squad, led in part by redshirt freshman fullback Brian Leonard.  The Mizzou defense shows some holes, and Rutgers is able to play keep-away for a while, but eventually Mizzou pulls away on Homecoming.

It's the last weekend in October, and Mizzou looks like they're on a roll.  They're now 5-2, 3-1 in conference, and ranked around #18 or so, and an upset win over Iowa would put them in the driver's seat for the Western Division title.  Unfortunately, this is one of the meaner Iowa D's of all-time, and with both Bob Sanders and Chad Greenway roaming the field, they are pretty much custom-built to shut down Brad Smith and Mizzou.  This one isn't close.

Mizzou returns home hoping to clinch a bowl bid even if their West title hopes are all but dead.  They host Kyle Orton, Taylor Subblefield, John Standeford, and the big-time Purdue offense.  The Boilers were a little better than you probably remember in 2003, and we'll say they score two late touchdowns to pull off a devastating win at Faurot Field.  Mizzou was ranked and look

So now Mizzou's 5-4 and reeling, and they have to face their fourth ranked opponent in five games.  A trip to the Big House is pretty ill-timed here, and Braylon Edwards, John Navarre and the Michigan offense is far too much for Mizzou to handle.  It's close in the first half, but the Wolverines pull away in the fourth quarter.

That's the memorable Graeme McFarland pictured above.  Mizzou has lost three games in a row and is still needing a win to lock up a bowl bid, but on Senior Day, Zack Abron, James Kinney and the other seniors have more than enough to get the job done and send Mizzou bowling for the second straight season.

This one really happened, albeit at The Ed.  Mizzou has to go to Champaign now for this one, which makes it closer ... but not close enough.  Mizzou is sloppy, and Illinois is desperate (they're 1-10, 0-8 in conference at this point), and it stays close until the very end, when a Brad Smith touchdown finally gives Mizzou the lead and puts the game away.  A win is a win, but ... bleh.

So Mizzou finishes 7-5, 5-4 in conference, with tight wins over Illinois and Minnesota and disappointing losses to Kansas, Wisconsin, Iowa, Purdue and Michigan.  (This Big 16 is pretty brutal!)  How do the standings look?  Surprising, to say the least.

A 27-13 win over Iowa gives Purdue a surprising West title, while Mizzou's 41-24 win over Nebraska prevents the division title from going to Lincoln.  In the East, Michigan State rides a rather favorable schedule (only one tough road game, which is an upset win over Ohio State) to a shocking 8-1 record, but their 27-20 home loss to Michigan prevents them from winning the East.  We get a Michigan-Purdue title game, and ...

Michigan wins big, though they can't really move up in the polls because Oklahoma, USC and LSU all still have one loss.  (Who the hell knows how the new-fangled Big 12 plays out, but we'll say that Oklahoma still loses to Kansas State int he title game.)

With a dissolved Big East, the Big Ten now has ten bowl ties, and they fill all of them.

Mizzou gets sent to San Francisco (a little further away than Shreveport), and it's a shootout between Brad Smith and Bradlee Van Pelt.  Mizzou gets revenge for the 1997 Holiday Bowl (okay, not really, as Mizzou doesn't go to the Holiday Bowl in Alternate 1997), but a really fun, come-from-behind bowl win ends an 8-5 season that matches Mizzou's actual 2003 achievement.