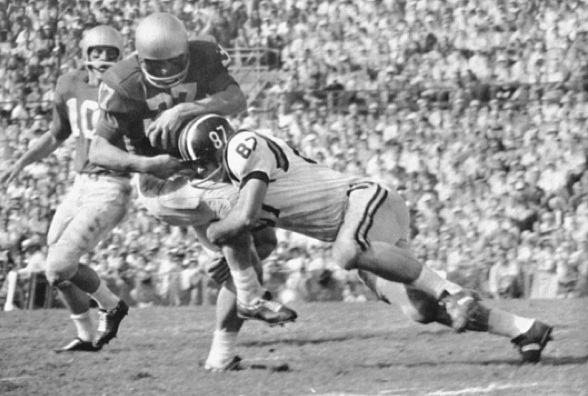 Heading into the 1959 season, Mizzou had posted records of 4-5-1, 5-4-1 and 5-4-1 in the previous three seasons.  Dan Devine's second team wouldn't really improve on the record, but, to say the least, the overall level of accomplishment was a lot higher for this squad.

After a respectable 19-8 loss to what would prove to be a very good Penn State team, Mizzou asserted itself in a trip to the Big House.  While Michigan would turn out to be average that season, Mizzou's 20-15 win over the Wolverines was a huge statement. As mentioned many times, Don Faurot often scheduled road trips to big-time programs, usually from the Big Ten, because of the big payoffs.  It's a good thing they got good money for those trips because they almost never won them.  Beating Michigan had to feel great for restless Mizzou fans.  When the Tigers followed up on the victory by beating Iowa State in Ames, all the better.

Of course, unlike in recent seasons, when Mizzou started weak and got hot in October, the opposite happened this time around.  An encouraging 2-1 start was undone by a bad 23-2 loss to a mediocre SMU team, then a 23-0 home loss to Oklahoma.  This was a "no repeat" year for Oklahoma, meaning they weren't eligible to go to the Orange Bowl, and Mizzou was blowing a great opportunity to steal the trip to Miami that went to Big 8 runners-up in odd-numbered years.

A 9-0 win over slumping Nebraska only slowed the tide; Mizzou turned around and lost by 1 at Colorado, falling to 3-4 and 2-2 in conference. But nobody (not even OU, who lost to Nebraska) was asserting themselves in the conference, and after a tough 13-0 win over Air Force, Mizzou decided to fill the void.  A 26-0 win over Kansas State gave them a major opportunity -- beat Kansas and, coupled with an Iowa State loss to Oklahoma, Mizzou was going to Miami.

For once, OU actually did Mizzou a favor -- they romped over ISU, opening the door for the Tigers ... and after a super-tough 13-9 win in Lawrence, Mizzou had officially clinched their first Orange Bowl since 1939.  And against #5 Georgia, Mizzou quickly proved they weren't happy just to be there.  Mizzou harassed Georgia QB Fran Tarkenton all game long, getting to him often, and Mizzou QB Phil Snowden actually outplayed him for the game.  Unfortunately, Tarkenton eluded the rush for two big passes -- both touchdowns -- while three Mizzou trips deep into UGa territory came up with no points.  Mizzou outgained Georgia, but the Bulldogs won, 14-0.  Mizzou finished the season just 6-5, but they had laid the groundwork for a 1960 team that would return almost every key contributor.

More on this team here, here and here.

We're going to be seeing a whole lot of the 1960s from here on out.  Mizzou's 1966 team was, like that of 1961 and 1970, one of transition.  Mizzou had to replace a ton of talent -- guys like Johnny Roland -- and was expected to take a tumble.  Their scoring would fall from 20.2 PPG to 12.1, but a defense led by newcomers like Roger Wehrli would make sure that Mizzou stayed in games.

Of course, things started rather swimmingly.  Mizzou thumped a rebuilding Minnesota team, 24-0, then took out Illinois on the road.  A tough 24-15 road loss at #2 UCLA followed, but Mizzou quickly moved to 4-1 with wins over Kansas State and Oklahoma State.  And then the offense fell apart.  Mizzou could only tie Iowa State, 10-10, then was shut out in epic back-to-back losses to Nebraska (35-0) and Colorado (26-0).  Any goals for a conference title had long since been undone, and Mizzou had to rally for nothing more than pride and a possible bowl bid.  They did just that.  Kicker Bill Bates uncorked a 52-yard field goal to win at OU (sigh, Mizzou's last win in Norman), and a 7-0 win over Kansas gave Mizzou a still-respectable 6-3-1 season.  Mizzou gave up 61 points in two weeks against NU and CU ... and 55 points in the other eight games.  The momentum they built at the end of the season would carry over to successful 1967-69 campaigns.

We most likely all remember this one.  It's impossible to overstate how important this season was for Gary Pinkel and the Mizzou football program.  Mizzou's epic collapse in 2004, featuring multiple painful blown leads and a 5-game losing streak, gave a large portion of Mizzou fans all the ammo they needed to give up on Gary Pinkel; the death of Aaron O'Neal in July only increased the negativity surrounding the program.  Mizzou was unveiling their own version of the spread offense, but the defense still struggled.  Hank Baskett burned the Tiger defense for approximately 742 receiving yards in a New Mexico upset over Mizzou in the second game of the season, then Vince Young and the epic Texas team of 2005 put up 51 points two games later.  Mizzou was 2-2, and the offense wasn't good enough to compensate for the defense.

Then Mizzou posted one of their most vital 3-game win streaks in their history.  Brad Smith ran wild in a win over Oklahoma State in Stillwater (one of my favorite road trips with lionsden and my buddy Jeffrey), but he was completely shut down by Iowa State in Columbia.  Mizzou scored 14 early points against the Cyclones, but ISU surged to a 24-14 fourth-quarter lead.  Smith was knocked out of the game by a cheap shot ... and Mizzou probably wouldn't have won without it -- cocky freshman Chase Daniel came in and engineered two late scoring drives to send the game to overtime.  After ISU missed a field goal, Adam Crossett booted three points through the uprights, then raced to the 25-yard line in tribute to Aaron O'Neal.  It was a wonderful moment, and after Smith got his mojo back against Nebraska the next week, running wild in a 41-24 win, it looked like things had begun to turn around.

Then Mizzou scored a combined 15 points against Kansas and Colorado, falling to 5-4.  After a win over Baylor clinched bowl eligibility, Mizzou traveled to Manhattan, blew another late lead to K-State, and lost in Bill Snyder's first last game, 36-28.  Thanks to Daniel's late comeback against Iowa State, Mizzou was bowl eligible, but with a second Shreveport trip in three seasons on the horizon, fan enthusiasm could not have been lower.

Then the Independence Bowl comeback happened.

I don't want to jump too far into hyperbole, but that quite possibly saved Gary Pinkel's program.  For the season, Mizzou scored 31 PPG ... and allowed 29.  There were almost as many setbacks as steps forward, but the Independence Bowl gave the program a desperately-needed shot in the arm. 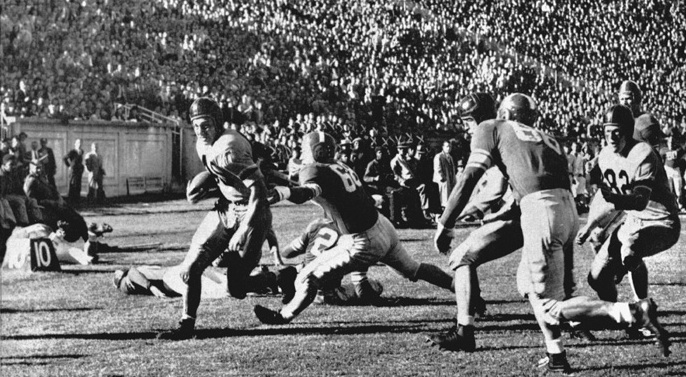 After a 1946 season that was all about transition, Mizzou took a nice step forward in 1947 ... everywhere but the win column, anyway.  Led by the likes of Bus Entsminger, the Mizzou offense was mostly unstoppable, surging from 75th in 1946 to 25th in 1947 (it would move to 13th in 1948 and 10th in 1949).  The Split-T was still a bit of a novelty, and the exciting offense, full of misdirection, had plenty of huge games.  In a five-game mid-season span, Mizzou scored 47 points against Kansas State and Nebraska, 28 against Duke, 26 against Iowa State and 21 against Colorado, winning all five games by a large margin.

Unfortunately, as with the Brad Smith offense of the mid-'00s, some teams either figured out how to slow Mizzou down or was simply able to outscore the Tigers.  Mizzou lost 13-7 to a relatively poor Ohio State team in the second game of the season, then 35-19 to Doak Walker's SMU Mustangs the next week.  Then, after the five-game streak of dominance, Mizzou was 6-2 and brimming with confidence and hopes for a conference title.  Unfortunately, Bud Wilkinson's first OU squad knocked them out 21-12, and a really good Kansas team (they went 8-1-2 and went to the Orange Bowl) clinched a conference title by knocking out Faurot's Tigers, 20-14.

For the season, Mizzou's peripherals were great -- their scoring margin was +124, a vast improvement over the -8 margin from 1946, but thanks to an 0-3 record in games decided by single digits, their record only improved by a half-game.  Mizzou was setting the table for lovely seasons in 1948 and 1949, however, which would dampen the sense of what coulda been with this squad. 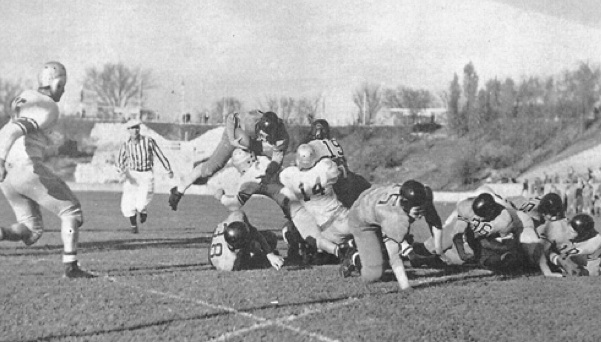 Of all the "setting the table" teams in this post, this one was supposed to be a culmination, not a transition.  After the wonderful run of 1939, Paul Christman's senior season was supposed to see another step forward for the Tigers.  Unfortunately, it didn't work out that way.  Mizzou jumped to a 3-1 start, rolling up big points against SLU (40-26), Kansas State (24-13) and Iowa State (30-14); but to win another conference title, they were going to have to beat Nebraska and Oklahoma ... and they scored a combined 7 points in those two games.  Nebraska paid Christman back for his 1939 dominance with an easy 20-7 win, and in their late-season trip to Norman, OU won 7-0 after a late desperation pass came up just short.

Sure, there were still plenty of dominant moments -- Mizzou dominated NYU 33-0, beat Colorado 21-6, and killed Kansas 45-20 in Christman's final game -- but the disappointing losses to the Huskers and Sooners put a damper on the season overall.

As I mentioned, this was not intended to be a season of transition, but that's what it became.  Don Faurot was so worried about the offense after Christman left, that he started tinkering.  Hoping to utilize the skill set of Christman's replacement, Bob Steuber, Faurot installed a small set of plays that relied on larger splits and what is known now as basically the zone read concept, letting the defensive end go unblocked and reacting to how he commits to his pursuit.  It baffled defense after defense in 1941, and instead of completely falling apart after the loss of an NFL star in Christman, Mizzou took a large step forward.