Thank you, numbers, for creating the perfect segue ... 1997, meet 2003.  Back to back.  Fantastic.  Plus ... it probably says good things about Mizzou's history that neither of these two teams, both of which we look back upon in extremely fond ways, cracked even the Top 35 of this list.  Mizzou's had more success than we maybe let on sometimes, and in more decades than just the 1960s.

Oh yeah, and good: Mizzou won 8 games with the youngest two-deep in the country, which at one point featured as many as 35 freshmen, redshirt freshmen and sophomores.  Though Mizzou fans tend to harp on the negative as much as humanly possible (strangely, it appears to make us feel better), the experience the team gathered while still maintaining respectability could be key over the next two seasons.

When I ponder how exactly to go about writing a book about Mizzou football history (it's still in the cards, but it's going to take a while), I wonder about word counts and page numbers.  Some seasons, you can summarize in a page or less.  The team had the same strengths and the same weaknesses, they beat bad teams and lost to good teams, and then the season was over.  Then, there are seasons like 1997, with enough plot twists and highs and lows and unexpected turns and craziness ... that I briefly ponder writing a book about each decade.  The 1997 season is one of those "inevitably high word count" seasons.  There could be a chapter on the 15-7 KU loss and Corby's crisis of confidence.  And a chapter on Andy Katzenmoyer's classic hit ... it was that good.

Anyway, there could be a chapter on the 41-11 loss at Kansas State, the team meetings that followed, the season reversal that occurred starting with the Homecoming win over Texas.  Then a chapter on the double-OT win over Oklahoma State -- the first half surge, the second half collapse, the one-handed touchdown grab by Ricky Ross, the greatest call of all-time from Bill Teegins, and the swinging gate.  And a chapter about the Colorado game (Rick Neuheisel after the game: "I had no idea they could do what they did to us.") and clinching of bowl eligibility for the first time since 1983.  And about six chapters on the Flea Kicker game -- one for the pre-game hype, one for each quarter, one for the play itself, one for overtime.  And a chapter on the team's recovery against Baylor.  And of course one for the Holiday Bowl.  And a final one for the way the level of pride found in the university and the city itself quadrupled between the beginning of October and the end of November.  The 1997 team, which coincided with my freshman year at Mizzou, had a sense for the dramatic -- both the good kind and the bad kind -- and though it goes on the list in the midst of a string of 6-, 7- and 8-win teams, it stands out for that reason.

Seriously, thanks again, numbers.  You couldn't have built in a better segue than going straight from the 1997 team to the 2003 team.  That is exactly how I'd have wanted it drawn up.

Another season that featured ups (Brad Smith running wild against Texas Tech and Nebraska), downs (getting romped by Kansas, struggling in basically every road game, not playing well in the Indepenence Bowl), and middles (near-losses to bad Illinois and Middle Tennessee teams before some late clutch plays), this game is remembered by Mizzou fans for one primary reason: 41-24. 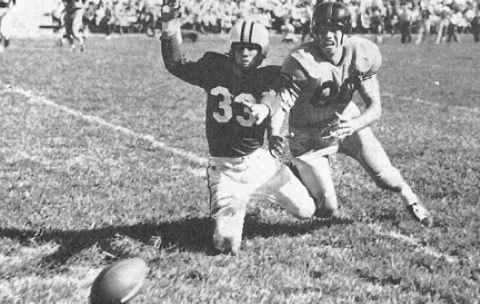 These next two seasons feature a couple of my favorite Savitar pictures that I have found yet.  (Side note: I cannot stress how useful the Savitar archive has been in making these Mizzou History posts at least semi-interesting.  I've found so many useful details and great pics.  What I might try to do later in the summer -- once all my FO and RMN Preview Mag writing is done -- is put together groups of pictures that show aerial shots of Faurot, or the Rock M, or things like that.  It's been fascinating bouncing back and forth through Mizzou history and seeing the changes. Anyway.)

You have probably gotten a good feel for how most of the early-1950s played out by now.  Mizzou took on a far-too-tough non-conference slate, got beaten around a little bit, then performed respectably in conference play.  With Nebraska struggling, the race for #2 in the Big 7 was between Mizzou and Colorado for most of the decade, though you probably couldn't glean that just by looking at Mizzou's overall W-L records.  The 1953 season played out like all the others, really, but it was close to so much more.

Things began with Jim Tatum's Maryland Terrapins visiting Memorial Stadium for the second consecutive season.  The Turtles were the preseason #9 team in the country, but would end up winning the national title.  Don Faurot's Tigers fought hard, but lost 20-6.  Mizzou bounced back well, however, taking out Purdue (14-7) at home and then comfortably knocking off a good Colorado (27-16) team in Boulder.  Standing at 2-1, Mizzou had just taken out the second-best conference opponent on their schedule; meanwhile, OU had fallen to 0-1-1 (loss to #1 Notre Dame, tie with #17 Pittsburgh) and looked quite vulnerable at the top.  Mizzou fans were likely starting to get starry eyes about how things might play out.  Unfortunately, Mizzou took an unplanned two-week vacation, forgetting to show up on road trips to SMU (a 20-7 loss to a team that finished 5-5) and, even worse, Iowa State (13-6 to a team that finished 2-7).

Now reeling, Mizzou snapped out of their funk by returning home and beating Nebraska (23-7), then taking out Indiana on the road (14-7).  At 2-1 in conference, they could still win the Big 7 by knocking off OU at home the following week.  The Sooners had bounced back, winning four in a row and moving to #8 in the country, but they were still more vulnerable than they would be the rest of the decade.  Tied at 7-7 in the fourth quarter, Mizzou drove all the way to the OU 16 before stalling and failing to score.  OU responded with an 84-yard touchdown drive to win the game, 14-7.  Two conference games, decided by a touchdown each (OU, ISU), kept a good Mizzou team from a conference title.

Mizzou responded well -- they took out a surprisingly solid Kansas State team at home (16-6), then knocked off a less-than-solid Kansas team in Lawrence (10-6) to finish 6-4.  It was a season of what-if's, but the program still seemed to be on pretty solid footing.  It was probably pretty hard to tell that Mizzou would go 9-19-1 over the next three seasons, and Faurot would retire. 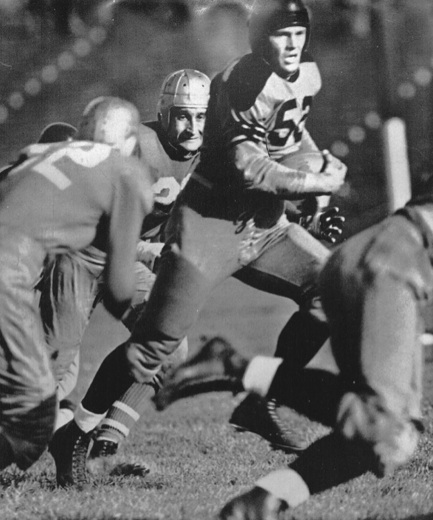 After righting the ship in 1935, his first season, Don Faurot began moving the ship forward rather quickly after that.  In 1936, Mizzou went a surprising 6-2-1, but the biggest victory may have come off the field: it was after the 1936 season that he brought in the program's first true Golden Boy recruit: Paul Christman, along with quite a few other breakthrough players.  Everybody who would make the 1939 season so memorable (Christman, the Orf twins, Stillman Rouse, etc.) cut their teeth during the 1938 season.  In a way, this was a lot like other "before the breakthrough" seasons we've discussed -- 2006, 1966, 1959, hopefully 2009 -- in which a young team looked great at times but was just too inconsistent and inexperienced to experience sustained success.

Coming off of a 1937 season that was by all accounts a step backwards (they went 3-6-1 and scored just 42 points all season, getting shut out five times and ranking 121st among 127 D1 teams), the young Tigers started well, with a 14-7 win over Colorado in Christman's first game as a Tiger (you weren't allowed to play as a freshman until the 1970s).  Unfortunately, Mizzou followed that with two conference losses, first at Kansas State (21-13), then at home to Iowa State (16-13).  Up and down, up and down ... Mizzou turned around and won two road games, first against a decent Wash. U. team (13-0), then at a less-than-decent Nebraska team (13-10).  They pulled a lovely defeat of Michigan State to start November, moving to 4-2 on the season.  Of course, here's where OU always storms in and ruins the day.  The #10 Sooners shut Mizzou out, 21-0, ending any hopes of a conference title.  Mizzou finished with a 26-0 domination of SLU and a nice 13-7 home win over Kansas.

While they rarely put up major points (they scored more than 14 only once), Mizzou was only held to single digits once, putting together a strangely consistent performance for such a young offense.  The O moved from 121st to 42nd in the Est. S&P+ ratings, while the D improved to 42nd as well.  This was a team ready to take another step forward in 1939, and they would do just that.