With this batch of teams, we start to break the seal on the two most successful decades in Mizzou history.  You know the 1960s were one of the two ... can you name the other one? 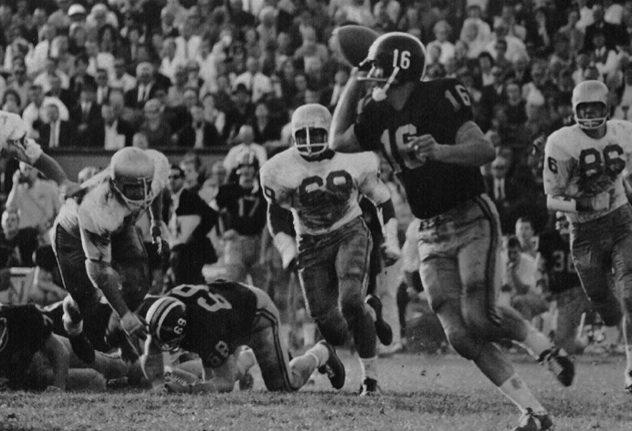 You may have noticed by now that only one team from the 1960s (1966) has shown up on the countdown to date.  That should give you a pretty good idea for what is in store for the remainder of the countdown.

The 1964 season was another one of transition.  All of the seniors who led Mizzou through the great 1965 campaign -- Johnny Roland, Francis Peay, Gary Lane, Bruce Van Dyke, Butch Allison -- were juniors, and players like Charley Brown and Jim Whitaker were just sophomores.  Seniors like linebacker (and captain) Gus Otto led the way for a team that, while solid, couldn't quite recover from a slow start.  Mizzou had gone 32-7-3 over the past four seasons, but they started with two losses in three games.  First, they lost at a bad California club (21-14), then beat Utah (23-6) and got upset at home by Oklahoma State (10-7) to start conference play.  At least three different quarterbacks took snaps, and it's likely that the flux was hurting the Tigers' offense.

From that point on, however, it was the typical Tigers.  They beat Kansas State and Air Force on the road, returned home to shut out Iowa State, and put up a fight in Lincoln before falling to #5 Nebraska, 9-0.  As the calendar flipped to November, Mizzou didn't lose again.  They plodded past an iffy Colorado team at home (16-7), managed a solid 14-14 tie at Oklahoma, and pummeled a decent Kansas team, 34-14, in the season finale.

Mizzou finished 1964 ranked 18th in the UPI polls, and though they didn't participate in a bowl (they often turned them down in the '60s), it was still obviously a respectable squad.  Their Offensive Est. S&P+ rank of 18th was their lowest in four seasons, and the defense showed improvement, ranking 62nd after falling to 82nd the season before.  As with a lot of teams in this portion of the countdown, they showed signs of life upon which they would capitalize the following season. 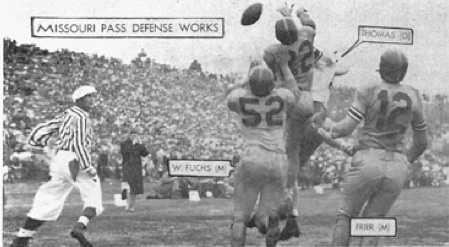 It was far from obvious at the time, but the 1949 squad would become the last Don Faurot team to win more than six games in a season.  The Split-T was becoming more familiar and less surprising throughout the country, and Mizzou's recruiting wasn't hot enough to make up for the difference.  Plus, those damn tough schedules were just killers.

How tough was Mizzou's schedule?  There were no preseason polls in 1949 -- the first poll came out two weeks into the season (novel concept!).  When the first poll was released, Mizzou was 0-2 ... and ranked 20th.  They had opened the season with painful one-point road losses to both #11 Ohio State and #9 SMU.  They wouldn't lose again until mid-November.

Once they started playing mortal teams, Mizzou racked up the wins.  They took out Oklahoma State at home (21-7) and Illinois on the road (27-20), then romped over Iowa State in Ames (32-0).  (That's right, four of their first five games were away from Columbia.)  The Cardiac Tigers kept it up heading into November.  First, they won a 21-20 thriller over Nebraska at home, then took out Colorado (20-13) in Boulder.  Strangely, after getting ranked by losing, Mizzou had fallen out of the rankings by winning close games over some mediocre teams.  They were unranked and 5-2 when they faced undefeated, third-ranked Oklahoma for the Big 7 title on November 12.  As was the trend at the time (average margin of OU victory over Missouri from 1946 to 1959: 25.7), OU killed them, 27-7.

After two more tight wins over Kansas State and Kansas, which them 5-2 for the season in games decided by a touchdown or less, Mizzou accepted a bid to play Jim Tatum's Maryland team in the fifth ever Gator Bowl.  A year after losing to undefeated Clemson by one, Mizzou's second consecutive trip to the Gator was not as competitive.  As would be a trend (Faurot played his former protege Tatum six times, losing all six by an average of 21.2 points), the Terrapins jumped out to a 20-0 first-half lead and coasted for an easy 20-7 win powered by five Mizzou fumbles.  It was Mizzou's sixth bowl game, and the fifth since hiring Faurot, but the Tigers would have to wait another 11 years for their first bowl win. 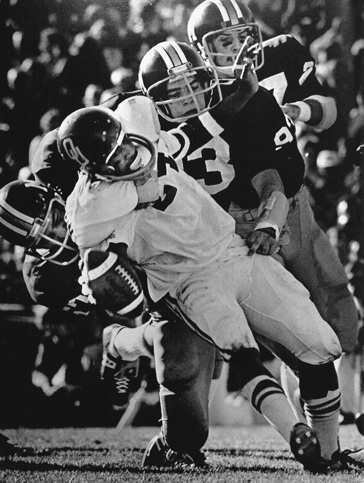 Yesterday we heard from a member of the 1974 and 1976 Mizzou teams who verified what we had suspected about those mid-1970s squads.  The talent and the big-game mentality were there, but the lesser games consistently tripped Mizzou up.  The 1975 squad was a bit better than either teams sandwiching it ... but the result was mostly the same -- a huge, memorable win and a 6-5 season.

The "huge, memorable win" in this case was potentially one of the most startling Mizzou has had.  They traveled down to Birmingham to take on mighty #2 Alabama, who was coming off of an 11-1 campaign, and they absolutely demolished the Tide.  Bear Bryant's offenses at this time were insanely good.  Since adopting the wishbone in 1971, the Tide ran it better than anybody, but at Legion Field that day, they gained only 118 total yards.  Mizzou went up 20-0 at halftime and coasted to a 20-7 win (just like Maryland did to Mizzou in the 1950 Gator Bowl).  You can read more about that game here.

The second half was a formality, at least the Mizzou defense made it that way.  Twice, Mizzou fumbled deep in their own territory, and a botched punt snap gave Alabama yet another opportunity, but the Tide would only score once, on a deflected touchdown catch by Ozzie Newsome.  Led by tackle Keith Morrissey, who had three second half sacks, Mizzou would not let Alabama even think about coming back into the game.

When it was over, Columbia erupted.  Students filled the Quad, where fireworks were shot and Marching Mizzou showed up.  The impromptu parade spilled into downtown, where somebody etched "Missouri 20, Alabama 7, 9-8-75" into fresh cement.  You just simply did not do to a Bear Bryant team what Mizzou did to them that Monday night.  This was the only game 'Bama would lose in 1975.

How good did Mizzou look in this game?  They went straight from unranked to #5 in the country.  They remained at #5 heading into October after wins over Illinois and Wisconsin (amazingly, these two teams were the "cupcake" portion of the schedule ... yikes), but starting with a trip to Ann Arbor, it was one step forward, two steps back the rest of the season.

Mizzou was ranked in the Top 20 almost all season, yet finished with just a 6-5 record thanks to a) an absolutely ridiculous schedule (six ranked opponents), b) missed opportunities (the one-point loss to Oklahoma was a dagger), and c) another slip-up against Kansas in the finale.  This team ranks ahead of those from 1974 and 1976, primarily because there were no egregious losses -- even Kansas finished 7-5 and was ranked as recently as the week before the MU-KU game.  There were, however, lapses and blowout losses -- by 24 to Michigan, by 11 to Colorado, by 23 to Nebraska, by 18 to Kansas -- which, after their perfection against Alabama, was hard to accept.

If people take one thing away from this countdown, it should be that there was indeed life in Columbia before Don Faurot.  (Well, sort of without Faurot -- he played on the 1922-24 teams.)  Mizzou Football in the 1920s was constantly fighting for MVIAA titles with the likes of Nebraska, finishing second in both of James Phelan's years as Mizzou head coach (1920-21).  In all, teams from the 1920s claim seven of the top 27 spots on this list, making it likely the second-most successful decade for Mizzou football behind the 1960s.

The 1921 squad was well-rounded -- 32nd on offense, 36th on defense -- pitching four shutouts and outscoring opponents 136-50.  They would not face a dominant Nebraska team for some reason, but two tight losses to Kansas State (7-5) and Kansas (15-9) prevented them from seriously competing for the conference title.

This really was a good team.  The tight losses overshadowed some huge wins.  They outscored Oklahoma State (then Oklahoma A&M) and SLU, 68-0, to start the season and took out Oklahoma, 24-14, in the home finale.  Perhaps their most impressive win came against a Drake team that outscored all other opponents 149-34.

Gwinn Henry's 1927 Tigers, the last Mizzou team not to play in Memorial Stadium, took on one of their toughest schedules of the era -- six of their nine opponents finished with records of .500 or better -- and emerged with a 7-2 record to show for it.  They were the last of Henry's three conference champions.

Coming on the heels of what you will see was Mizzou's best season of the decade (1926, ironically not a conference title season), the 1927 squad hit the ground running.  They took out two conference opponents at home to start the season, knocking off Kansas State 13-6, then taking a thrilling 7-6 win over Nebraska.  A 13-0 road win over Wash. U. meant that the Tigers had made a strong claim for a conference title before their non-conference slate even began.

For their first non-MVIAA game, Mizzou traveled to SMU and got taken apart by a rugged SMU machine, 32-9.  The Mustangs had one of the best defenses in the nation around that time, and Mizzou wasn't up for the fight.  But they bounced back to notch one of their most impressive wins of the era, a 34-19 trouncing of a Northwestern program that was one of the country's best at this time.  Really, beating any Big Ten team at the time was impressive, but taking out one of its best programs, by two touchdowns on the road?  A great win indeed.

After dispatching of West Virginia at home, it was time for Mizzou to lock up the conference crown.  They traveled to Ames and took out a solid Iowa State program, 13-6, meaning they needed to win just one of their next to games to clinch the MVIAA.  First up: Kansas, who had knocked them off only once in their last five meetings.  Unfortunately, as has been the case often throughout the Border War rivalry, the more talented team was tripped up on the road.  The Jayhawks pulled a 14-7 upset, which meant Mizzou had to knock off OU for the conference title.  And for once, OU didn't ruin Mizzou's plans!  The Tigers' 20-7 victory finished off a successful 7-2 season and gave Gwinn Henry his third conference title in four years.

This was the peak of the Henry era.  Mizzou would take a step backwards in 1928, put together one more run in 1929, and ... that was about it.  The 1930 and 1931 squads were miserable on the field, and Henry was miserable off of it.  Health problems sidelined him a bit, and the 1931 squad ended up being his last in Columbia.