Today's theme: great defenses and the offenses that held them back. 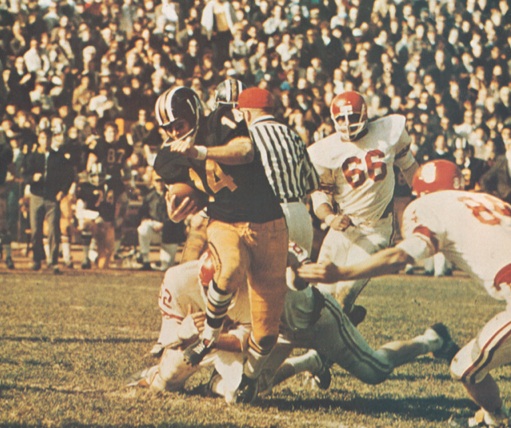 Dan Devine built the Missouri program like you are somewhat forced to do at non-elite programs like Missouri: in cycles.  Just look at Mizzou's year-to-year season point differentials in his time in Columbia:

Devine's teams were always scrappy and well-coached, but he always built toward certain seasons when the well-coached players were also experienced.  His 1958-62 cycle had a couple of different peaks, the 1963-65 peaked pretty clearly with the '65 Sugar Bowl squad, and nothing can probably top the double-peak of 1966-69 cycle. (Of course, it also bears noting that, despite the sometimes small point differentials, Mizzou still finished in the Est. S&P+ Top 16 six times in the decade, and in the AP's Top 11 five times.  They were really good even when it appeared that they weren't that good -- they knew how to win.)

I bring this up because all the clues for the dominance of 1968-69 were in front of everybody's faces during the 1967 season.  With a team dominated by sophomores and juniors, Mizzou allowed just 7.6 points per game, flew under the radar all season (not once were they ranked), and almost took out an Oklahoma team that finished third in the country.  They were a bit on the offensively-challenged side, averaging just 13.4 points per game, but when the O came around in 1968-69, Mizzou became one of the best teams in the country.

At first, it seemed like Mizzou had more than enough offense to win big in '67.  Thanks to the running of quarterback Gary Kombrink, they outscored SMU, Northwestern and Arizona by a combined 51-9 in non-conference play, breezing to a 3-0 start.  The Northwestern game (a 13-6 win in Evanston) was closer, but the outcome was still never in doubt.  Defensive backs Roger Wehrli and Butch Davis were dominant.

The going got tougher in conference play.  Sixth-ranked Colorado was able to rein in the Mizzou offense, allowing only a long Kombrink touchdown run and pulling away, 23-9.  Mizzou took out their frustrations on a hapless Iowa State squad, then faced off against an Oklahoma team that was starting to get rolling.  They completely held the Sooner offense in check, but they just had no firepower.  The Sooners won, 7-0, eliminating any hopes for a Mizzou Big 8 title.

From there, Mizzou got rolling again.  The defense allowed just six combined points against Oklahoma State (a 7-0 win) and Kansas State (28-6), setting up what had to be the highlight of the season.  In the home finale against Nebraska, Mizzou held a team that was ranked #7 in early October to just 11 total yards in a 10-7 win.  Despite the relative youth and the offensive problems, Mizzou had moved to 7-2 overall, 4-2 in conference.  A setback came in the finale -- they lost 17-6 to Kansas, their first of back-to-back losses to the birds -- and Mizzou would once again say no to a bowl opportunity.  But with players like Wehrli and big offensive lineman Russ Washington returning for 1968, the table was set. 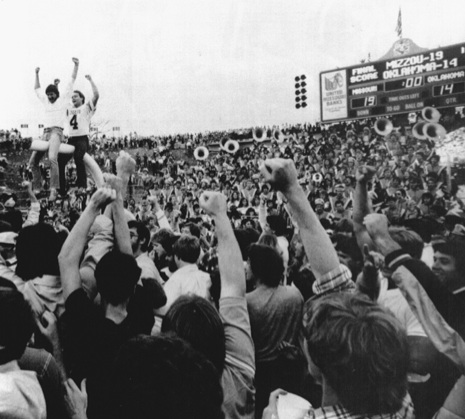 When we talk about Mizzou's history, it's easy to gloss over those first couple of 1980s teams.  The narrative basically goes, "They were great in 1978, started to slide, then fell off a cliff when Warren Powers was fired."  That's true, more-or-less, but there was still some strong football played after 1978.

In a lot of ways, the 1981 season played out like the 1979 and 1980 campaigns -- hot start leads to Top 10 ranking, October fade leads to disappointment.  In 1981, the fade was more pronounced than in other years, but the effect was the same.  Not much was expected of this team at the start.  They had lost the two primary faces of the program -- Phil Bradley and James Wilder -- after the 1980 season, and they were expected to regress.  But nobody told new quarterback John Hyde, who was unstoppable in non-conference play.  Mizzou outscored their four non-conference opponents by a combined 114-26, culminating in a late-September 14-3 defeat of #9 Mississippi State (Bobby Meyer had 122 rushing yards and two touchdowns to lead the Tigers).  When the Tigers killed Kansas State, 58-13, and moved to #9 in the country, all was well.

Unfortunately, as was the trend, early-October represented the high point of the season.  Star lineman Brad Edelman tweaked his knee and missed the Iowa State game, and the Mizzou offense fell apart in Ames.  Iowa State dominated the Tigers, 34-13, and while most Mizzou fans at the time probably had that "Here we go again" feeling coming on, Mizzou responded with a fantastic performance against #15 Nebraska in front of 70,000 at Faurot Field.  The Huskers averaged over 30 points per game for the season, but the game was a scoreless tie heading into the game's final 30 seconds, when Nebraska finally scored and escaped Columbia with a 6-0 win.  (It's funny to think about how many close games these two teams played at the start of the 25-game NU win streak over Mizzou -- five of the first seven games in the streak were decided by 10 points or less.)

Reeling from the rugged game against the Huskers, Mizzou fell apart in a rainstorm against Oklahoma State -- leading 12-9 late, they fumbled, and Oklahoma State returned it for a touchdown and a 16-12 win.  Mizzou bounced back with more solid defense (led by undersized All-American tackle Brad Gaylord, they only once all season did they give up more than 19 points all season), beating Colorado by a 30-14 margin, then returning home for the highlight of the season.  Against #15 Oklahoma, Mizzou held Buster Rhymes to just 35 yards rushing and forced EIGHT turnovers; Gaylord locked up All-American honors that afternoon, recording 12 solo tackles (FIVE for loss) and recovering three fumbles ... a positively Suh-esque performance from the 225-pounder.  (Yes, he was an All-American tackle at 225 pounds.)  New quarterback Brad Perry gave Mizzou just enough offense, and Mizzou pulled off a 19-14 win, their first over Oklahoma since 1969.

At 7-3, with a bowl game all but locked up, Mizzou predictably (as seems common on this list) lost an annoying game in Lawrence, 19-11, but bounced back with a 19-17 win over #18 Southern Miss in the Tangerine Bowl.  They finished the season ranked 19th in the country, second-best for any Big 8 team (NU finished #11).  This was another gritty team with a great defense, but as with 1967, offensive breakdowns held them back.  Unfortunately, unlike 1967, two wonderful seasons were not on the horizon. 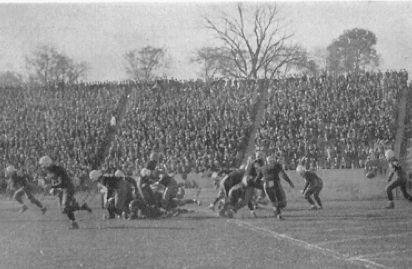 I plan on unrolling a fuller look at this team some time in the near future because, thanks to the lovely (and recently shrunken ... boo) Missourian archive, one can read the day-to-day developments for both the Missouri football team and the world around it.  The stock market was crashing, and the Mizzou football program was about to do the same, but as a moment in time, the 1929 season was fascinating.  Because of the success of Gwinn Henry's mid-1920s Tiger teams, Memorial Stadium was built to house a quickly growing Mizzou fanbase.  Enthusiasm in the program had maybe never been higher, even after a relatively disappointing 4-4 campaign in 1928.

The 1929 was an experienced, physical squad.  Five of their eight games came against teams that finished at least .500, and they were more than competitive in every single game.

In their second season of the new Big 6 conference (the six teams -- MU, Nebraska, Kansas, Kansas State, Iowa State and Oklahoma -- broke apart from the rest of the Missouri Valley), Mizzou wasted no time making a statement.  In their season opener, they pummeled Iowa State in Ames, 19-0, to move to 1-0 in conference.  After mauling a good Drake team, 20-0 (Drake was basically the class of the remaining MVIAA teams), Mizzou played host to Nebraska in what was potentially the biggest game in the program's history at the time.  I will go into great detail about this game -- how it took place just as the stock market was falling apart, how the Missourian articles at the time talked about beating the "hated" Huskers and grousing about the large number of NU fans coming to Como for the game (the more things change ...) -- at a later date.  Just know that it was as intense a game as could be played in 1929, and it finished in a frustrating 7-7 tie.  Mizzou followed that up with a hungover 7-6 loss to Kansas State before taking out another former MVIAA conference Rival, Wash. U.

Mizzou was 3-1-1 when they took the train to New York for a battle against a solid NYU squad.  In a game decided by just a play or two here and there, NYU won 14-0, but Mizzou bounced back well.  They knocked off Kansas in Lawrence (7-0), then welcomed OU to Homecoming at Ol' Mizzou and sent them back to Norman with a 13-0 defeat.

For the season, Mizzou went 5-2-1, giving up just 28 points all season.  Despite an average offense that ranked 69th in my Est. S&P+ rankings, the defense ranked 16th, pitching five shutouts and giving up double-digit points just once.  They came up just short of their fourth conference title in six years, but everything about the state of the program seemed strong.  The program was successful, the fanbase was every bit as obsessed as that of Nebraska and others, and it felt like Mizzou was almost ready to become a national program like those in the Big Ten (which was not yet known as the Big Ten).  Of course, then the team began to fade, Henry was let go, and Frank Carideo ran the program into the ground for three seasons.  But as an isolated moment, the 1929 season was one of momentum and intensity, not unlike some of those in the late-1970s and early-1980s.  A collapse was imminent, but in a time of wins and a growing fanbase, nobody knew it.