As you have probably heard, Rock M Nation is working to become BFF with MU softball coach Ehren Earleywine. He's pretty much the coolest collegiate softball coach in the country. YEAH, I SAID IT, TOLEDO SOFTBALL COACH TARRAH BEYSTER.

And one of the reasons we think Coach E is awesome is because of his facial hair, which we have so gracefully named "Tremendous Stubble." Why? I mean...look at it. 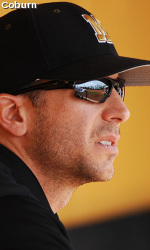 We're really hoping to get a "Tremendous Stubble" reference from Coach E in some sort of media venue, as a way of reciprocating our totally awesome bro-mance. But we also understand that just wanting to be BFF with Coach Earleywine is not enough. We've got to make sacrifices.

And that's where the RMN community comes in. What I am asking from you, the loyal RMN reader, is to give me your word and your commitment. That commitment: a playoff beard.

In the comments, I'm asking you to pledge that you will grow a playoff beard for the MU softball team if Coach Earleywine mentions "Tremendous Stubble" in a media outlet. That way, not only will you be supporting the MU softball team on their road to championship destiny, but you'll also be imitating our future BFF, Ehren Earleywine.

I, ghtd36, do hereby swear to grow a playoff beard for the duration of the Mizzou softball team's postseason run IF Mizzou coach Ehren Earleywine mentions the phrase "tremendous stubble" in a media outlet.

Don't let me down, Rock M Nation. Together, we can enter into Tremendous Stubble history and begin our bro-mance with Coach E.

The Tremendous Stubble movement is moving forward at a blistering pace. What follows is a list of those committed to greatness (read: those who have pledged to grow a playoff beard upon Coach E's mention of "tremendous stubble"):

That's 16 playoff beards hanging in the balance. And there's still time for you to commit (ahem, RPT and Bill).

Also, the Tremendous Stubble movement has gained many celebrity friends through Twitter (remember: Tweet #TremendousStubble). I recommend thanking them by following them and reminding them that they are patriots.

Thanks for your courage, everyone. You're an inspiration to dozens.

TREMENDOUS STUBBLE IN THE MEDIA

KOMU Story (click the video on demand on the right)

If you're attending the Super Regional games at University Field, make sure to print out a sign to support the movement!