In the tradition of Stuff White People Like (which was later brilliantly parodied by Every Day Should Be Saturday), I'm going to intermittently kill time this offseason by examining Stuff Mizzou People Like. Today's edition:

Recently, Rock M Nation had to reiterate its hardline stance against political talk in its threads. And, to be honest, the hostile division between the political right and left need not carve out a place in these hallowed interwebs. Why? Because Mizzou People have their own incredibly divisive, incredibly hostile, incredibly inciteful pastime:

On one side, meet the Radical Party. They want change, and that blonde-headed offensive coordinator and that visor-wearing head coach won't run the ball. Football's a ground game, and they want to remind you of it 2.7 yards at a time. It's not your win-loss record at stake, it's your manhood, nancies.

On the other side, the Stability Party. The air attack is the wave of the future, and this sect of Mizzou People is ready to ride that s**t. Plus, nothing quite makes their day like alienating Radicals.

No matter which camp they align themselves with, Mizzou People have their opinions, and damn it, they want you to know them. Whether it's out at tailgates, in the bleachers, or on the Web, Mizzou People can be found preaching their fullback version of the gospel, whether it be the Good News or a Condemnation.

The only thing that some Mizzou People love more than their opinions on The Great Fullback Debate is making jokes at the expense of both parties. For more election cycles than we can count – and, for the record, we can't count past six – Mizzou People have adopted the "FULLBACK!!!!1!11!!one!!1!" joke as perhaps the longest running joke in Mizzou People history. In fact, we're pretty sure Mizzou People have gotten more mileage out of fullbacks than all of the coaches in Big Ten history combined. Unlike the Southwest Conference, the Wishbone, and Michael Jackson, the beaten-to-death fullback jokes... simply... won't... die.

Depending on how some Mizzou People see it, conversations and jokes about fullbacks can be either trojan horses or dead horses. To others, the debate is the white horse of the apocalypse, Pestilence, because they're simply just sick of the entire bit.

So, Mizzou People, continue to either embrace or denounce patron saints/messengers of death like Daryl Johnston and Lorenzo Neal. Don't let the absence of a blocking back block you from parleying about a topic/beaten-down joke that's been better covered than the Gulf of Mexico has been by oil. 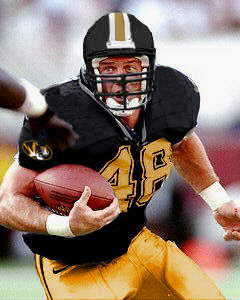 Mizzou fans silently weep, either for joy or out of fear.

THE LIST:
No. 1 - Comparing everyone to Clarence Gilbert
No. 2 - Bitching at Columbia Tribune beat writers
No. 3 - Fullbacks, fullback jokes, and beating fullback-related dead horses