Thanks to MIZZOUEXPANSIONAPALOOZA™, we are a week behind on our opponent previews, so while I know it will break some people's hearts, we are somewhat merging San Diego State Week with Miami-OH Week.  If you want to cancel Rock M subscription because of this outrage, I understand.  You will receive a full refund of your $0.  That said, let's move forward with some big-time Aztec previewing...

While SDSU certainly improved in 2009 -- their scoring margin went from -215 in 2008 to -86 last season -- they still have a long way to go.  They went 3-3 against teams ranked 87th or worse last year, 0-5 against teams ranked higher than that (average score: 38-15).  Brady Hoke is a good coach, and they will likely continue to improve, but  you have to figure the Aztecs are still a year or two away from bowl contention. 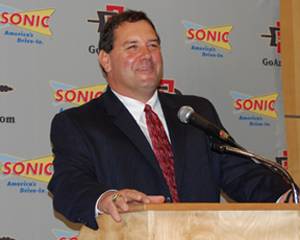 After the failed Chuck Long Experiment, Brady Hoke took over the reins as SDSU head coach last season, and the Aztecs showed demonstrable improvement in his first season.  Hoke, you'll recall, was at the helm at Ball State when the Cardinals went 12-1 in 2008.  He left for his sunny alma mater and set about improving what seems like it could be at least a mid-sized sleeping giant.  A sleeping mama bear, at the very least.

When Ball State took off, it was sudden -- the Cardinals won just 15 games in Hoke's first four years, then improved to 7-6 in 2007 and 12-1 in 2008.  He apparently needs to get his own recruits into the system before thriving, and SDSU is still in transition in this regard.

The Aztecs weren't good at much in 2009.  They continuously put themselves in 2nd-and-long situations with one of the worst first down / standard downs offenses in the country.  Some solid play-making from quarterback Ryan Lindley allowed them to keep some drives going -- they ranked much higher on passing downs than standard downs -- but still ... a long way to go here.  If there is something to build on here, it's that Lindley returns, as do four starters from a line that protected Lindley quite well.  Now if they can just open some running lanes ...

With a record of just 22-49 over the last six seasons, it should not come as a surprise that SDSU really hasn't been consistently good at much lately.  They were decent running the ball in 2007 and solid throwing in both 2007 and 2009, but success hasn't been sustained.  Considering the "slow-build" model that Hoke seems to follow, we could potentially see the passing game become a solid strength this year, but the play-calling, personnel, and running game are still problematic, to say the least.

One of the higher-ranked recruits from the Chuck Long Experiment, Ryan Lindley, from nearby Lakeside, CA, is easily the face of the SDSU offense.  His completion percentages is not quite high enough for him to be a top-flight quarterback just yet, but in two years of starting, under two different head coaches, he has amassed 5,704 passing yards and 39 touchdowns to 25 interceptions.  Considering how often he has to throw (because his team is usually losing, and SDSU has no running game), he has done quite well for himself.  With Mizzou's occasional struggles in defending the pass, a big game from Lindley is clearly the Aztecs' best ticket for an upset.

Only Washington State and Duke were worse at running the ball than San Diego State was last year.  Brandon Sullivan assumes a fullback role this year after leading the team in rushing, but while Walter Kazee was semi-competent in his freshman season, the Aztecs' hopes are all pinned on freshman Ronnie Hillman.  A do-it-all back from La Habra, CA, Hillman was ruled ineligible for the 2009 fall semester, but he enrolled in the spring and won the starting job.  He is small but explosive and could be dangerous as a receiver out of the backfield.  Despite HIllman's presence, however, this is still a rather poor unit.  Kazee and Brown are relatively quick, but not explosive, and ... well, units don't go from 117th to good in one year.

Lindley's two favorite targets return for their senior seasons in San Diego.  DeMarco Sampson and Vincent Brown, two decent-sized, big-play receivers, are back and might provide as interesting a challenge to the Mizzou secondary as anybody Illinois puts out there.  This is a nice non-conference test for Mizzou -- you want them to face opponents good enough to make them work, but not good enough to dominate them, and SDSU's passing game fits that bill.  They were decent last year, and they will likely improve ... and Kevin Rutland, Carl Gettis, and company better be up for the challenge.

It's always fun to see lines that rank as polar opposites in different categories.  The SDSU offensive line could not open a running lane to save their lives, ranking 115th in Adj. Line Yards.  But they protected the passer as well as anybody in the Mountain West, and their Adj. Sack Rates were the main impetus in them ranking 33rd overall in 2009.  They have four returning starters, three of whom are upper-classmen, and they signed beefy tackle Juan Bolanos this past signing period.  Loaded with experience, this unit should also provide a solid challenge for the Mizzou defensive line.

As I said, this is the perfect early-season challenge for the Mizzou defense.  They will provide a bit of resistance for both the defensive line and secondary, but if Mizzou is truly thinking about challenging for the final Big 12 North title, they will be able to handle SDSU, at least by the second half.  Expect maybe a couple of scoring drives from the Aztecs in the first half, following by a bottling-up by the third quarter.