1. Will the lameduck status of Nebraska and Colorado change the dynamics of competition on the court and field this year, or will it be a non-issue for the players and coaches?

3. Which Mizzou athletics figure (past or present) would you most like to get drunk with?

4. For all the beer snobs … If you were forced to buy an ice cold six pack from a mom ’n pop bait shop this summer, what brand of sh*tty beer would you choose?

Michael Atchison: 1. It’s a non-issue.  In the heat of a game, no one thinks that way, and I’m guessing the players actually care less about all of that than the hardcore fans do.  Also, there will be no conspiracy of officials out to get those teams.  Nebraska is going to be treated rudely by fans everywhere they go (Colorado won’t get it bad), but that’s fans, not players.

2. I don’t want to pick a favorite; I just want to take note of how much of a rout this is in Missouri’s favor.

3. I actually possess one of Sparky Stalcup’s engraved bar glasses.  I would have liked to share a drink with him.

4. Having just picked up some Schlitz the other day, I’m going with The Beer That Made Milwaukee Famous.

A new Roots album came out yesterday.  I’m impressed that Bill was able to pull himself away long enough to kickstart this Roundtable, though it surely explains his inability to create any of his own questions.

Bill C.: I've been listening to both The Roots' new album and Chali 2Na's on repeat the last two days.  The Roots seem to have reached a mid-life phase not unlike where Wilco is at right now.  They work just amazingly well together as a band, and they create very pretty music ... but a lot of the rawness and energy that they produced in the '90s and early-'00s is gone.  Not saying this is a bad thing ... it's just a different tone of music.  That said, there are 3-4 beautiful songs on the Roots' album ... and that's not a word one typically uses with hip hop.  Love those guys.

1 - Knowing how hard coaches try to get the "DISRESPECT!!!" thing going in the locker room, I guess it could be used as a motivator, but Atch is right ... while fans will treat Nebraska and Colorado (okay, probably just Nebraska) with 1% extra hostility, I doubt it has an impact on the field.  Though I certainly wouldn't mind if there were a ref conspiracy, amiright???

2 - I'm loving John Hamm's work right now, but there's not nearly enough of it to put him at the top of the list.  I've got a soft spot for Robert Loggia, or at least his voice, but instead of picking one, I'll just reminisce on the 2007 MU-KU ESPN Gameday, when they flashed up a "famous entertainers" graphic.  For Mizzou, it was something like Brad Pitt, Sheryl Crow and Loggia (can't remember the third person for sure) ... and for KU it was Don Johnson and Mandy Patinkin.  We beat KU twice that day, once on the field, and once on that graphic.

3 - Since The Beef isn't on this roundtable, I'll answer this question for him: Brock Olivo and the 1997 offensive line.

4 - My three sh*tty beers of choice have always been, in order, 1) Iron City (not that you can get that many places in the Central Time Zone, though for some unknown reason a liquor store in OKC always has it when I stop in while visiting the parents), 2) Old Style, and 3) MGD.  If cold enough, almost any sh*tty beer is drinkable ... but let's just say that while I do enjoy a nice, cold Iron City or Old Style from time to time, this snob is very much enjoying the fact that the newly-redesigned Schnuck's in Como is staying fully stocked on Brother Thelonious.  It is just tremendous.

1 - It's going to be a non-issue on the field.  It's a game we have to play under the same rules and we need to win them just as badly.  The fans are certainly going to focus on the "last time" we play them, and the announcers won't shut up about it, but it's just a conference game.  And man do we need to beat Nebraska in Lincoln this year.  Not because it's the last time we're likely to ever play there, but because we probably aren't winning the North without winning at Lincoln.

3 - Chase Daniel.  Seems like he's going to be a good ol' boy, he can probably throw it down, and I'd love to pick his brain sober let alone drunk.

4 - If I'm going to drink a shitty beer, I stick with Bud Light.  That's about as shitty as I'm willing to go, otherwise it's just not worth drinking beer.  Life is WAY too short to drink shitty beer.

Michael Atchison: Since this Roundtable is going to need an extra boost, and because we’re already talking about hip hop, check Tech N9Ne giving an M-I-Z Z-O-U shout and enjoying some barbeque.

Doug: 1 - It might make for some interesting post-game handshake interaction between the coaches.  I'm certainly hoping Joe Dooley tells someone to eff off.  But, actually on the field, it'll be minor compared to any time Nebraska fans go on the road.  Colorado fans... well, they don't travel and no one cares about them.

2 - I've always been a Scott Bakula fan.  And, yes, Missouri does have more famous Hollywood alums than KU, I'll gladly give you that one and take famous NBA alums instead.

4 - Just for the hell of it, I'd grab Iron City or Milwaukee's Best.

Michael Atchison: Yeah, it’s probably best that Nebraska doesn’t visit Columbia this year.  I think the hostility of our fans is grossly overstated, but I suspect an invasion of the corn would provoke some ugliness this season.

Bill C.: At the same time, though ... it really is a damn shame that last year's game had to be their last in Columbia for a while/ever.

Michael Atchison: Poses an interesting question:  Will Missouri ever play them again in football or men’s basketball?  I bet not for a long time, and hoops probably happens first.

Doug: I just hope the conference knows well enough to not make a big deal about it being Nebraska and Colorado's last year in the conference.

And, to job the hell out of them if either one has a chance to win a title in any sport.

Michael Atchison: I’m confident the league won’t be giving them parting gifts on their final tour of Big 12 schools.

And this kind of talk is good.  Nebraska makes a better villain than Jay Nixon.

Doug: Yeah, but Nebraska will no longer wear the mantle of villain after this season.  Jay Nixon should use this grace period to learn how to keep his mouth shut.

Bill C.: Missouri politicians are either morons or bigmouths, with really no in-between.  Nixon got to where he is despite a tendency to shoot his mouth off ... and I have no hope that he'll change now.

Bill C.: I dunno ... Truman did have a bit of a big mouth on him sometimes.  Not always a bad thing, but ... sometimes a bad thing.

That, and ... Truman was in office 60+ years ago.  Probably about time we had another couple of great ones, eh?

Michael Atchison: After this season, Texas reverts to its default position as the league’s villain.

1. It's a complete and total non-issue. I doubt Blaine Gabbert is going to go into Lincoln saying, "Hey! They're leaving our conference! NOW I'M REALLY GOING TO TRY TO BEAT THEM!" Beyond that, I don't know if I really understand the anger directed toward Nebraska and Colorado for leaving. You may not like how they handled it -- particularly a certain Osborne character -- but they made the move they thought is best for them. I can't blame them.

On the KU side, Jason Sudeikis is slowly rising up my SNL power rankings, if only because of his portrayal of Pete Twinkle. 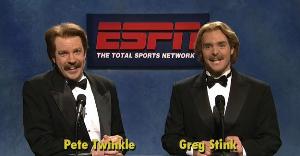 3. I mean, the answer has got to be Quin Snyder, right? Can you imagine the stories he'd have to tell if you get a whiskey or seven in him?

4. Lone Star is a good-strong bad Texas beer, so that's a choice. I had a good Miller High Life kick in college at one point, and it remains near and dear to my heart. Can't go wrong with Mickey's either.

ZouDave: USA should be up 1-0, maybe 2-1 if you want to be REALLY fair to both teams.  Have to freaking finish our shots, not get BS calls from the refs and our defense needs to close ranks a little faster.

ghtd36: Tommy Smyth on radio is greatness. Though it's wholly possible that I just love his accent.

Bill C.: I can't breathe.  No sport gives me this much constant anxiety.

Bill C.: By the way...as a well-conditioned Mizzou fan, I just assumed Algeria would immediately respond with a score...which would have been the biggest punch-to-the-junk in the history of American soccer...

ghtd36: The sad thing is that I thought the exact same thing.

Doug: As a guy who's watched too much World Cup now, I was waiting for the ref to disallow the goal.

Michael Atchison: That went from an absolute disaster for American soccer – can you imagine how the soccer skeptics would have reacted had the team failed to advance because of two wrongly disallowed goals? – into the best thing that has ever happened for American soccer.

Doug: I'm listening to the play-by-play call again and it rivals any call by Gus Johnson times a thousand.

Bill C.: After the penalties/cards in 2006 and the handball in 2002, this would have been the third straight World Cup where the US was prevented from advancing at least in part because of bad officiating.  Of course, every tight loss in soccer has that aspect to it (they really really really really need a second ref running the field...and maybe a third, fourth and fifth), but still...

SUCK ON THAT, ALGERIA, AND YOUR UNENVIABLE GDP! WOOOOOOOOOOOOO!

RPT: How pissed are the Slovenians right now?

Doug: I bet they're not doing that stupid dance right now.

ZouDave: it's their own GD fault, just force a draw against England and you're through.  Suck on that, Slovenia.  You shouldn't have gotten a point from us, either you f*** whores.

ghtd36: ZD's a little fired up. Or sauced up. Or both. Probably both. Definitely both.

ZouDave: no booze at all.  Heading to boot camp right now to workout...good luck matching my fucking energy today!!!

Time to put together a USA highlight video, I guess.  Should I do it to the song linked here earlier?  I think so.

Bill C.: And by the way...how about the freaking hurl from Howard that started the breakaway for that goal???  Everything was perfect on that play.

Michael Atchison: An unrelated note: I discovered this week if you Google my name, one of the image results that pops up is a photo of Minka Kelly.  God bless you, RMN Roundtable.

ZouDave: Hopefully this time next week we can have a question about "How much farther can USA go in World Cup?"

Bring it on, Ghana.  We owe you revenge from 4 years ago.

Bill C.: And by the way...god bless the World Cup for giving the United States a reason for wanting "revenge" against ... Ghana.

Doug: I want revenge on all countries on principle whenever international competition rolls around.

Makes for a much more interesting time watching the sharpshooting events..