Share All sharing options for: Oklahoma: Beyond the Box Score Defensive Preview 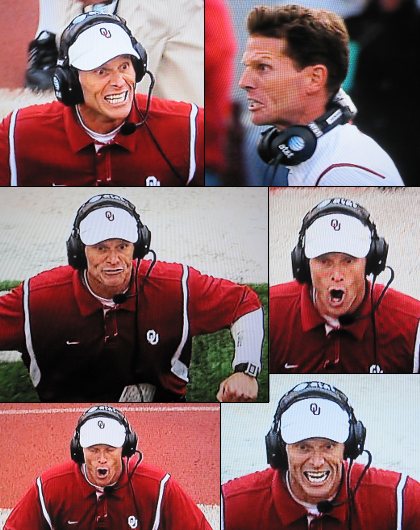 Defensive coordinator/crazy SOB Brent Venables has figured out the spread as well as any defensive coach in America (Image via MattHaugland.com)
---

On Friday, we discussed an Oklahoma offense that took its lumps last season but should be expected to make major strides in 2010.  Now we talk about a defense that suffered quite a few losses this offseason ... but is anybody really too worried about them?

Never has a Bob Stoops defense been forced to make as many plays as the 2009 Oklahoma defense was.  With an offense that was consistently struggling to stay above water due to youth and injuries, OU stayed close in every game (Texas Tech aside) by consistently stepping up their game on the defensive side of the ball.  They were great on standard downs, great on passing downs, great against the run, great against the pass ... in a lot of ways, the 2009 OU defense was almost as good as the 2008 OU offense.  They did not rush the passer as well as previous Stoops defenses, but that was the only chink in the armor ... and they still did it pretty well.

Aside from a glitch here and there (not enough sacks in 2006, too many big plays allowed in 2007), Oklahoma's defense has been consistently great over the last five years (and during the entire Bob Stoops regime, really).  They leverage teams into passing downs better than anybody, and they were one of the first teams to get a great read of how to defend the spread offense.  They occasionally suffer hiccups in that regard, usually in Lubbock, but they are fast, mean, dangerous, and have a great sense of when to move to a higher level.

Really, it's harder to analyze a unit like this, which has been consistently great, than it is a team with distinct strengths and weaknesses, or historically up-and-down play.  OU's defense is awesome ... always has been, and almost certainly always will be as long as Bob Stoops is in Norman.

In 2010, Oklahoma will have to replace two starters on the line -- end Auston English, who was OU's most dangerous player in 2007 before injuries nagged him repeatedly over the next two years, and tackle Gerald McCoy, an Oklahoma City product who was selected in the top five of April's NFL Draft.  These would be huge losses for normal teams, and who knows, maybe they will be for this team as well; but the Sooners have consistently produced high-level defensive linemen, and when you can replace stars with former five-star recruits like R.J. Washington and Jamarkus McFarland, it makes the transition usually go rather smoothly.

The strength of this unit in recent years has been, quite simply, speed.  When he was healthy, Auston English was almost as effective dropping into pass coverage as he was attacking the quarterback.  When you've got excess speed at your disposal, you can vary your coverages and blitzes, get in a quarterback's head, and start forcing dumb decisions.  Nobody got to Chase Daniel more than the OU defense.  They have created the prototype for defending the spread offense -- more speed, varied blitzing, allow the sideline-to-sideline stuff while avoiding getting burned deep -- only, few teams can find the speed-and-size combination to make it work like OU has.

If there is a point of vulnerability here, it is that Gerald McCoy was at times a one-man run-stopping machine.  His statistics were never crazy like those of Ndamukong Suh, but he occupied so many blockers and blew up holes/pockets so well that other players were able to make easy plays.  There's always a chance that his presence isn't totally understood until he has departed.  Jamarkus McFarland was an all-world recruit, but with McCoy wrecking shop, he didn't get many opportunities to make plays his first season.  Now's his chance to prove why he was seen as a blue-chipper.

Teams like Miami and Texas Tech showed last year that you can at least move the ball a little bit if you stay patient, take what's given, and keep the Sooner defense off balance by feeding them a steady balance of the run and pass.  Of course, a) that goes for just about any defense, and b) that is easier said than done.  To make noise against the Sooner defense, Mizzou will need to stay patient, get the crowd behind them, and probably take advantage of a couple of big plays by the Mizzou defense to give them good field position.

While the Sooner defensive line makes plenty of plays along the way, their primary job is to open up the field for their always-devastating (when healthy) linebacking corps.  Oklahoma always has great linebackers, with a middle linebacker who is always in the right position and outside linebackers that swarm to the ball like safeties.  OU must replace two starters in this unit this year -- Ryan Reynolds and Keenan Clayton -- but nobody seems to be too worried.  Ronnell Lewis was Sean Weatherspoon-like in his freshman audition, and it is roundly accepted that he should slide into Clayton's starting role with no problem.

If this unit is vulnerable in any way, it's because they could be starting a redshirt freshman at middle linebacker.  Tom Wort was one of many Mizzou targets who ended up in Norman -- he was in line for playing time as a true freshman last season before tearing up his knee.  He is 100%, and he is expected to either split time with Austin Box or supplant Box entirely.  Reynolds was one of the smartest linebackers OU has had, never found out of position, and you could make the case that his absence will be felt more than the statistics may suggest.  Still, though ... this will always be a damn solid unit.

Sorry. I should have found a different pic.

While Oklahoma has always had a good pass defense, it has gotten consistently better in recent years.  Bobby Jack Wright proved himself a helluva DBs coach, but now the defensive co-coordinator takes over the defensive ends while former Georgia defensive coordinator Willie Martinez joins Bob Stoops' staff and takes over the secondary.  Last year, OU had to replace two very good starting safeties and got even better.  This year will be an interesting test: not only is a new unit coach taking over, but he will have to work with two new starting cornerbacks.  Gone are Dominique Franks and Brian Jackson; in their place are likely starters Jonathan Nelson, who started three games last year and won honorable mention all-conference status as a backup, and Demontre Hurst, who had an outstanding spring.  If these two are able to provide immediate quality at corner, the pass defense will likely be just as good as ever. And if they don't, a wealth of four-star youngsters await their chance to move up the depth chart.

Beal and Alexander should provide a strong pass rush, and it's not out of the realm of possibility that, as long as Martinez doesn't bring with him some bad mojo from last year's Georgia defense, OU's pass defense will remain in the Top Ten of the S&P+ rankings.

It should also be noted here that the Sooners have one of the most high-quality people in the league at free safety.  Quinton Carter is both a badass and the founder of his very own nonprofit organization -- everybody should read this recent Daily Oklahoman profile of him.

In one specific area, Oklahoma should give Mizzou hope.  In just one season, the Sooners shored up what was an egregiously terrible kickoff coverage unit and flipped it into the Top 20.  Improvement like that could help Mizzou immensely.

As a whole, despite only average place-kicking and kick returns, the Sooner special teams unit was still a reasonable strength.  Tress Way was a revelation as a freshman punter, giving OU an even better Net Punting average than Mizzou, and Ryan Broyles is terrifying at punt return.  Jimmy Stevens wasn't asked to do much beyond his capabilities, but between Patrick O'Hara and him, OU should at least find competency at place-kicking.  If the Sooners can find somebody to either drive or supplant Mossis Madu at kick returner (there are plenty of solid incoming athletes from which to choose), OU could compete with Nebraska for the conference's best special teams unit.

Anytime you have to replace six high-quality starters, it is never a given that the new guys will be able to take the reins without at least a temporary step backwards.  But OU has been replacing high-quality starters for years, and they rarely if ever slide.  If the question marks at defensive tackle, middle linebacker and cornerback become happy exclamation points, then this defense will be as good as ever.  And as maligned as Willie Martinez was at Georgia, you still have to think a guy of his experience can only bring positive things to a unit that was so strong already.

With Beal and Alexander on the line, Lewis and Lewis at linebacker, and Carter and Nelson/Hurst in the secondary, star power abounds once again.  You can move the ball on this defense is you play mistake-free and smart. Mizzou will have to play at an A+ level to get the job done, but in the middle of a huge four-game gauntlet (@ATM, OU, @NU, @Tech), will they be able to do so?