Where I Come From: My All-Time Favorite Mizzou Team

Share All sharing options for: Where I Come From: My All-Time Favorite Mizzou Team

This post is sponsored by EA Sports NCAA Football 2011.

Is this one much of a debate for young ones like me?
Now, before I begin, I implore you readers (especially ones who have followed the program much longer than I have) to please tell the tales of Mizzou teams past. Spin me a story about 1960. Tell me why 1978 had so much personality. Make the argument why 1997 can't be topped for the sheer ecstasy of the return to relevance. The beauty of the "my favorite" arguments is this: Everyone is right.
However, I feel comfortable in assuming that the majority of our readers and the majority of the fan base will have no qualms when I tell you that 2007 Mizzou Tigers were my favorite Mizzou football team. Why? Let us count but a mere fraction of thy ways:

And, for some reason, I feel like I'm forgetting something.... 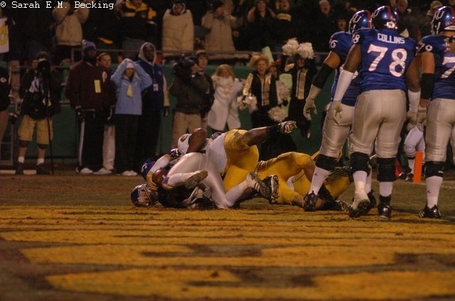 "HIT IN THE ENDZONNNNNE.... SAFETY! BALLGAME! BINGO! MIZZOU.... IS GONNA KNOCK OFF ITS ARCHRIVAL!"