Devil's Advocate: Will Missouri be 5-0 headed to College Station?

Share All sharing options for: Devil's Advocate: Will Missouri be 5-0 headed to College Station?

Here at Rock M Nation, we pride ourselves in trying to avoid/fight the mob mentality that dominates The Interwebs. All those months of skepticism at RMN about lines of thinking that are a little too easily accepted for our tastes have led me to an unintended fondness for contrarianism. Contrarian pieces on SB Nation are nothing new (the inestimable T. Kyle King penned a fantastic series titled Kyle Gets Contrary for Dawg Sports). But this summer, I'm launching a series titled "Devil's Advocate" in which, regardless of my own personal beliefs, I'll attempt to challenge some of Missouri fans' most commonly-held beliefs. Today's truth to challenge:

"Missouri will be 5-0 headed to College Station"

First year Gary Pinkel couldn't exactly be faulted for losing to the Jeff Smoker/TJ Duckett Michigan State team. And, retrospectively, the Urban Meyer teams at Bowling Green were far more formidable than Missouri fans were willing to admit at the time. But even for the notoriously volatile 2004 and 2005 teams, those Troy and New Mexico losses still carry their own stain of disappointment.

Perhaps most noticeable from this list of opponents is that Missouri hasn't fallen to a team with a losing record in non-conference play in Pinkel's tenure. Now, if Mizzou was to fall in non-conference in 2010, which bit of conventional wisdom is going to break? Will Missouri finally fall to a team that ends the season with a losing record? Or does one school out of the Illinois/San Diego State/Miami trio have the juice to get back over .500? Or can McNeese State pull off the first non-1A win against Missouri since Truman State beat the Tigers 26-6 in 1933?

Even though I'm practically neutering my argument, the answer is that non of those possibilities are likely. But the fallacy is in believing that they're impossible.

Illinois continues its run as one of the BCS' biggest enigmatic ticking time bombs, and as much fun as we have at Ron Zook's expense, is it really out of the realm of possibility that Illinois comes to St. Louis ready to play?

Tiger fans are quick to write off the 2010 Illini. After all, who can expect a redshirt freshman quarterback to carry a team to victory in the Arch Rivalry? There's no precedent for that, right? Ahem: 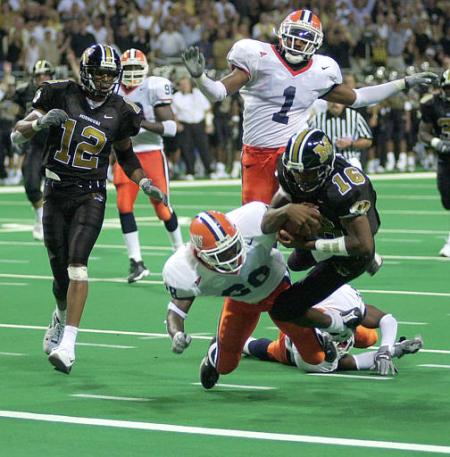 Of course, don't count me as campaigning the "Nathan Scheelhaase is Brad Smith" meme, but just like Blaine Gabbert entered the 2009 Arch Rivalry as a complete unknown, so does Illinois' new triggerman in 2010.

So, even if Missouri takes care of business in St. Louis and at home to skate through non-conference at 4-0, are Missouri fans ready to completely write off Colorado's trip to Faurot Field to open Big 12 play? While no one has loved Mizzou's statistical dominance of Colorado during the last four seasons more than Rock M Nation, is a win over the Buffs supposed to simply be a given? Is it Gary Pinkel's 4-4 record in conference openers at Missouri that has you so confident?

Missouri fans are a confident bunch for supporters of a team that beat Bowling Green almost in spite of itself in the home opener a year ago. 5-0 en route to College Station in 2010 may seem like a birthright and a given, but since when has Missouri football ever played to a storybook script?

Question for discussion: If you had to pick a game to be most worried about, which one would it be?