I should probably immediately remind you of one thing regarding this countdown: this was intended to be a ranking of MIzzou's best teams, not Mizzou's best seasons.  On average, a team that posted the numbers that the 1962 Mizzou team did, would have either won the national title or come very close.  They went just 8-1-2, making them a surprise choice for No. 1 (to say the least), but what the ratings are saying is, if each team in Mizzou's history played 1000 games, the 1962 team would have won the most.  With a sample size of 11, it did not quite work out that way.

If you choose not to believe that the 1962 team was Mizzou's best, I don't think anybody here will tell you that you are crazy.  The 1960, 1969, and 2007 are generally believed to have been better, and it's hard to disagree with any of those choices.  But below, I will attempt to make the case for the 1962 team.  If you are not swayed, so be it.  I'm not completely sure that I'm swayed. 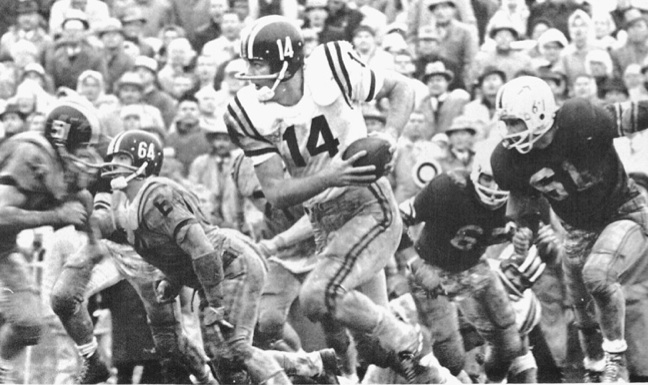 Was the 1962 Mizzou team the best in Mizzou's history?  Maybe, maybe not.  But they were potentially the most Mizzou-ish team ever.  Everything Mizzou fans were raised to love -- power running, rugged defense, brute strength and physicality -- this team produced in droves.  (So yes, go ahead and blame this team for Mizzou fans' reluctance to accept the spread offense if you like.)  They were both physical and explosive, mean and finessed, willing to run past you on a fast track or through you in the slop.  They were a couple of breaks away from making as much noise as any Mizzou team ever has, and they should be remembered and referenced as such.

How does a team with what basically constitutes three blemishes end up the No. 1 team the program has ever produced?  With an absolutely murderous defense, that's how.  Below are Mizzou's 11 opponents from 1962, their average offensive output for the season, and their output against Mizzou:

An average defense would have given up approximately 187.2 points against Mizzou's opponents.  Mizzou gave up 62.  This was a devastating unit that allowed Dan Devine to play things extremely close to the vest on offense.  While the defense was as good as Mizzou has ever had, the offense was beyond basic.  When I interviewed Charlie Flowers, the captain of the 1959 Ole Miss team, in connection with my naming that team No. 1 of all-time at Football Outsiders, he said that their defense was so good (they did not allow a scoring drive of longer than 10 yards all season) that they didn't even have to try to open up the playbook.  In many ways, 1962 Mizzou was the same way.  They put a mauler at quarterback (Jim Johnson, known almost 50 years later as one of the greatest defensive coordinators of all-time), handed off to an explosive sophomore, and averaged under 30 passing yards per game.  And they were still basically two field goals from a 10-1 season.

While the season itself was a couple of what-ifs away from greatness, two of the more interesting what-ifs in Mizzou history came together during the 1962 season as well.  We should explore these for a moment.

What If #1: Don Faurot almost chose Bob Devaney instead of Dan Devine.

As Bob Broeg revealed in Ol' Mizzou, when Don Faurot was looking to replace Frank Broyles after the 1957 season, he narrowed the search down to a couple of deserving candidates: Arizona State's Dan Devine and Wyoming's Bob Devaney.  He chose Devine, and that certainly worked out just fine for Mizzou, but ... what a "What If..." that is.  Devaney would end up coaching five seasons in Laramie, going 31-7-2 over the last four, and he would be hired by Nebraska at the end of the 1961 campaign.  The Huskers' program was in a death spiral.  They hadn't had a winning season since 1954, and they hadn't scored even 100 points in a season since 1956.  I'm sure this was still considered a big-time job -- NU had certainly staked a claim to being the best non-Big Ten program in the midwest through the 1920s, and they had remained relevant through the 1930s and 1940s.  Plus, though the fanbase was surely demoralized and unmotivated at the end of 1961, they were surely still seen as a strong commodity for building a big-time program.  And when I say Devaney immediately resurrected the program, I mean immediately.  NU went 9-2 in 1962 (they had won just 7 games in 1960-61 combined), and Devaney would win 102 games and portions of two national titles in just 11 years in Lincoln.

So what would have happened had he come to Columbia instead?  Would he have experienced the same success?  Would he have established Mizzou as the Big 8's primary power opposite Oklahoma (like Devine basically did) and hand off the reins to Tom Osborne in the early-'70s?  How much of Devaney's success was due to Devaney, and how much was due to the foundation he inherited in Lincoln?  Is it possible that Devine was the wrong hire?

And perhaps most importantly ... when the Nebraska job came open in early-1962, would Devaney have left Mizzou for Lincoln anyway?  Would Mizzou have been looking to hire again that winter?  If so, would Arkansas assistant Hayden Fry, hired away that winter by SMU, have been an option?  Maybe Charlie Bradshaw, chief assistant to Bear Bryant?  We typically view history as set-in-stone ... things happened because that's how they were supposed to happen.  We rarely think of how close we may have come to a completely alternate history.

What If #2: Johnny Roland originally signed with Oklahoma.

In the 1960s, letters of intent were not binding.  Thank goodness, because if they were, a certain member of the Corpus Christi Class of '61 would have ended up a Sooner instead of a Tiger.  Johnny Roland initially signed with Oklahoma before later experiencing a change of heart.  From Broeg's Ol' Mizzou:

"I changed my mind," said Roland, "because I thought that, as a black man, I might have a better future after my college career in one of the big Missouri cities of St. Louis or Kansas City than I would have in Oklahoman. And I found that Coach Devine had good rapport with black people."

Simply put, as a sophomore Roland was the Missouri offense.  He would end up playing All-American caliber football at both defensive back and running back for Mizzou, and he is one of the Tigers' all-time greats.  Neither the 1962 nor 1965 seasons would have been anywhere near as successful without him. 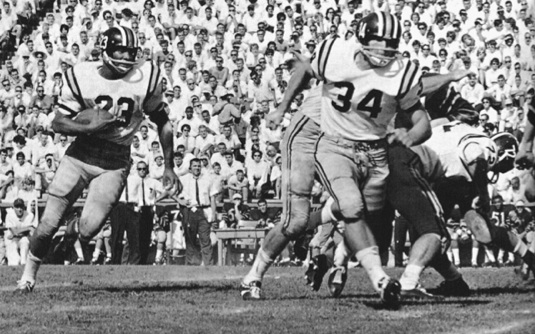 The 1961 season had been a rather successful one for Mizzou considering the amount of talent they had lost from the 1960 club.  The team was made up almost completely of Devine recruits by this point, and Mizzou went 7-2-1 despite lackluster offensive play.  They averaged just 12.4 points per game, but they allowed just 5.7, and they turned down a Bluebonnet Bowl bid to end the season.  They began 1962 on the cusp of the AP Top 10 (for whatever reason, the AP only voted for 10 teams that season), but they still had quite a few question marks on the offensive side of the ball.  Of course, Johnny Roland was the answer to most of those questions, but he couldn't pass (at least, not much).  When necessary (which was rare), those duties would be left to Jim Johnson.

Mizzou began 1962 with a trip to Berkeley to take on a Cal team coached by, of all people, Marv Levy.  Despite a coaching staff that included a young Bill Walsh, Levy never really found success at Cal.  They had gone just 1-8-1 in 1961, and though they put up a fight for a while against Mizzou, they were eventually overtaken.  Loading up against the run, the Golden Bears took a 10-7 lead into halftime.  Mizzou muffed a punt at their own 4, setting up an extremely short TD drive.  But by the third quarter, Mizzou was taking over.  Roland gave Mizzou a lead they wouldn't relinquish with a 58-yard "Hello, world" touchdown run.  Mizzou went on a 71-yard touchdown drive to clinch the game in the fourth quarter.  Fullback Paul Underhill did most of the dirty work on that drive, and Roland caught a 7-yard touchdown reception, his third score in his first varsity game, to wrap up a 21-10 Mizzou win.

The next week, No. 10 Mizzou headed to Minneapolis to take on the national power that was the Minnesota Golden Gophers, in front of 60,000 clad in maroon and gold.  Under Murray Warmath, the Gophers were surging back to the top of the college football heap.  They had won a (much disputed) national title in 1960, and they were coming off of an easy Rose Bowl win in 1961.  The Gophers and Tigers played similar physical styles, and the 1962 battle was an absolute bloodbath ... everywhere but on the scoreboard, anyway.

In the first half, Minnesota dominated the proceedings.  Twice, they drove deep into Mizzou territory, but Dan Devine's stout defense held.  On fourth-and-goal from the Mizzou 3, Jim Vermillion and Gus Otto took down Minnesota's Bill Muncey.  Then, in the second quarter, Jim Johnson and John Sevcik stopped a fourth-and-goal rollout from the 2.  Minnesota was controlling the game, but the score was tied at 0-0 at halftime.  The second half was all Mizzou, but the score remained tied.  Johnson found end Bill Tobin for a 55-yard bomb, but he was barely tripped up at the Minnesota 30.  Three plays later, Mizzou narrowly missed a 38-yard field goal.  Then, with under two minutes remaining, Mizzou's Carl Crawford returned a punt to the Minnesota 48.  A 15-yard personal foul penalty got Mizzou within field goal range, but a Johnson pass was intercepted, and the game finished a scoreless tie.  It was a result that was unfair to both sides, as neither had given an inch, and both had produced just enough offense to feel they had earned a win.

Despite the decent road result, Mizzou fell from their tenth-ranked perch following the trip to Minnesota, and they returned to Columbia for their home opener against Arizona.  A crowd of 42,000 -- the most ever for a season-opener at increasingly football-crazy Mizzou -- welcomed the Tigers, who didn't wait long to put the game out of reach.  Jack Palmer recovered a fumble at the Arizona 22, Mizzou unleashed Power Football 101 for an early lead.  Bill Tobin powered ahead for eight yards, then Vince Tobin tossed to Johnny Roland for seven.  Paul Underhill then plowed in for the touchdown and a 7-0 lead.  Later in the quarter, Roland broke off a 28-yard run to the Arizona 18.  Underhill carried tacklers for 12 yards to the six, then Roland found George Seals on a halfback pass for the touchdown.  Mizzou tacked on a field goal in the second quarter, headed to the locker rooms with a 17-0 lead, and played keepaway in the second half on the way to an easy 17-7 win.  End Conrad Hitchler piled up a series of tackles for loss, and Arizona finally scored late against the backups.

Heading into conference play, Mizzou was once again on the doorstep of the Top Ten, with a 2-0-1 performance that had both emphasized their defensive prowess and hinted at some offensive explosiveness.

Tomorrow, we take a look at how the rest of the season played out.