Part One: Pinkel vs Mizzou History 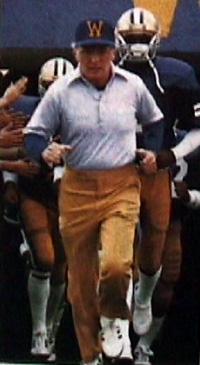 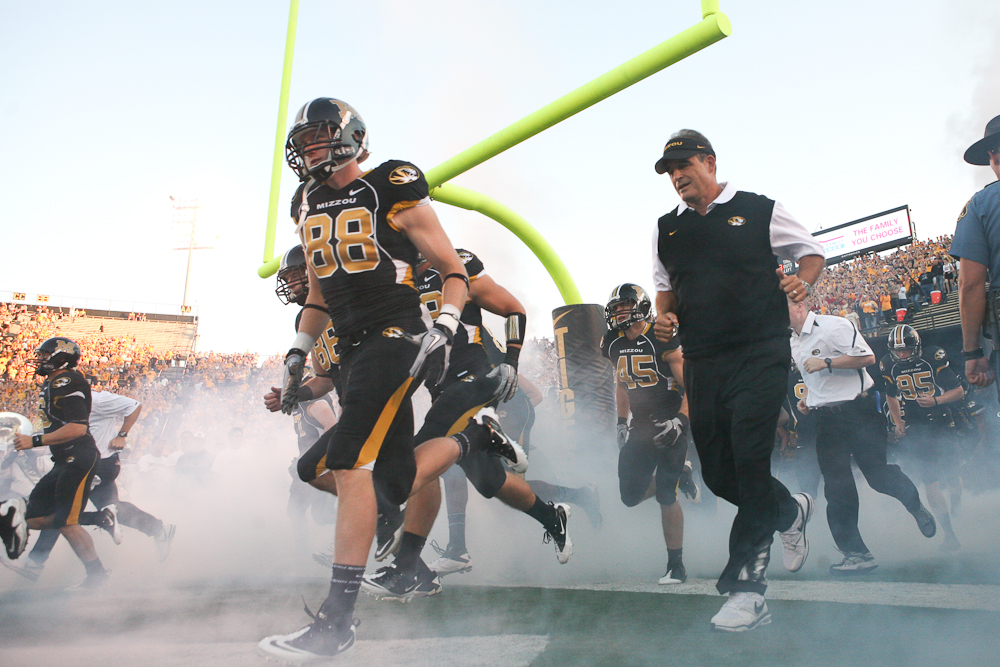 Photos via CoachWyatt.com and Bill Carter

On Monday, we looked at Gary Pinkel's recent performance as Missouri head coach to other semi-sustained strings of success.  Today, we compare his track record to that of his mentor, Don James.

Mike Alden has built the Missouri athletic program around loyalty and long-term goals.  Almost every coach he has hired has reflected these traits both before and after their move to black and gold, and nobody has more visibly done so than Gary Pinkel.  Knowing what we know now about Alden's hiring practices, it makes sense that he would have been incredibly enamored by the coach who a) spent 14 years as Don James' assistant, working his way up from Kent State graduate assistant, to Washington tight ends coach, to wide receiver coach, to offensive coordinator, and b) then spent 10 years as Toledo head coach despite seeing enough success to jump at earlier opportunities.

Pinkel was taught to be pragmatic and unwavering from the long-term, and he has built the Mizzou program on those principles.  Even his flaws have these principles in mind.  I have long been of the mind that the same aspects of your personality that give you your best qualities also give you your worst, and Pinkel is no exception.  In his dedication to long-term goals and brick-by-brick program building, he has made short-term mistakes.  Nobody can question his program-building ability, but plenty have questioned his moment-to-moment in-game coaching.  It makes sense, and for the Missouri program, it is much, much better than the alternative.

Pinkel has so heavily referred to and relied upon the lessons he learned from Don James that, ten years into his tenure as Missouri coach, it is more than fair to compare the overall performance of the pupil to the master.  We'll start with the basics.  Here is a chart looking at both coaches' three-year moving averages in terms of the same Est. S&P+ percentile performances we used for part one.  The first data points on the graph show the three-year level of performance before each coach arrived, the second looks at the averages for years 1-3, then 2-4, etc. 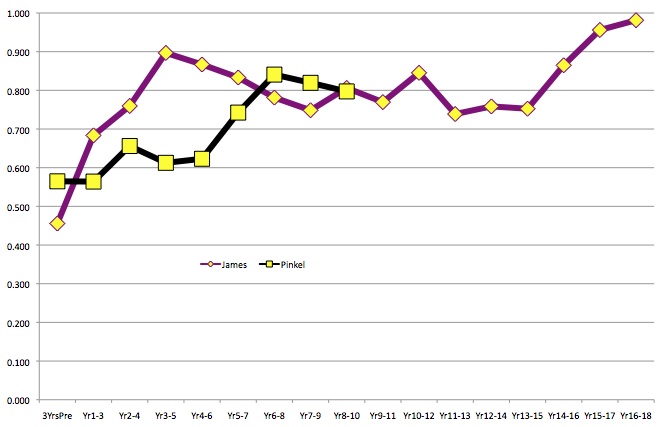 Using three-year history for the first data point does Pinkel no favors, since it includes the 1998 season, but alas.  Mizzou was sub-.350 in both 1999 and 2000, however, so depending on your data set, Mizzou was in either a bit better shape than what James inherited at Washington, or a bit worse.

Regardless, what this table tells us is that James started out quite a bit faster than Pinkel (I'm sure we could have an interesting discussion as to why that was the case), but Pinkel surpassed him in what one could call the second or third 'cycle' of recruits.  Their Year 8-10 averages are virtually identical.  And considering James eventually won a national title at Washington, clearly there are worse things than being on track with him.

One thing to note: we've discussed it before, but James entered a rather stagnant period in the mid- to late-1980s.  The Huskies almost won the national title in 1984, then went 7-5, 8-3-1, 7-4-1, 6-5 and 8-4 over the next five seasons (years 11-15 on the above chart).  As we see from the chart, that was good for an average percentile performance of .700 to .800, or between about No. 24 and No. 36 in a given season.  When you are relying on the "each cycle of recruits is better than the last" approach to building an elite program -- and unless you are at a school that has been a national power for 50 years, you really don't have a choice but to take this approach -- sometimes you either misjudge talent, or their chemistry is off, or you just sign what turns out to be a dud class or two.  Or, the next in your long line of golden-boy quarterbacks just isn't quite as golden as the last few have been.  But we'll come back to that idea in a bit.

Over the long haul, all you can do is keep grinding out winning seasons and hope the next batch of recruits is more successful.  For Washington, it was much more successful.  In James' final three seasons, Washington went 31-5, going undefeated and winning the national title in 1991 (year 17).  I assume there was some "He's plateaued!!!" talk around Washington fan circles, but ignoring such talk paid off for the Univ. of Washington.  If they hadn't been as dedicated to the long-term as James himself, the relationship may not have seen the high points it ended up experiencing.

So now let's do a little overlay.  The jumbled-up graph below shows us the same data as above, only with past Missouri coaches' data as well.  The point isn't to closely track how each Missouri coach did -- the point is to compare Mizzou's previously-defined "ceiling" with that of James and Washington.

Three-Year Moving Averages (According to Est. S&P+ Percentile Performance)
for Don James. Gary Pinkel and most Missouri coaches of the last 75 years. 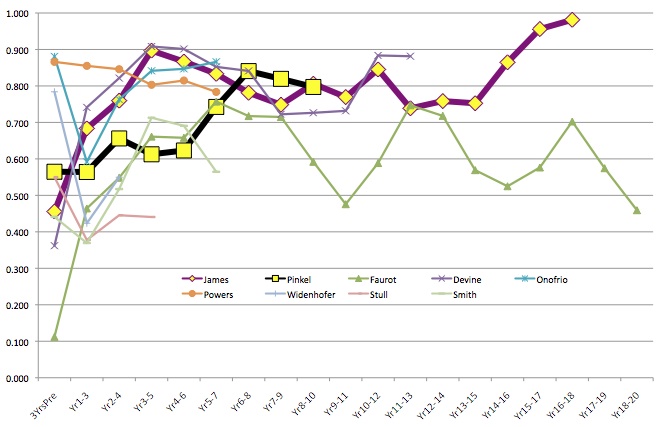 What we see here is that James' and Dan Devine's tenures mirrored each other's to a certain degree; it would have been even more closely-matched had I added Devine's Notre Dame data.  Both James and Devine peaked 20 years into their major coaching careers; the problem, of course, was that Devine's career peaked with a national title at a different school (Notre Dame).

(What we also see is that, while coaches like Al Onofrio and Warren Powers started with Mizzou in a much better place, Pinkel has built Mizzou back up, not only to those levels, but past those levels.)

James' tenure is both a sign of optimism for Pinkel's and a cautionary tale.  First: this is definitive proof that a coach can seemingly "plateau" in terms of overall success, then still find another gear.  (Joe Paterno's multiple-plateau, multiple-peak career is a sure sign of that too.)  If you are running your program as it should be run, the long-term is typically pretty kind to you.  At the same time, it bears mentioning that James' late-career peak was aided, or at least followed, by booster shenanigans.  Washington's overall talent skyrocketed in the early-1990s, and a few years later, they got their wrists slapped by the NCAA.  Not saying there is a causal relationship here (there's no proof that anybody signed with Washington because of said shenanigans); it is just something worth acknowledging.

As always, comparing a protege to his mentor is imperfect.  It's good for trend-spotting, but really, Pinkel and James come from different backgrounds.  Or at least, different sides of the ball.  James was the defensive coordinator at Florida State, Michigan and Colorado before getting the Kent State and, eventually, Washington head coaching jobs.  Meanwhile, Pinkel's background comes from the offense.  He was James' offensive coordinator from 1984-90, leaving just before Washington's national title run (naturally ... since "Mizzou" and "national title" can't go together in any way, shape or form).  Consequently, Mizzou's offenses have tended to perform at a higher level than James' Washington offenses, something that might come as a surprise considering both where Mizzou was when Pinkel took over, and who Washington had at quarterback during James' tenure.  Warren Moon, Steve Pelluer, Hugh Millen, Chris Chandler, Mark Brunell and Billy Joe Hobert had at least a cup of coffee in the NFL.  A few of them had solid (or better) careers.

Below is a table of each Washington quarterback under James, from his first year at Washington through the 1991 national title season.  The average in each column represents Washington's offensive Est. S&P+ performance (according to the same percentiles we have been using for other parts of this series).  (

For James and Washington, the quarterbacking talent was strong, but it didn't necessarily tell the full story of the Huskies' success.  For one thing, Washington quarterbacks often had their most success in the quarterback's first year as starter.  Flick, Millen, and Chandler all saw better results in Year One than Year two.  We've read a lot about the long line of pro quarterbacks Pinkel coached at Washington, but they certainly didn't make or break the Washington offense.  At least, not until ageless Mark Brunell took over.

For Mizzou, it has been a little different.

Mizzou's offensive performance has been more directly tied to both the level of experience of the quarterback (at least, whether he is a first- or multi-year starter -- there isn't much of a trend from years 2-4) and the overall success of the team.  Whereas Steve Pelluer won big at Washington despite only a decent offense, while Cary Conklin led a better offense to a worse record, Missouri's success has been dictated by their offensive success.  Again, Pinkel is an offensive coach, so this make a bit of sense.

James' success was tied closely to his defense.  Here's the same look at moving averages for James and Pinkel, looking only at defense this time. 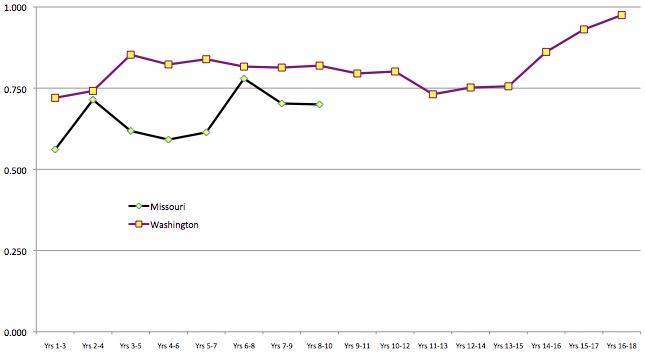 Predictably, James' defenses were better than Pinkel's have been.  Their backgrounds would dictate such a thing.  (Granted, Mizzou's most highly-rated defense -- 2007's -- happened to play for Pinkel's best overall team, but we're talking about overall trends here.)  And you can see that their late-1980s funk coincided with a dip into the .750 percentile or so.  James' worst moving averages were only a hair worse than Pinkel's best have been, but Washington's record suffered anytime their defensive performance dipped even to just good levels.  When the Steve Emtman's and Chico Fraley's of the world started signing with U-Dub in the late-1980s, Washington became elite again.  Very, very elite.

(By the way, fun fact: Ed Cunningham, now-former broadcast partner with King Ron Franklin and scourge of all Nebraska fans, was a lineman on Washington's '91 title team, meaning he was coached by Pinkel at one point before Pinkel left for Toledo.  I had no idea.)

So what was the general point of this?  Curiosity, basically.  We can only glean so much from comparing Gary Pinkel to Don James, but what we can conclude is certainly encouraging.  They both have their own styles and preferences, but Pinkel certainly learned a lot of his long-term tendencies from Coach James, and to date, he has caught up to the master in terms of program success.  James' late-1980s stretch shows that a coach like Pinkel, with plenty of support from the athletic department and a tendency toward avoiding panic, can survive a mediocre 'cycle' of recruits and still thrive later on. Though with improved recruiting and depth already taking hold, hopefully we won't have to worry about such a down cycle anytime soon.