Animated Drive Chart brought to you by Gameday Depot.

It came through a lot of fits and starts (and more fits), but over time I have learned to become what I feel is a semi-healthy sports fan. I try as hard as I can to latch onto the positive as long as possible and move past the negative as quickly as possible. It is the personality I tried to bring to Rock M Nation, and while it can sometimes be a bit annoying -- sometimes people just want to vent and don't want to be tut-tutted for lashing out -- I feel good about it as a whole.

Predictably, then, I was already trying to move on from yesterday's game as soon as it began to look like a loss. I reminded myself that Mizzou finishes with two home games and Kansas, so falling to 3-5 would not be the end of the world when it comes to bowl eligibility. I reminded myself that bad timing is bad timing -- Mizzou chose a really bad year to only be a Top 40-45 team considering seemingly every opponent was of Top 25-30 caliber. I reminded myself, as well, that Mizzou was Top 40-45 in 2009, too, that 2010 worked out pretty well, and that even if somehow the season ended at 5-7 or so, good things could still happen in 2012. (See? I do all these things to myself before I inflict it on others.) I was more or less at peace with another gut-wrenching loss.

Then, an hour or two later, I was reminded just how damn good winning feels. Defense mechanisms have their place, and I've got a lot of them, but I didn't become a sports fan because I was good at consoling myself (though when you think about the teams I tend to root for, this has become a nice skill to have); I became a fan because of results like yesterday's. I became a fan because of the times I just get to send The Beef an e-mail that simply says "Well holy crap."

Similarly, players don't play this sport with "we might still be pretty good next year" in mind. They play to win now.

@Dave_Matter
Dave Matter Easily the most emotional I've seen #mizzou players and coaches in a long time. Saw some tears on the field, lots of relief
Oct 29 via UberSocial for BlackBerryFavoriteRetweetReply

@Dave_Matter
Dave Matter Easily the most animated I've seen Pinkel after a game in a while, sensed serious relief from the coach, for obvious reasons
Oct 29 via webFavoriteRetweetReply

In the post-game TV interview, Gary Pinkel was trying as hard as he could not to blubber on camera. The pictures I pulled from Getty this morning are almost all of pure joy. It clearly meant so much to this team to prove they could both bounce back from disappointment and learn how to win. This a team loaded with underclassmen -- especially sophomores -- and they play like it sometimes. They are battling both inexperience and doubt. They held together, got contributions from youngsters (James Franklin, Henry Josey, Marcus Lucas, E.J. Gaines, Randy Ponder, Eric Waters, Brayden Burnett) and seniors (Jacquies Smith, Dominique Hamilton) alike, and won a game that may have turned around their season.

If you keep busting your tail, good things sometimes happen. The offensive line was dominated early and dominant late. James Franklin was inaccurate early, as accurate as he has ever been late. The pass rush was nonexistent early, but then Brad Madison hit Ryan Tannehill on a pass intercepted by Randy Ponder, and Jacquies Smith stripped Tannehill as A&M was driving for a game-winning field goal attempt, and Dominique Hamilton batted down the game's final pass. Mizzou just kept ratcheting up the pressure, and an A&M team that has (obviously) shown signs of second-half weakness, began to crack. Early struggle led to mid-game resourcefulness led to late-game play-making. There is no script for a win that plays out in more rewarding fashion than that one.

Next week, if Missouri loses to Baylor, the defense mechanisms will be back in place, and I will remain a somewhat healthy individual because of them. But it feels great to be able to take those walls down for a week. 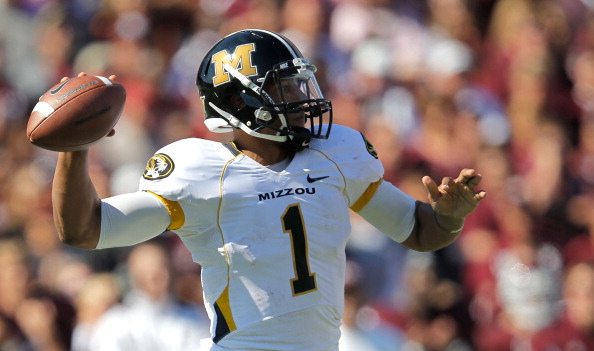 I start to annoy myself after a while when I harp on the same issue too much. It's only fair -- it really annoys me when others do the same. (Like the woman who was shrieking "THROW IT TO EGNEW ALREADY" the entire Oklahoma State game, even when Henry Josey was running the ball.) That said, I can't help myself: good things happen when James Franklin throws to Marcus Lucas and L'Damian Washington. It isn't all good things, mind you; but here's a stat for you:

In the four games in which Lucas and Washington have combined for at least three catches, James Franklin has completed 80 of 119 passes (67%) for 1,052 yards (8.8 per pass), 10 touchdowns and two interceptions.

In games in which Lucas and Washington combine for two catches or fewer, Franklin has completed 66 of 121 passes (55%) for 818 yards (6.8 per pass), three touchdowns and five interceptions.

Now, is there some noise in this tidbit? Of course. Of the four games in which Lucas and Washington have combined for two catches or fewer, three were against Oklahoma, Oklahoma State and Kansas State, probably the three best defenses Mizzou has faced this year. It isn't exactly revelatory to say that you are going to end up with worse stats against better defenses. But in those three games, Franklin also spent a lot of time looking (in vain) for receivers like Wes Kemp and Jerrell Jackson, who have, by almost any measure, had extremely disappointing 2011 seasons.

The problem, of course, comes with Mizzou's offensive approach in 2011. The Tigers have become a run-heavy team -- yesterday, Franklin ended up with 24 passes and 24 carries -- and Kemp and Jackson (especially Kemp) are two of Missouri's best open-field blockers. You cannot bring Kemp and Jackson in just for runs, then flip to Lucas and Washington just for passes; to say the least, defensive coordinators are smart enough to catch on to that. Plus, Lucas showed he still has room for growth in terms of blocking yesterday; his hold on fourth-and-1 late in the game could have been absolutely devastating. Still, Mizzou has, at times, figured out how to balance each player's strengths, and the result has been sporadically spectacular. Lucas and Washington are both just sophomores (along with what seems like most of Mizzou's most exciting players), and the future is bright for each.

It appeared Henry Josey had picked up a first down on a fourth-and-1 sweep late in the fourth quarter until a flag flew. Wide receiver Marcus Lucas was called for holding. The Tigers had to punt the ball away, and Lucas took a seat on the bench in a funk.

"I had a really crummy first half. I dropped two slants — gimmes right over the middle," wide receiver T.J. Moe said. ... "Marcus was one of those guys that came over and said, ‘It doesn’t matter, you’re going to make the next catch. You’ve done it your whole life.’ He did that, so I went over and said, ‘I’m going to tell you what you told me. It doesn’t matter. You’re going to come up with a huge play.’ I came back and had a third-down conversion at the 10-yard line, and Henry ran in the next play. I said, ‘I came back and did it. It’s your time to come back and do it.’"

On a third-and-6 play in overtime, Lucas lined up wide to the left. And although the pass play called usually goes to the receivers on the opposite side, Lucas had an inkling the ball would come his way when cornerback Dustin Harris crowded him in press coverage. That meant he was supposed to run a "Go" route to the end zone. He did, and Franklin threaded a perfect throw to the left corner of the end zone that the 6-5 Lucas could catch and the 6-0 Harris couldn’t.

"Something our team preaches is park it and refocus," Lucas said. "It’s something we’ve been working on since last year. It’s a mind game in your own head. Good thinking and good thoughts help your performance out there. You want to forget about any bad plays or good plays that have happened in the game and just focus on the play you’re out there." 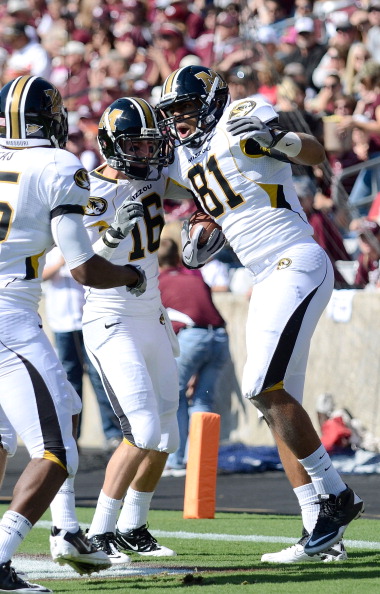 Sophomores, So Many Sophomores

Marcus Lucas caught all five passes targeting him, including the game-winning touchdown.

E.J. Gaines broke up four passes and suddenly looks like he might sneak in and steal an all-conference bid.

Randy Ponder has gone from invisible to interesting to spectacular over the course of two or three weeks.

Tight end Eric Waters made a tough catch despite a lunging defender, then turned and took his second career reception 41 yards for a touchdown and a 14-7 lead.

Andrew Wilson took part in 12 tackles (two solo, 10 assisted) and was occasionally spectacular against the run.

Sheldon Richardson (technically a junior, but supposedly he could possibly be reclassified) had a hand in eight tackles and played a large role in shutting down A&M's up-the-middle running attack.

Brayden Burnett took part in a tackle-for-loss and ably spelled a hobbled Brad Madison in the second half.

Granted, it wasn't only sophomores making plays, but even when the present tense looks pretty nice, it is difficult to avoid getting starry-eyed about the future when this many young players make contributions in a road win over a ranked, experienced team. Whether that future is in the SEC or Big 12, the foundation for what will be the 2012 and 2013 Missouri teams is awfully strong. 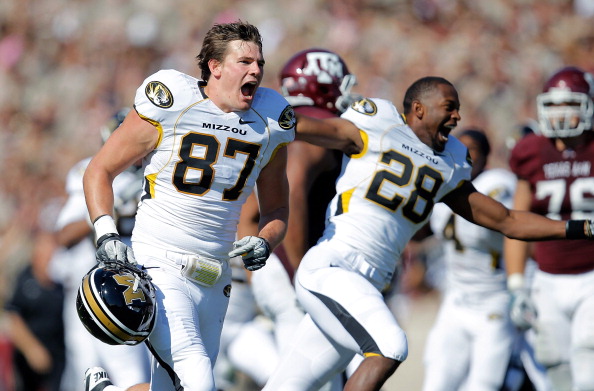