Texas at Missouri: Beyond The Box Score Preview

Share All sharing options for: Texas at Missouri: Beyond The Box Score Preview

NOTE: Confused? See the quick glossary at the bottom.

I told a friend of mine on Sunday that, if the goal was to up the ante for F*** Texas Week, Mizzou certainly started it with a bang on Sunday. But it won't mean much without a win on Saturday morning, eh? 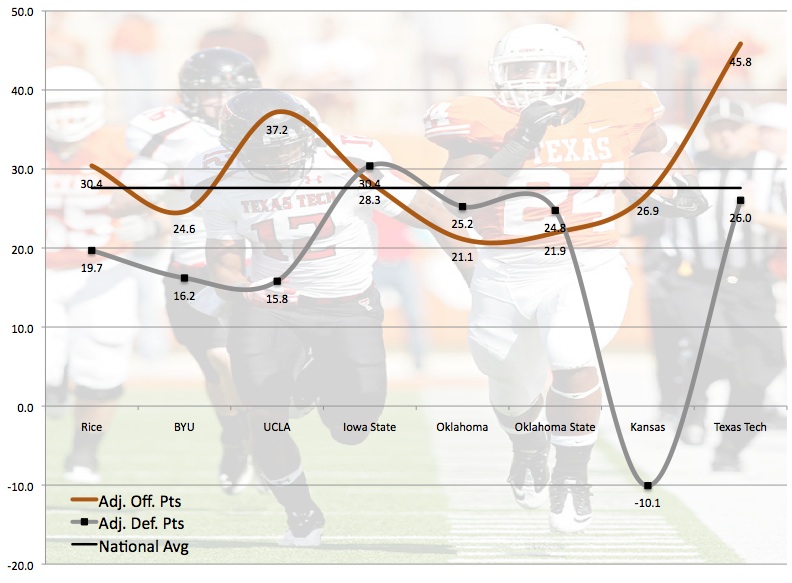 (I also told that same friend that I really wish Missouri had played Texas in September and Oklahoma in November, and not the other way around. Alas.)

Texas and Missouri are two young teams at interesting places in their development. Texas is limited but quickly becoming adept in their one area of offensive proficiency (rushing); their defense, meanwhile, has trended toward average since September, sans one perfect performance versus Kansas. Missouri, on the other hand, has shown more glimpses of great all-around play, but they have rarely put all the pieces together at one time. The teams are developing in different ways, at different rates, and I honestly cannot figure out what I think will happen when they take the field on Saturday. Do home field advantage and a more well-rounded offense swing the game toward Mizzou? Does a still-stellar defense and an improving offense give the edge to the Horns? (Spoiler alert: the numbers really don't know what to do with this game either.)

Gary Pinkel has yet to actually defeat Mack Brown, partially because he has never actually gotten to face any of the more 'down' Texas teams -- the five teams Pinkel has faced have gone a combined 60-5; the five he missed went 46-18; that's a nice tidbit, but as Mizzou gets ready to change conferences, this is Pinkel's last, and best, opportunity.

When Texas Has The Ball…

So it took a while, but Texas has begun to get somewhere in the long, arduous journey toward developing an identity.

In the Longhorns' two best offensive performances of the season -- UCLA and Texas Tech -- they built early leads, ran the ball almost exclusively on standard downs, and played things very conservatively on passing downs. They went up 21-0 on UCLA after 20 minutes, and they led Tech 31-6 at halftime. If you cannot stop their run, and if you make mistakes on offense, they can build some space, and you will not catch up.

If, on the other hand, you can keep them in check for as long as possible, or (better yet) build an early lead yourself, the advantage begins to shift dramatically. Texas can pass as long as they don't have to, but as you see on the Passing Downs table, they are not a team built to play from behind or pull Colt McCoy-esque magic acts on passing downs.

This makes sense, of course. Their starting quarterback (David Ash) is a true freshman. Their two leading rushers (Joe Bergeron and Malcolm Brown)? True freshmen. Leading receiver (Jaxon Shipley)? Yep, true freshman. On the offensive line, they start a redshirt freshman (center Dominic Espinosa), a sophomore (right tackle Trey Hopkins) and a true freshman (left tackle Josh Cochran, an "OR" on the depth chart with senior Tray Allen). This offense is only going to get better in coming years, but they are limited right now. They were all, basically, star recruits -- they are athletic and talented, and the offensive coaching staff can gameplan and figure out interesting ways to use them. They have broken out the Wildcat formation with running back Fozzy Whittaker behind center, for example. However, success in what I call the "play-making downs" comes with seasoning. On the downs where the gameplan goes out the window and you just hope somebody steps up and makes a play, Texas is lacking.

There's no question that the unit is improving, especially in the run game. Over the last three games, Brown, Bergeron and Whittaker have combined for 768 rushing yards (6.6 per carry) and 11 touchdowns. Kansas and Texas Tech were incapable of slowing down the run game, and Oklahoma State was ahead too much to care. When the run game is clicking, then passing lanes begin to open. Shipley (438 yards, 65% catch rate, 8.6 yards per target) and sophomore Mike Davis (490 yards, 60% catch rate, 10.2 yards per target) have been targeted by over half of the season's passes, and both still have plenty of growth remaining -- they average 10.1 and 13.0 yards per target on standard downs, but just 6.8 and 7.4 on passing downs. Track star Marquise Goodwin has become more assimilated as the season progressed (he missed time earlier in the season due to track obligations), but he is still just a secondary target (11 receptions, 61% catch rate, 6.2 yards per target).

(One interesting aspect heading into the game: nobody knows what role Shipley will be able to play after injuring his knee versus Kansas and missing the Tech game. Without Shipley, Texas will lean even more heavily on the run. And for that matter, it will be interesting to see how Texas splits carries; Brown missed last week with turf toe, allowing Bergeron to go off.)

Bottom line: leverage Texas into passing downs, and you probably win. Not only is Texas iffy in that regard, but it is a Mizzou strength. Despite the loss of Braylon Webb, this is a better secondary than what existed a couple of months ago, and unless Texas finds a weapon to exploit the nickel back like Baylor did (Goodwin? Darius White? Fozzy Whittaker?), Mizzou holds a significant advantage if first-and-10 turns into second-and-8 or third-and-6.

When Missouri Has The Ball…

Texas' defense is in many ways simply a better version of Missouri's: unspectacular on standard downs (with a particular weakness versus the pass), devastating on passing downs. Manny Diaz has long been a student of leverage, both how to push offenses toward uncomfortable downs and distances, but also how to align the defense so that the options presented to an offense are the ones they really don't want to take. Mizzou can move the ball if they take what is given to them (not much of a worry) and avoid killer mistakes (a decent-sized worry). Will the Missouri of the Texas A&M and Arizona State games (a steady unit that avoided devastating setbacks) make an appearance? Or will this be more of the Missouri of the Kansas State and Oklahoma State games (effective at times but incapable of avoiding killing themselves)?

For the third consecutive week, Missouri faces a dilemma in terms of their offensive gameplan. They want to run the ball, but opponents are finding it much easier to pass on their opponents. The Horns field a strong front seven, but they do offer you cushions, and the opportunity to be reasonably efficient, through the air. Their top three corners are two sophomores (Carrington Byndum, Adrian Phillps) and a freshman (Quandre Diggs). They have intercepted five passes and broken up an impressive 23 more, but a lot of that (and their 11 tackles for loss) has come when they have been in "Passing Downs! Swarm!" mode. They are a bit more timid on standard downs; that will be the time for Missouri to strike.

If Mizzou finds themselves in passing downs, they are potentially as doomed as Texas' offense is in the same scenario. Texas attacks from anywhere at any time -- ten different regulars have at least two tackles for loss. Ends Jackson Jeffcoat and Alex Okafor have combined for eight sacks and 19 tackles for loss, and the pressure they provide (and the premature passes they cause) has been instrumental in UT's passing downs success.

And yes, there is still an Acho brother roaming from sideline to sideline. Emmanuel Acho (a senior, finally) has racked up 52.5 tackles and 10 tackles for loss, along with 10 quarterback hurries, two sacks and three passes broken up. The rest of the Texas linebacking corps is solid if unspectacular -- Keenan Robinson, sophomore Jordan Hicks and freshman Steve Edmond have combined for 77.0 tackles, but only six tackles for loss -- but looking at the stats, one can rather quickly get a read for how this defense works. The tackles clear the table for Acho and middle linebacker Robinson (46.0 tackles) to make the tackle on anything short, and once they have pushed you into uncomfortable downs and distances, they strike with reckless abandon.

For all intents and purposes, there are five categories of special teams: kickoffs (both teams), punts (both teams) and place-kicking. Mizzou holds the advantage in the punting categories (Justin Tucker is a decent-not-amazing punter, while Jaxon Shipley has yet to do much damage returning punts), and Texas holds the advantage in the kickoffs categories (Tucker has booted nine touchbacks, and Mizzou has yet to produce any consistency at kick returner, plus UT's Fozzy Whittaker has taken two of his 10 kick returns to the house) and place-kicking (Tucker is 11-for-12 on field goals, 3-for-3 from beyond 40 yards). Here's to hoping that if special teams play a role, it is with Trey Barrow booming punts and E.J. Gaines breaking off nice returns.

The numbers give Mizzou the slightest of edges: 0.1 points. In other words, this one is a complete tossup. But by asking two primary questions, you should be able to figure out with decent confidence who is going to win over the first 20 minutes: 1) Does either team take an early lead? Texas is built to maintain a lead but very much not built to make up a deficit. 2) Who is staying in standard downs? If either team faces a few too many third-and-7's early on, they are in trouble, even if they pull out a few conversions.

With such a ridiculously young team, Texas has simplified the script quite a bit this season, and they have been talented enough to get away with it most of the time. How they will perform against a team of Missouri's caliber is unclear, however. In terms of F/+ rankings, they have lost to two Top Five teams (OU, OSU) and beaten five teams ranked 61st or worse. How will they perform, on the road, versus a Missouri team that has spent most of 2011 oscillating between 20th and 40th (they're currently 35th)? For the sake of both Missouri's season and a somewhat unintentional (and elaborate) F*** Texas Week, hopefully the answer is "Not well."

PPP: An explosiveness measure derived from determining the point value of every yard line (based on the expected number of points an offense could expect to score from that yard line) and, therefore, every play of a given game.

S&P+: Think of this as an OPS (the "On-Base Plus Slugging" baseball measure) for football. The 'S' stands for success rates, a common Football Outsiders efficiency measure that basically serves as on-base percentage. The 'P' stands for PPP+, an explosiveness measure that stands for EqPts Per Play. The "+" means it has been adjusted for the level of opponent, obviously a key to any good measure in college football. S&P+ is measured for all non-garbage time plays in a given college football game. Plays are counted within the following criteria: when the score is within 28 points in the first quarter, within 24 points in the second quarter, within 21 points in the third quarter, and within 16 points (i.e. two possession) in the fourth quarter. For more about this measure, visit the main S&P+ page at Football Outsiders.

Success Rate: A common Football Outsiders tool used to measure efficiency by determining whether every play of a given game was successful or not. The terms of success in college football: 50 percent of necessary yardage on first down, 70 percent on second down, and 100 percent on third and fourth down.