Share All sharing options for: Missouri Beats Texas: Beyond The Box Score

Rarely does a defense manage to improve their yardage allowed by 450 yards in a single week, but that's exactly what Mizzou pulled off against a wounded Texas unit. 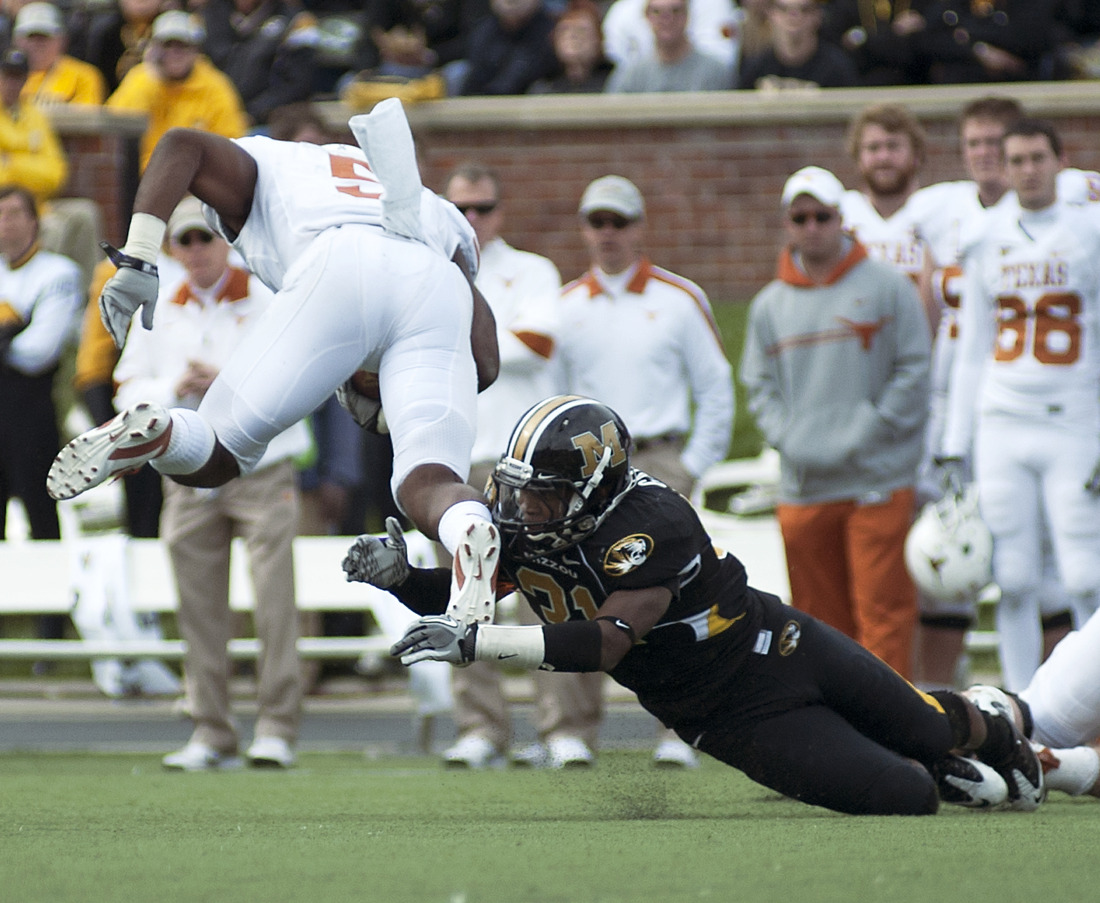 Three games ago, Mizzou virtually shut down Texas A&M's passing attack as the game progressed. They limited Baylor the next week, at least to a degree, until Braylon Webb got hurt and the Bears used Tevin Reese to blow by Mizzou's new nickel back. Against a Texas receiving corps without freshman Jaxon Shipley, however, a strong No. 3 was not a concern. Nor was a strong No. 1 or No. 2, apparently. Marquise Goodwin burned Kip Edwards for 45 yards on third-and-long on the opening drive ... and that was almost all Mizzou allowed. Goodwin and Mike Davis, UT's makeshift No. 1 and No. 2, combined to catch just seven of 18 passes thrown their way. Davis in particular was eaten alive. Yes, part of UT's troubles came because of their inaccurate, true freshman quarterback, and no, Texas' injuries did not help. But this is still a unit with high athletic potential (their original Rivals star ratings are included below, just for effect), and Mizzou handled them well.

The bottom line at this point is, to move the ball against Missouri you need a deep receiving corps, preferably one with a lot of speed. This week's opponent, Texas Tech, obviously utilizes a wealth of receiving options, but they are severely lacking in big-play potential at this point, and if momentum holds, the Red Raiders will not be too capable of burning the Missouri nickel back over the top, whoever that nickel back may be. 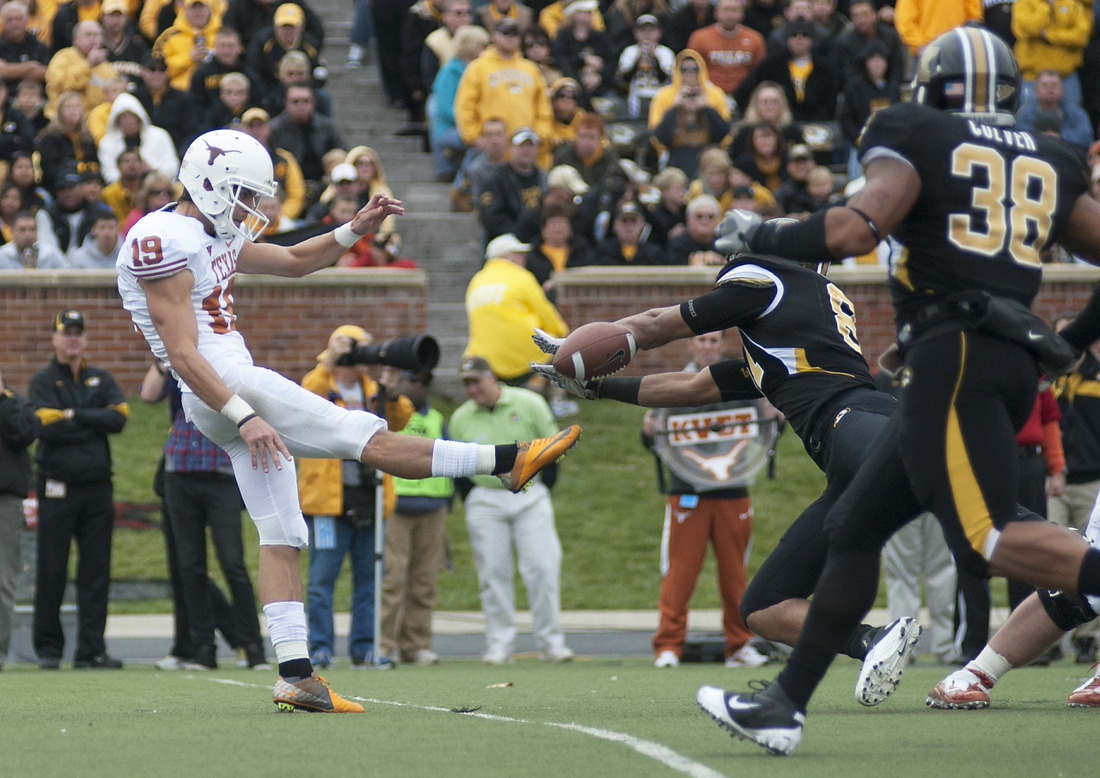 This game caused some 2010 flashbacks. Honestly, the 2010 Iowa State game was the first to come to mind. Mizzou got their points, knew their defense (the line in particular) was holding the fort, was mostly successful in terms of flipping the field and keeping Texas on its own side of the 50, and stopped taking risks offensively. (Henry Josey's devastating injury and James Franklin's apparent neck stinger did not help in this regard.) We were spoiled over the years with high-flying, entertaining offenses and high point totals, but this was a very SEC way to win a game.

Honestly, thinking about what has hurt Mizzou's defense at times, the move to the SEC should help Mizzou quite a bit. They have a solid front four (even if it isn't as good as we hoped), physical linebackers, and at the very least, a solid set of first-string defensive backs. They do not have good enough depth to avoid getting occasionally torched by high-pace, five-wide Big 12 offenses (and their own offense will certainly find the going a bit rougher in the SEC East), but Mizzou games will certainly take on a different identity next year, for better or worse. 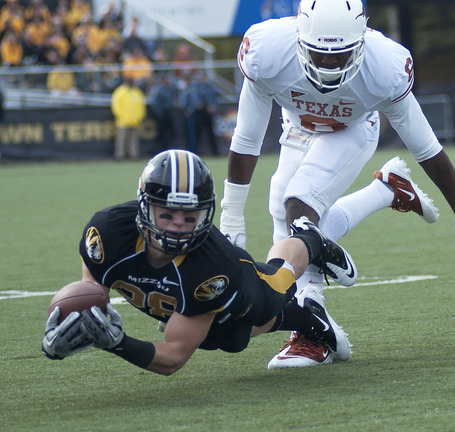 For all of Texas' offensive issues, their defense is still pretty damn good. Kudos to Mizzou for staying just persistent enough, particularly in the second quarter, to build the cushion they needed. Texas tackled incredibly well, but two plays all but won the game for Mizzou: T.J. Moe's 40-yard catch on third-and-7 that set up the first touchdown (this game mere seconds after I proposed Mizzou run the ball to set up for a more convertible fourth down) and Kendial Lawrence's 35-yard option run for the second touchdown. Yes, Mizzou benefited from the dicey personal foul call the play before; you know what I'd rather highlight instead? De'Vion Moore's killer block on Lawrence's run.

In the end, this game was a nice instance of upperclassmen stepping up and providing in the middle of some tough sledding. Lawrence (junior) rushed for 106 yards, Moore (senior) provided a killer block, Moe (junior) fought his way to 12.3 yards per target, and Jerrell Jackson and Wes Kemp (seniors) caught five of seven passes thrown their way. Some high-upside youngsters struggled -- passes to Marcus Lucas went 0-for-3, and L'Damian Washington suffered what could have been a killer fumble, but the experienced players in whom I have expressed disappointment this season came through when they were absolutely needed.

Winner, winner. As I put it on Sunday, this wins keeps the "another 8-5 season during a quarterback's first year as starter" streak alive, and that would be, symbolically, a lovely accomplishment with the transition on the horizon. Now it's time to take care of business against Texas Tech and Kansas. A loss in either of these two games would take some shine off of this win, even if Mizzou still managed to attain bowl eligibility.