Atch is out today, but in anticipation of questions I might ask, he sent me some word association answers. Therefore ... it's a word association Roundtable! Respond to the following words/phrases in a sentence or less. I added a few that Atch didn't anticipate. He's just going to have to live with the fact that he didn't answer them.

Bill C.: Alright, fine, I'll answer my own damn questions since the roundtable is obviously taking this week's Tech game for granted.

1. Beating Texas in Football (or anything, really): Fun and too rare.
2. Losing Henry Josey: :-(
3. SEC: Better at basketball, and worse at football, than we want to believe.
4. Preferred Bowl (if Mizzou makes one): PINSTRIPE BOWL, BABY.
5. Mizzou Basketball's offense (or in Doug's case, Kansas'): Unstable.
6. Kadeem Green (or in Doug's case, Random Kansas Big on Bench): Good in two years.
7. Kim English from three: A welcome addition.
8. Phil Pressey listed as Flip in ESPN box score: The Fran Fraschilla Effect.
9. The New Florence + The Machine album: No idea.
10. Community getting (at least temporarily) bumped from NBC's Thursday lineup: Typical. Also: I HATE YOU, WHITNEY.

The Beef: Since it is senior day for Mizzou (I imagine it was senior day last week at kU)…name the "off the beaten path" senior you are going to miss the most.

I will say Beau Brinkley…

ZouDave: You mean instead of Marvin Norman, the OL from Steger, IL?  Dude, that guy is awesome!

Brinkley has been so great for us.  I can’t remember a single bad special teams snap from him, and he’s often the first guy down the field on punt coverage as well.  He will be missed.

But I’m going to make my own rules to your question and say Luke Lambert.  He never got the attention/adulation/expectations of other departing seniors like Egnew, Jackson, Kemp, Hamilton, Hoch, or Ressel but Lambert has been an awesome, awesome Tiger for us and will be sorely missed.  I’m going to miss (though people in Section C probably will not) screaming "the *PRIDE!!!!* of Brookfield, Missourah!" before every game when he is introduced as a starter.  I am going to miss screaming "LUUUUUUUUUUUUUUUUUUUUUUUUUUUUUUUKE" after every one of his tackles.  I would have loved the way Lambert plays the game no matter what, but the fact that he’s from the same home town as my dad really helps.  #33 in your programs, #1 in our hearts.

Bill C.: Hamilton certainly isn't "off the beaten path," but I'm going to miss that dude. But yeah...in terms of under the radar, it pretty much has to be Brinkley. Or Dan Hoch, if you go by the "all offensive linemen are off the beaten path" rule.

The Beef: Another answer would be Gerau, who not only gets killed over the middle all the time, but is also the holder.  Entirely new battery next year in front of the kicker.

Bill C.: At this point, I'm assuming Barrow's the guy. Unless we can get Ressel a med red since, you know, he broke his hand before the second game and, to my knowledge, was never seen again after that.

ZouDave: Your knowledge is an idiot.

He missed 2 field goals against OU, did he not?

The Beef: Your knowledge eh?

ZouDave: He also missed 2 more against KSU, now that I think about it.

Bill C.: Um, yes, he missed a lot of kicks this year. That was the point.  /jokefail

ghtd36: Could be worse, guys. You could have a Heisman contender QB who's lost two chances at BCS games because kickers can't make sub-40-yard field goals.

ghtd36: 1. Beating Texas in Football (or anything, really): This year? Unsurprising. Every other year? Wahoo!
2. Losing Henry Josey: Buzzkill.
3. SEC: Another conference.
4. Preferred Bowl (if Mizzou makes one): Super Awesome Pinstripe Bowl
5. Mizzou Basketball's offense (or in Doug's case, Kansas'): Jump-shotty
6. Kadeem Green (or in Doug's case, Random Kansas Big on Bench): Long
7. Kim English from three: Believe it when I see it
8. Phil Pressey listed as Flip in ESPN box score: About damn time
9. The New Florence + The Machine album: Hip
10. Community getting (at least temporarily) bumped from NBC's Thursday lineup: Troy and Abed in the summer!

The Beef: You’ve not watched the first two basketball games this year?

The Beef: You should take a look at the stats in them

ghtd36: I assume you're talking about Kim English's three-point prowess of late? It's certainly interesting -- 9-of-15 at any time is certainly exceptional -- but I'm not going to get too excited about the three-point shooting ability of a career ~37% three-point shooter just yet. Regress to the mean, and so on. Is it possible that he's improved? Absolutely. But I don't think he's going to turn into Ali Faroukmanesh after three years of being Kim English.

And yes, I chose Ali Faroukmanesh on purpose.

ghtd36: So, um, is anyone going to be at the game on Saturday? With dorms closing on Friday night and a struggling opponent coming in, I think I might be alone at Faurot.

ghtd36: All the geniuses that sit behind Bill might finally be able to be heard by Pinkel.

The Beef: That might draw my 2011 home season to a premature close

ghtd36: You mean you don't enjoy being serenaded by men screaming at the offensive coordinator for not running the ball even though A) they've run the ball plenty, and B) he's in the booth?

D-Sing: I wonder how many of the serenaders could even pick the offensive coordinator out of a lineup.

Or they think that the head coach calls the plays for Mizzou so hey, yell at him.

Or yell at him to yell at the OC to run the ball more.

Then again, I'm trying to apply a veneer of logic to some pretty illogical people.

Doug: I knew there was a trick to play calling.  That's what I get for watching KU and the Chiefs play this fall.

The Beef: So how about the news that Bob Davie is going to take over the New Mexico program.  Always thought it was interesting that he got run out from ND all those years ago for only winning 7-8 games a year and graduating 100% of his players….

Doug: If he managed that at UNM he'd be treated as a god.

I don't think he'll manage that at UNM.

The Beef: True…but I think he will do better than Locksley did

D-Sing: I think I could have done better than Locksley did. At the very least, I wouldn't have had the off-field issues he did.

ghtd36: But could the guys who sit behind Bill and Seth do better than Locksley?

The Beef: Well sure…they know enough to run the play that gets 10 yards on each play.  They would be very efficient on offense

Bill C.: They know how to run a good defense too: "TACKLE HIM. STOP THAT GUY."

ghtd36: I've long maintained that my fiancee would make an excellent head coach. Her analysis is impeccable.

Tell me, how would those strategy fail?

Doug: That's basically the analysis they offer up on College Gameday anymore.

The Beef: Hopefully they will drop a mention of the 147th version of Lehigh/Lafayette as the #6 Mountain Hawks look to complete a 10-1 season and wrap up a 1st round bye in the upcoming FCS playoffs.

Doug: You can't have playoffs in college football!  What are you, crazy?

A programming note: Thursday on The Closers (listen at www.kfru.com) - I will have a noted College Football Blogger Bill C. as my guest from 4:30 to 5:30.

What types of questions should I ask him?

D-Sing: Because every roundtable can use a dash/dose/pinch of food...and since I don't know if this was brought up before...I would like to present the bacon pig: 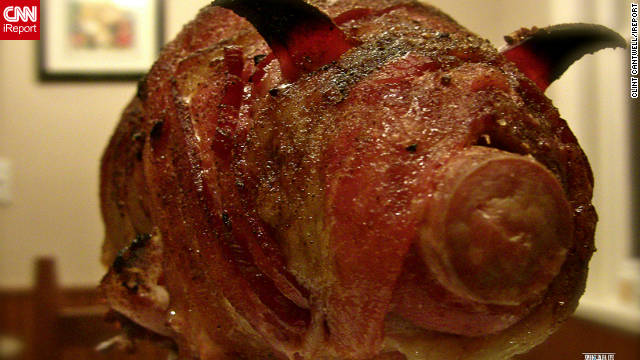 Story on how to construct your own.

If it has been covered...well...sorry.

ZouDave: And now that one scene from The Lion King is stuck in my head.  Thanks. 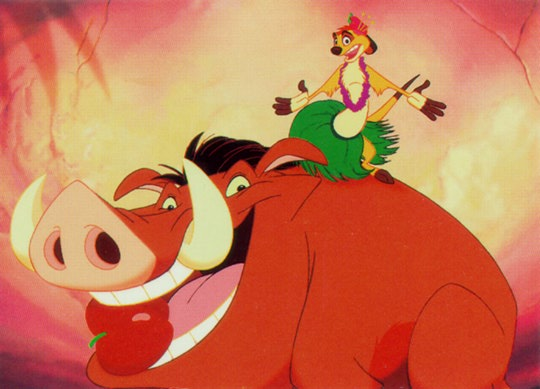