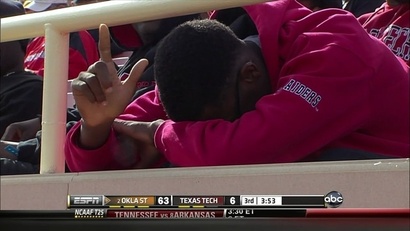 Ever since I became affiliated with Mizzou, I've always had a soft spot for Texas Tech. I never had to explain it, and I've never been able to actually verbalize it, but for a school I've never been to in a state I've only visited three times, I found myself drawn to them.

And then when Tech hired Mike Leach and we got to know more about their iconoclastic coach and the pass first (and second) offense they ran, my affection grew.

Oh, and I have Double T Nation to thank for leading me here to Rock M Nation.

But watching what has become of them over the last couple of seasons since the termination of Mike Leach has been sad.

Yes, the Red Raiders went 8-5 last season, and could very well wind up with that record again if they rip off another three game winning streak.

But the verve seems to be out of this team after upsetting Oklahoma in Norman on a weather delayed Saturday last month.

During this three game losing streak, Tech has lost by an average score of 53-11. The offense has struggled in rushing the ball and at times, throwing the ball. The defense is got shredded on the ground by Iowa State (!) and by Texas, and then got touchdowns rained on them by the Oklahoma State aerial show.

The fear that Texas Tech administration should have is apathy setting in. Apathy, not anger, is the enemy of a coaching staff. I know we've talked about some of the people in the stands behind Bill C. and The Beef and I know I've spoken ill of them as well. But even in venting their frustration at Yost for the playcalling, at least they are venting. They are passionate. They are engaged. They are annoying but they care.

If the losing keeps happening at Tech, though, I wonder how long it will be before the apathy takes full hold. And that apathy would be what would ultimately cost Tommy Tuberville his job.