Deep Out: Kansas and The End of the Road

Share All sharing options for: Deep Out: Kansas and The End of the Road 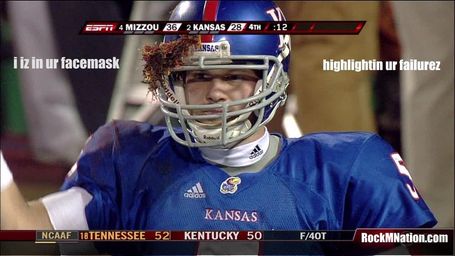 The title for this quick slant is not wholly appropriate, now that I think about it.

I was trying to think of some break up songs and I immediately flashed back to the early nineties. I went to an all male, Jesuit high school, and every month during the school year (or almost every month) the school would sponsor dances/mixers. I think it was to help us overcome the social awkwardness from being 13-17 year old boys cut off from females during the regular course of our high school lives.

Anyway, the tensest parts of the dances for me was when the slow dance songs came on. Chubby, nerdy kid who has a crush on a pretty girl trying to ask her to dance? Not good.

But enough of my therapy. The first song that popped into my head when thinking about this game: The End of the Road by Boyz II Men.

But a reading of the lyrics just didn't strike the right chord with me. I think there is one song that might sum up the sentiments better.

In particular, the second verse

That is all I am taking with me

We both know I'm not what you need

All kidding aside, it would be foolish to not acknowledge that there is something sad about what will transpire at Arrowhead on Saturday. Missouri-Kansas is the second most played rivalry in Division 1 FBS, and the fact that the series will go on indefinite hiatus is a bit sad.

I will also admit that I might not notice it not being on the schedule next year. However, I think that my perspective is shaded by not living in the Kansas City area, where I believe that the suspending of this rivalry cuts much deeper for a multitude of reasons. I know that they've been discussed in the tens of thousands of comments that we had during EXPANSIONAPALOOZA™ this year.

But when (not if) our paths cross again in basketball (more likely to happen via the NCAA tournament) or football (when Turner Gill is finally shown the door and KU gets a real football coach), I believe that Hate Week will return in all of its glorious splendor.

Because sometimes hate, contrary to popular opinion, is good for the soul.