Deep Out: Baylor Bears and the Power of a Transcendent Athlete

Share All sharing options for: Deep Out: Baylor Bears and the Power of a Transcendent Athlete

(Yes, it is normally a "quick slant", but I wound up running a bit long and so a longer pattern name was needed.)

In basketball, because there are fewer players on the court, it is easier for one great player to take over a team and raise them to another level.

In football it doesn't happen that often, in part, because there are more moving parts at play. It's hard for one great player to dominate and change the face of a program and a franchise.

On November 28, 2007 Baylor named Art Briles, then coaching at Houston, head coach and awarded him a seven year deal. Briles, who had one Conference USA title to his name at the time was taking over a program that had struggled for a long, long time by moving to Waco. He left behind Case Keenum as the quarterback of the future.

But Briles took with him to Baylor the fourth best dual threat quarterback prospect in the nation, and the 42nd best prospect in the state of Texas for the 2008 class (according to Rivals). This young man was also a track phenom.

He also knows how to get down: 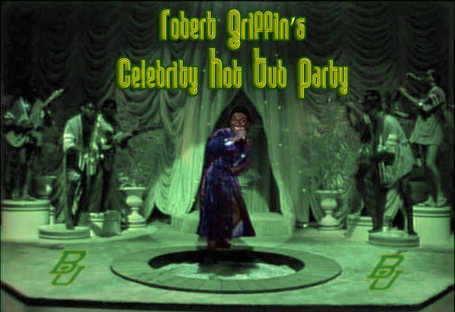 The 2008 Baylor Bears went 4-8, but if you watched Baylor play that year, it was easy to see that the future was bright with Robert Griffin III under center, and I think his value became clear the next season when he tore his ACL in the third game of the season and Baylor went 1-7 in conference.

Last year, the Bears went 7-6 overall and made a bowl for the first time since 1994. They were also ranked for two weeks in the coaches poll. Granted, they lost their last four games down the stretch, but still, it is hard to deny that Griffin was a key element to the success of the team.

This is not to say that he is Peyton Manning, but Baylor (Baylor!) was ranked for five week this season, and made a lot of noise when they took out TCU on opening weekend. Griffin's line? 21-27 for 359 yards and five touchdowns with no interceptions (and 10 carries for 38 yards).

He has come back to earth in conference play, but his traditional statistical numbers are still pretty impressive for the season, completing 75 percent of his passes with only four interceptions through seven games. The schedule the rest of the way is tough and Baylor might be hard pressed to make a bowl game. But I feel better about their chances to get there if Griffin III is on the field.

Oh, and he's only a junior. He has one more year left if he wants to use it.