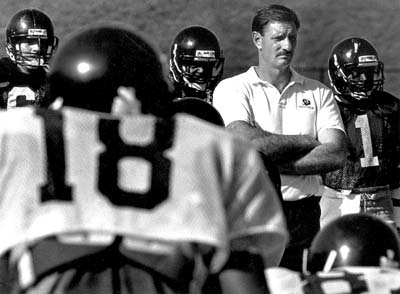 Yesterday, the "To Be Continued..." sign popped up just as Missouri was getting ready to play its first SEC game in the beautiful fall of 1992. The SEC had moved to 14 teams, reeling in not only Arkansas and South Carolina, but also a short-term powerhouse in Texas A&M and ... a good J-school in Missouri. Things aren't going to go well for the Tigers in their first years in the SEC, but they didn't go well in the real early-1990s either, did they?

(For the results below, I am using the Est. S&P+ measure you've probably seen me use before in these types of posts. Before 2005, I do not have a play-by-play database, so I used some of the same concepts in creating an estimated measure based simply on points scored and points allowed.)

(One other note: I tried to keep as many real results on the conference schedule as possible, so scheduling does not necessarily follow a perfect rotation. Occasionally you'll see back-to-back road games versus one team, or other little things like that. But since precise, perfect schedules really weren't the point of this exercise, I didn't mind doing that.)

A quick refresher on what happened in the real 1992:

We remember the early-'90s as a time when Bob Stull's offense was high-flying, but the defense was terrible. That's half-true. The defense truly was not good ... but neither was the offense. Both units ranked 58th in the country according to my Estimated S&P+ measure, and though Phil Johnson and Jeff Handy had good games in his time in black and gold, the mostly came against terrible defenses. In 1992, for instance, Mizzou scored 44 against 1-AA Marshall, 27 against 5-6 Kansas State, and 26 against 4-6-1 Oklahoma State. But against everybody else, they managed just 14.6 PPG. They did score 24 against Nebraska, mostly in a comeback effort, and they scored 22 against 8-4 Kansas, but ... not good.

The 1992 team did manage to create hope for 1993, however. They were young, with players like Steve Martin just beginning to thrive, and they managed to finish the season with back-to-back wins over Kansas State and Kansas, in which both the offense and defense took steps forward. But that didn't change the fact that the first nine games were, how to put it nicely ... awful.

And then there was the Thursday night ESPN game against Colorado where the wind and cold made for one of the most unpleasant experiences imaginable. Let's just agree to this right now: whether we're in the Big Ten or Big 12 in the future ... no more Thursday night ESPN home games. Ever. Ever, ever, ever.

The 1992 season wasn't an amazing one for the Big 8 -- Nebraska, Colorado and Kansas were the only bowl-eligible teams -- so Mizzou's point differential is a little worse in the SEC, if just because of the blowout losses to Tennessee and Georgia.

What Doesn't Happen: Missouri doesn't get an opportunity to exact revenge on Colorado for the Fifth Down (and fail to take advantage of such an opportunity in a 6-0 Thursday night freezeout loss on ESPN).

What Does Happen: Mizzou puts up a respectable showing in its debut, a home game versus Steve Spurrier's Gators. They are mostly competitive through mid-October before a thumping against Tennessee and a disappointing road loss to a bad South Carolina team end any marginal bowl hopes. They improve late; they blow a lead in a tie versus Vanderbilt, but they finish with an upset win over soon-to-be Big 14 member Kansas. The late improvement is enough to get Bob Stull a fifth year in Columbia.

Texas A&M definitely makes the most immediate impact of the four newcomers -- they were quite good in the early-1990s. Still, they cannot hold a candle to the eventual national champions from Tuscaloosa. Meanwhile ... we forget just how bad LSU was before Nick Saban came to town.

Slightly different scheduling (as compared to the real 1992) results in a three-way tie atop the East. Because of their head-to-head win over Florida (both beat Georgia), Tennessee actually advances to the first SEC championship game instead of Florida ... and they don't put up nearly as much of a fight.

In other words, this documentary never happens. People were worried that an extra game would hurt the SEC's national title hopes, but Alabama leaves nothing to doubt.

No changes here from the real 1992. Bama still takes home the crown, and the SEC still goes 5-1.

Here is where I remind everybody of who was on Bob Stull's strangely fantastic coaching staff in the early-1990s (from a 2006 Trib article):

The most remarkable upshot of the Stull era might be the prodigious coaching careers that emerged from his staff. The Stull coaching tree - it’s more like a branch off the Don James sequoia - never came to blossom at Missouri. But it produced some impressive legacies.

With all that coaching talent in Columbia, how could the Tigers have failed so miserably?

After miserable campaigns again in 1991 and 1992, there was enough returning talent to maybe once again hope for six wins, especially considering Mizzou finished the 1992 season hot, beating both Kansas State and Kansas. They whipped an Illinois team led by Simeon Rice and Kevin Hardy, 31-3, in the season opener, and optimism began to grow pretty strong.

And then Mizzou went to College Station. The 73-0 loss that followed -- in which R.C. Slocum was doing whatever he possibly could not to score more points -- effectively marked the end of the Bob Stull era. Mizzou would go on to thump Oklahoma State (I was there again!) and squeak by a 3-win Iowa State team, but there was just no hope. They could only manage a tie against a terrible SMU squad, and they once again got rolled by any team with a pulse. The Stull era ended with a sad 28-0 loss at the hands of Kansas in Lawrence, and the Larry Smith era would begin soon after.

What Does Happen: They instead get thumped by 12-1 Florida and 9-2-1 Tennessee. And A&M still happens (obviously). This year would have sucked if Missouri were in the MAC. But hey, they win on Homecoming, so that's something.

An on-probation Auburn squad no longer goes undefeated while banned from the postseason; instead, Texas A&M takes the division crown, with only a non-conference loss to Oklahoma preventing a perfect record. With Alabama regressing following their national title run and both Ole Miss and Mississippi State taking steps backwards, the West really isn't a very strong division this season.

The race is between Florida and Tennessee, and Florida takes the crown with a 41-34 home win over the Vols. They, too, have a non-conference blemish: 33-21 to Florida State. Still, the SEC championship is a heavyweight title fight between 10-1 teams.

A&M was good, but Florida was still better.

Two bowls change (compared to real life) this time around -- A&M replaces Tennessee in the Citrus Bowl, and Tennessee replaces Kentucky in the Peach.

The 1993 season is Bob Stull's final campaign in Columbia. To avoid some serious headaches, we are going to say that Larry Smith is still named to replace him. Here are the schedules that await him (with preseason rankings) in his first two seasons at Ol' Mizzou. The SEC became very top-heavy in the mid-1990s.