Yesterday, we took a good, long look at Missouri's in-state recruiting under Gary Pinkel. Here are a couple of general conclusions we can draw:

1. On average, Mizzou is going to offer scholarships to around 13 Missouri kids. If they land them all, that is basically half of a recruiting class.

2. On average, Mizzou is going to land about eight of the 13 Missouri kids they offer. It varies from year to year, of course, but that is the general average.

3. Of the players they don't get, few will make a significant impact elsewhere. In ten years, 19 four-star recruits have left the state. Four have made serious impacts at their chosen schools (Montee Ball, Josh Freeman, Adrian Clayborn, Laurence Maroney). You could stretch that number to perhaps six if you include Nathan Scheelhaase and Trey Millard.

Here is a chart showing both Missouri's win percentage in a given year and their in-state recruiting success rate (players signed divided by players offered) for the corresponding recruiting class. The years below are the year of the recruiting class, so "2002" means we're comparing the 2002 class (signed in February 2002) to the 2001 season. 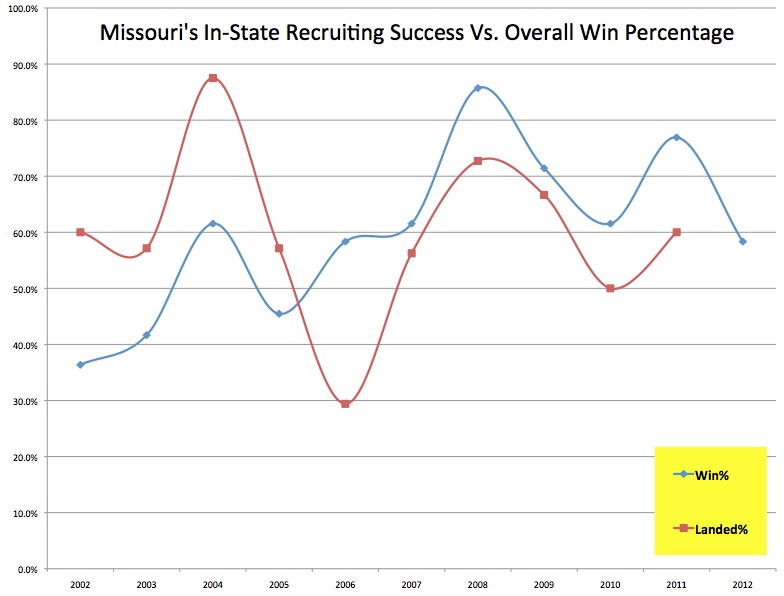 The trend here is pretty obvious. In almost every season, Mizzou's in-state success rate improves or regresses when their record improves or regresses. The only exceptions: 2003 (which makes sense following the 2002 "grace period" class) and 2006 (when the disappointment of 2004, combined with Aaron O'Neal's death, conspired to pull down a class despite on-field improvement in 2006). Otherwise, when the record goes up, the success goes up. Recruiting, even locally, is more fickle than we would prefer, but that isn't going to change. Win games, and you will reap the local benefits. If this trend holds, then Mizzou can expect to land about half of the kids they offer coming off of a 7-5 season. (As we'll see below, they are 4-for-7 so far, with four "free agents" still weighing options.)

The same general trend holds when you are talking about only the top names in the class. Here is the same graph, with an extra line included for Mizzou's success rate in landing 4-5 star Missouri athletes. 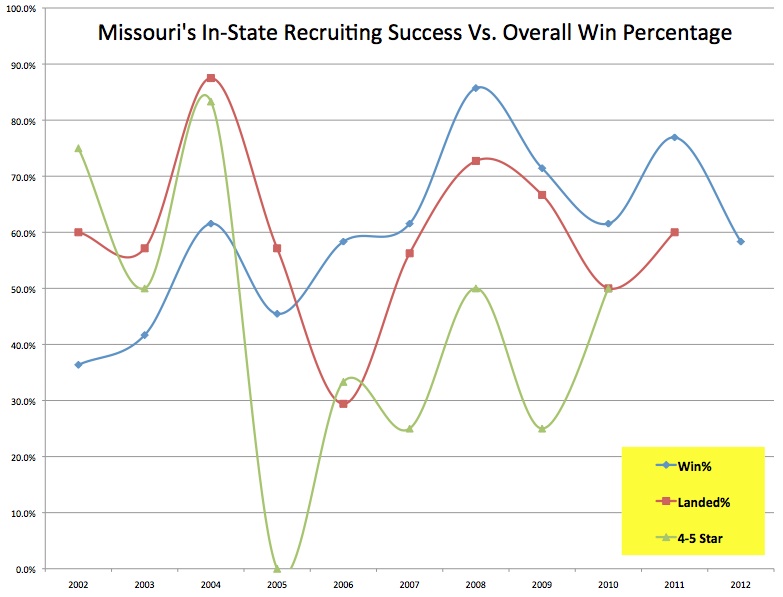 The 4-5 star line is a bit more unstable, but that is to be expected with smaller sample sizes. For most years, though, a good record is followed by a better success rate with the elite players.

There is actually a much stronger correlation between the strength of the class and simply an advance in years. From 2004-07, Mizzou's per-recruit star average was 2.73; from 2008-11: 3.04. So far, the 2012 class consists entirely of three-star athletes and one unrated player (Rickey Hatley), meaning the average is probably somewhere between 2.90 and 3.00.

The more Mizzou wins over time, the more they get the benefit of the doubt, both from recruits and, honestly, Rivals. When Mizzou uncovers some diamond in the rough from Texas, that player is almost guaranteed to end up with a three-star rating these days. At the same time, Mizzou has become more adept over time at identifying breakthrough athletes (they swing and miss on fewer and fewer recruits these days, even if said recruits have the same ratings as previous busts). In-state recruiting may be fickle (and oh, is it fickle), but long-term trends seem to be more based on Mizzou's overall trends, general status, and talent identification/development skills.

So now let's flip the question a bit.

In short ... no. No matter how hard that would be for Don Faurot to hear, the correlation is minimal.

Here is a graph looking at Mizzou's in-state success rate and the four-year win percentage that followed for a given class. So for 2002, we're looking at Mizzou's 2002 in-state success rate combined with their 2002-05 on-field record. This is done for obvious reasons -- the four following years are when most recruits are going to make an impact on a program (if they are to make any impact at all).

(I stopped with the 2009 class, which obviously has only a 3-year win percentage.) 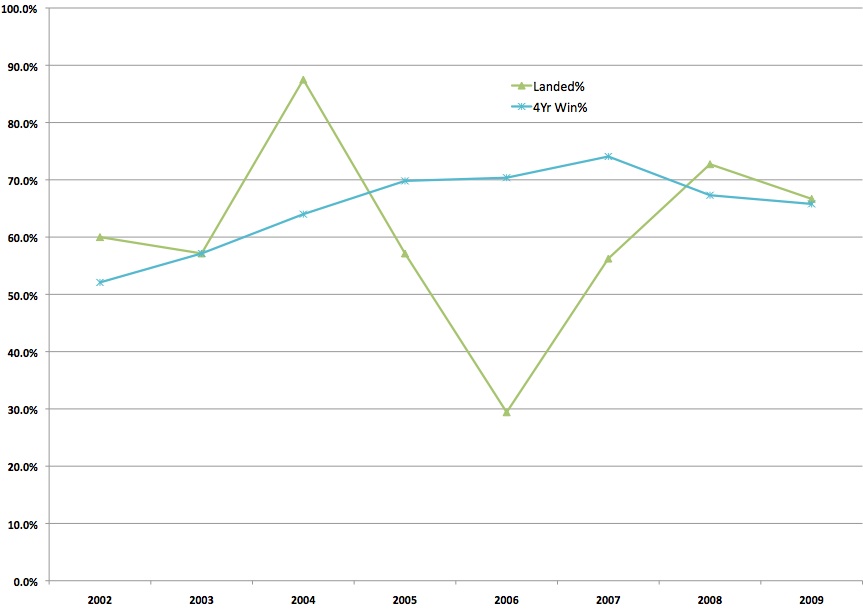 Mizzou's four-year win percentage has hovered around the 70-percent mark for the last five recruiting classes, even as their in-state recruiting success plummeted then rebounded.

There is a decent correlation between overall recruiting success and four-year win percentage. This is what Mizzou fans should hope for, anyway, as their last two recruiting classes have been, on a per-recruit basis, two of their better classes. Mizzou's connections within the state of Texas have been strong and gotten stronger, and that has more than offset any sort of gains or losses in-state.

From 2005 to 2009, Missouri landed six Texas players with a Rivals Rating of 5.7 or better (quick refresher: Rivals breaks players with given star ratings into further tiers -- a three-star athlete could have a Rivals Rating between 5.5 and 5.7, and the 5.7 kids are the ones closest to a four-star rating). They landed that many in the 2010 class alone (James Franklin, Henry Josey, Marcus Murphy, Bud Sasser, Tristen Holt and Mitch Morse); after a small, potentially iffy class last year (only Taylor Chappell fit this criteria), Mizzou currently has commitments from three such players in the 2012 class -- Donald Hopkins (a soft commit at best), Will Hines and Simon Goines. In-state recruiting comes and goes, but Mizzou's trend recruiting in the state of Texas has been mostly steadily upward. Though a lot of that will depend on how the next two months play out.

Texas recruiting has been so steady for Mizzou in recent years that the move to the SEC really could present an interesting transition. They are still hitting Texas awfully hard this year, but beginning next year quite a bit of attention will shift to Atlanta and Florida. As our own dcrockett17 has discussed, recruiting in SEC country is different. There are no states as spread-out as Texas, and there are going to be far fewer diamonds-in-the-rough to mine.

Mizzou will have to balance in-state recruiting with maintaining their decade-long inroads in Texas and establishing new connections in SEC country. It could work out beautifully, and it could result in a painful short-term transition. And if it's the latter, then recruiting in-state becomes doubly important ... which, in turn, means winning next season becomes just as important, as wins equal in-state recruits.

So how's it going this year?

By most accounts, both Jehu Chesson (Iowa, Michigan, Northwestern) and Nathanael Lohn (Iowa, Michigan State, Stanford) are looking elsewhere, which means that, at the very least, Mizzou needs to land at least one of the Boehm/Green-Beckham combination to maintain their expected in-state success rates (~50%) with this class.

There are plenty of other interesting names still considering Missouri -- four-star out-of-staters David Perkins (South Bend, IN), Jake Meador (Whiteland, IN) and Javonte Magee (San Antonio, TX) visisted last week, and supposedly four-star athlete Edward Pope (Carthage, TX) is visiting this weekend; this says nothing of the numerous "5.7" guys still on the board -- but for the most part, this class will be deemed a success or failure based on whether or not Mizzou lands Boehm and/or Green-Beckham. Land both, and it is a rousing success; land one, and it is alright. Land neither, and ... well, you probably shouldn't visit the PowerMizzou boards for a few months.

While you should care quite a bit about Boehm, Green-Beckham, and the rest of the 2012 class, Mizzou's overall performance trend is pretty well-established at this point. It would be a damn shame to come this close to landing both (Mizzou is in the final two with Boehm, the final five with Green-Beckham) and not do so, but trends suggest that Missouri is going to be pretty good in 2012 and into the future, whether or not these two players come into the fold. Mizzou's shift from Texas to SEC country -- and whether it is a smooth or bumpy transition -- will likely have a much larger impact on the overall track of the program than whether two individual Missourians choose to wear black and gold, but it would be a damn shame to watch these two players choose other schools and thrive.

Recruiting really is its own sport, especially when it comes to Missouri. Like programs like Virginia Tech and Iowa, Mizzou has made a habit out of talent identification and player development, and because of that, they haven't been as dependent on recruiting rankings for overall success. Still, you root for your team to pile up the stars, and it wouldn't be fun watching either Boehm or Green-Beckham go elsewhere. (Especially Green-Beckham; needless to say, it is rare that the No. 1 recruit in the country grows up two and a half hours from Columbia.) If they do choose other schools, however, it would probably be good to remind yourself that Mizzou has thrived as four-star locals have gone elsewhere, and they will likely continue to do so, even in the SEC East.