Timing is everything. The success of your program's rise and/or fall is dependent on who else in your conference is rising or falling at the same time. Sometimes they are correlated, sometimes they are not. Kansas State's mid-2000s tumble was due at least in part to Mizzou's recruiting success in the Kansas City area; suddenly the Chase Coffmans and Tony Temples were choosing black and gold over purple. LSU's rise in the early-2000s was timed with the downfall of Ole Miss and Mississippi State; one could easily draw a similar conclusion there.

But often, timing is just timing. It is somewhat out of your hands. When you do or don't play a certain inter-division rival could make the difference of a couple of wins in a given year. When you play a chief rival at home or on the road could result in a division title (or lack thereof).

I bring this up for one simple reason: Larry Smith's timing was pretty bad. Both his high point (1998) and his low point (1999) came when the Big 12 was at the peak of its power. The Big 12 was the best conference in the country in these years, and I'm not sure it was close. Kansas State was at its peak; so was Texas A&M (in the Big 12 era, at least). The level at which Mizzou was playing wouldn't be matched for another decade. Nebraska wasn't quite Nebraska, but they were still excellent. Texas still had Ricky Williams. Oklahoma was about to bring in Bob Stoops. Colorado was still quite formidable. Dan McCarney was about to make Iowa State interesting. Texas Tech didn't have Mike Leach yet, but Spike Dykes was still pulling in winning seasons every year. Oklahoma State was taking a step backwards but was still a tough out.

The numbers I am using for this little What If... experiment back up this sentiment. Texas A&M ranks third in the country in 1998, Nebraska fifth, Kansas State sixth. Missouri ranked 12th ... and was the fourth-best team in the conference. Texas and Colorado also ranked in the Top 25. That's half the conference. Combined with Ohio State, then, Missouri played the No. 2, No. 3, No. 5 and No. 6 teams in the country (three on the road) and lost all four games, three by a touchdown or less. They beat everybody else on the schedule by an average score of 34-17. Their timing, in other words, was awful.

In the SEC East, however, things would have played out quite differently.

And because I show this at every possible opportunity...

In Real 1998, Mizzou went 7-4. In Alternate 1998, however? With a schedule that includes only one top ten opponent (No. 4 Tennessee)? One can see how fortunes may have been a bit different. Mizzou gets Florida at home, faces No. 21 Arkansas on the road, faces off versus No. 13 in the Orange Bowl ... honestly, it is a bit difficult to disagree with these results, no? Maybe Ohio State is still on the non-conference slate. Maybe Randy Potter fumbles a punt and they lose in Fayetteville. Maybe Florida has to send out their eighth-string quarterback, and he pulls a Monte Cristo (like the 1998 Nebraska game), and Mizzou loses. And, of course, maybe this happens to Corby Jones instead of Clint Stoerner in a tighter-than-projected loss to Tennessee.

The point is, while we can debate whether the 1997 Missouri team would have been as successful in the SEC, it is hard to imagine Missouri not doing quite a bit better in 1998.

What Does Happen: Mizzou still almost certainly loses to Tennessee, but every other game on the schedule might fall the Tigers' way. We all loved that Insight.com Bowl win, but I think we'd have been perfectly happen, ahem, watching Corby Jones and Donovan McNabb duel in Miami instead, no?

Once again, timing is everything. When I drew up the schedules for this experiment, I not only had A&M and Tennessee playing in 1998 and 1999, but I had the 1998 game in College Station. A&M therefore defeats Tennessee, and the Vols are no longer undefeated national title contenders. If the game is in Knoxville, all moves forward according to the Real 1998. Still, Texas A&M loses to Florida State in the Kickoff Classic and at Texas to finish the regular season (yes, they play every year in this scenario too, just like Mizzou-Kansas), so they are also out of the title race. (For any Kansas State fans reading this, by the way ... yes, this probably means that you face Florida State in the national title game; nobody else in the South was probably going to squeeze out a Big 12 title game win over the Wildcats. See? YOU WANT A&M AND MISSOURI GONE.)

And no, Mizzou wouldn't have been projected to beat Tennessee in Columbia either. So no national/SEC title bids. But they head into November undefeated and finish in the Top Five. I think we can console ourselves with that.

I hate using projections to project the same matchup twice, but basically, A&M is projected to beat Tennessee by six at home, 2.5 in a neutral site, and lose by one in Knoxville. Sorry, Vols.

So either Florida State or Kansas State is your national champion, and Mizzou is your Orange Bowl champion. And then, accordingly, things fall apart completely. 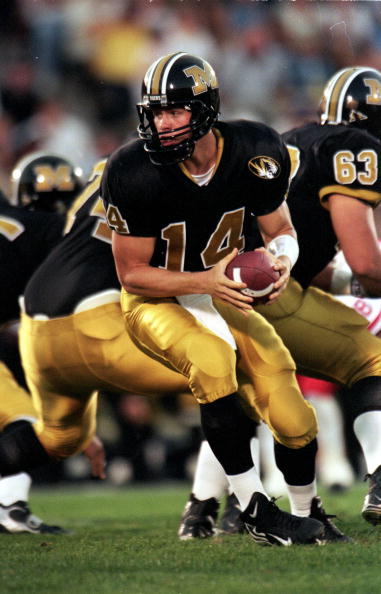 25 Sep 1999: Kirk Farmer #14 of the Missouri Tigers looks to hand off the ball during the game against the Nebraska Cornhuskers at Faurot Field in Columbia, Mossouri. The Cornhuskers defeated the Tigers 41-21. Mandatory Credit: Elsa Hasch /Allsport

The SEC was not as strong as the Big 12 in 1999, either, so the margins of the late-season losses probably aren't as bad here. But they're still losses, and Larry Smith's "could run for mayor" status is diminished all the same.

What Doesn't Happen: Well, a Kirk Farmer-less Mizzou doesn't lose by a combined 154-14 to Oklahoma, Texas A&M and Kansas State to finish the season. That's something.

What Does Happen: Farmer almost certainly still gets injured at some point even though Mizzou no longer plays Iowa State (it was kind of his thing to get hurt a lot), and Mizzou's offense still implodes accordingly. You could probably make the argument that they lose to Tennessee, Florida and Arkansas by a lot worse than a combined 64 points, then, but those details don't really matter. They are double-digit losses, and Mizzou finishes on a six-game losing streak. Going back to Alternate 1997, Mizzou was 20-3 over a 23-game span ... and then 0-6 in their next six.

Get your licks in on LSU now because their fortunes are about to change.

Florida beats Tennessee and coasts through an otherwise pretty easy East slate (they avoid losing to Alabama in inter-division play), and they meet Florida State in Gainesville undefeated. The season falls apart after that, however, as they lose to the eventual national champion Seminoles, then...

...get thumped in the SEC title game. They'll lose their bowl to Plaxico and Nick Saban as well.

In the late-1990s, bowls started to increase quickly, and the SEC was able to start finding a place for just about every bowl-eligible team. Not that this has any bearing on Missouri's fortunes for the next few years, of course.

Next up: goodbye, Larry.