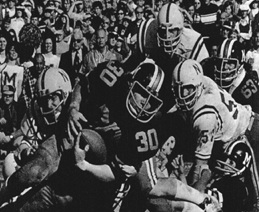 Two weeks before one of Mizzou's best, toughest wins of the 1970s, they took out North Carolina in Chapel Hill.

Note: the information below was pulled from a document provided by longtime Mizzou historian Tom Orf, @MU4124 on Twitter. He is a wonderful source of Mizzou information.

Next Monday will see the third meeting between Missouri and North Carolina; the two played a home-and-home series in 1973 and 1976, with Mizzou taking both contests. This week, we will relive those games as a digestive of sorts for the independence Bowl and the previews associated with it.

The 1973 season was the first of many "almost" campaigns for the Missouri Tigers. Here's what I wrote about them during last summer's Top 100 countdown:

Not sure what input our friend Earl Billings might have about this team, but in the league of Mizzou Teams That Were Good, But Close to Something Much Better, 1973 was near the top. This is a team that, as late as October 22, was receiving first-place votes in the AP poll (okay, one first-place vote); they took out #2 Nebraska at home and, at 6-0, faced a schedule with only one really good team (#3 Oklahoma at home) and one solid team (#17 Kansas) remaining. Mizzou was not far-removed from the greatness of the 1969 team, and with an experienced team made up of quite a few of the recruits signed after 1969's success, it looked like they were back among the elite programs in the country. And then they lost four of five to end the season.

The season is remembered most for the thrilling 13-12 win over Nebraska that vaulted them to seventh in the country in mid-October.

With the previous year's loss in their heads, Mizzou came out fired up, but against the #2 Huskers, simply being emotional wasn't enough to get a lead. Nebraska kicked two first-quarter field goals to take a 6-0 lead, but Mizzou struck back. Led in part by John Moseley's great kickoff returns, Mizzou won the field position battle in the second quarter, and despite the complete lack of a passing game (for the game, Mizzou would complete two of 10 passes for 7 yards and an INT), managed two field goals of their own. The always clutch Greg Hill booted three points through the uprights with 29 seconds left in the first half, and the 68,170 in attendance saw a 6-6 tie at halftime. [...]

With under three minutes to play, Jim Goble lined up to punt to Nebraska. As he had all game, Goble uncorked a beautiful 50-yarder. As Husker returner Randy Borg retreated to field the punt, he stumbled and bobbled the ball. All-American lineman Scott Anderson recovered for Mizzou at the NU 4, and with just 2:35 left, Mizzou had been handed a golden opportunity.

Two handoffs to backup fullback Tom Mulkey were all it took. Mulkey scored from a yard out, and with 2:03 left, Mizzou was suddenly up 13-6.

Nebraska responded, however. Sparked by the desperation of the moment, they needed just four plays to move 72 yards. NU QB Dave Humm found Ritch Bahe for 23 yards and a touchdown with a minute to play. Tom Osborne didn't hesitate--a tie would hurt NU almost as much as a loss would, so he was going for the win.

On the two-point conversion, the suddenly hot Humm rolled left and threw toward halfback Tony Davis, but Bob McRoberts deflected the pass and Tony Gillick pulled in the game-clinching INT. Mizzou had executed a 63-point turnaround from the previous meeting with Nebraska, and pulled off one of the biggest miracle wins in team history.

Two weeks before this win, however, Mizzou had to survive a tricky trip to Chapel Hill.

North Carolina was coached by Bill Dooley and coming off of one of their best seasons ever, an 11-1 campaign that led to a final AP ranking of 12th. (Why not higher? Because the ACC was basically seen as a Mountain West-level conference in the early-1970s.) Dean Smith was just entering his second decade as the Tar Heels' basketball coach, and UNC was definitely still a basketball school (they had made three trips to the Final Four between 1967 and 1972), but football was starting to develop a winning tradition of its own in Chapel Hill; UNC went 28-8 between 1970 and 1972. Alas, they took a rather hefty step backwards to 4-7 in 1973. They began the season ranked 19th but fell out of the polls after a narrow win over William & Mary. They were reeling from a 23-3 loss to Maryland when Mizzou came to town to play in front of 40,000 fans at Kenan Memorial Stadium.

The game started in the best possible way for Missouri: North Carolina fumbled the opening kickoff, and Mizzou took over at the UNC 26. Ray Bybee plowed out three rushes for 13 yards, then quarterback John Cherry found Mark Miller for a 13-yard score. Less than two minutes into the game, Mizzou led by a touchdown. North Carolina went three-and-out on their next possession -- two rushes netted no yards, and Chris Kupec found Ted Leverenz for just five yards. After a nice punt, Mizzou took over at their 26.

Mizzou played things close to the vest on the next drive; they gained 22 yards on six rushes to move the chains twice, but on third-and-7, Tommy Reamon lost four yards, and Mizzou punted. Another three-and-out for North Carolina gave Mizzou the ball back at the 35, however, and this time, Mizzou didn't stall out. UNC contained the run on first and second down, but first Tommy Reamon rushed for 21 yards on third-and-8, then Cherry found James Sharp for 11 yards on third-and-8. From the UNC 24, Reamon took over. He carried for nine, two and four yards, then Cherry threw his second touchdown pass from nine yards out to John Kelsey. The quarter ended with North Carolina at their 22 and Mizzou up two touchdowns.

North Carolina began the second quarter by moving the chains for the first time when Kupec scrambled for nine yards on second-and-7. But he injured his shoulder on the play and was replaced by Billy Paschall. The drive quickly stalled following an ineligible receiver penalty. Mizzou took over at their 45 but went three-and-out when Cherry couldn't find Sharp on third down. UNC advanced to their own 37 (their best field position of the game at this point), but Steven Yount picked off a Paschall pass and returned it to the UNC 37. With about nine minutes remaining in the first half, Mizzou had a chance to apply the dagger. But on fourth-and-5 from the UNC 33, Cherry was stopped for no gain.

After the teams traded three-and-outs, UNC found second life. Sammy Johnson broke off a 33-yard run, then Paschall found Jimmy Jerome (the player who fumbled the opening kickoff) for 21 yards to the Mizzou 8. Paschall found Dick Oliver at the 1, then sneaked into the end zone on third-and-goal with just 20 seconds left in the first half. The Heels had driven 86 yards in 10 plays, and instead of going down three possessions early in the quarter, they found themselves down just seven at halftime.

Mizzou didn't waste much time responding. After a short kickoff, Reamon ripped off a 24-yard run to advance into UNC territory. On third-and-10 from the UNC 27, Cherry found Sharp again for 10 yards, then Reamon took it to the house from 17 yards out. Mizzou had begun both halves by scoring within two minutes. And as in the first half, they kept the pressure up; Lynn Evans picked off Paschall and weaved his way back to the Tar Heel 20. Mizzou's offense stalled, but Greg Hill nailed a 32-yard field goal to put Mizzou up three possessions with 10:16 left in the third quarter.

Paschall, clearly a better threat on the ground, tried to bring UNC back with his legs. On the ensuing drive, he rushed five times for 50 yards, but he fumbled at the Mizzou 10. Reamon returned the favor with a fumble at Mizzou's 16, however, and six plays later, Paschall poked in from the Mizzou 4. The Tar Heels were down just 24-14 with 3:27 remaining in the quarter. Mizzou punted after six Bybee rushes, and the fourth quarter would start with UNC at their 28.

The Mizzou defense came up big to start the final 15 minutes. Johnson got stuffed for one yard on third-and-4, and UNC punted. Up two possessions, Mizzou doubled down on the run; Bybee rushed three times (for 23 yards), Reamon three times, and Cherry twice, but Cherry was stuffed at the UNC 39, and Mizzou pinned the Tar Heels at their 6 with a James Goble punt. Two plays later, John Moseley recovered another Paschall fumble. Three carries by Leroy Moss advanced Mizzou back into field goal position, and a 28-yarder from Hill gave Mizzou a 27-14 lead with 5:16 left. Forced to pass, UNC went backwards; Robert Keeney sacked Paschall and forced a UNC white-flag punt. Three rushes from Tom Mulkey, evidently the closer, helped eat up the clock, and the game ended without any other major incident. 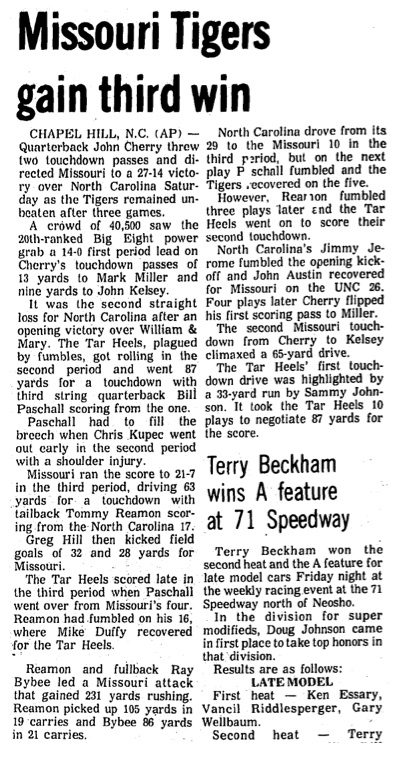