Share All sharing options for: Independence Bowl: Beyond The Box Score Preview

So here's where writing for SBN and Rock M gets a little awkward. You see, I already wrote a stat-heavy preview at the mothership. It posted a little while ago, and you should read it. So instead of starting from scratch, below I'll try to build off of what I've already written. That means two things: graphs and blockquotes.

Momentum doesn't tend to matter in bowl games; it is, I think, why the F/+ picks tend to do quite a bit better in bowl season than in the regular season -- with two to six weeks off between games, any sort of momentum pretty much dies by the time the bowl comes around. However, development and momentum are two different things. You may not be "hot" or "cold" when the bowl kicks off, but you can be better or worse than you were in September.

Any long-term trends worth noticing with either of these two teams? First, Missouri: 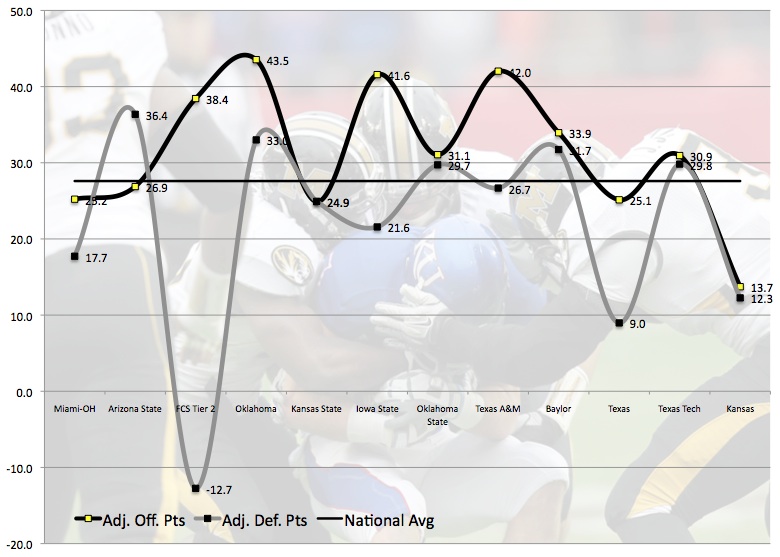 Mizzou was up and down all season, particularly on offense; they oscillated between a good offense and a great one, while their defense typically played at or slightly ahead of the national average. It is probably worth noting that two of Mizzou's three best defensive performances came in the last three weeks, but that might qualify as "momentum." In terms of style, however, Texas and Kansas were relatively similar to North Carolina, perhaps more than anybody else on the schedule. I mentioned in last week's In The Bleachers podcast that I wondered if Mizzou was more well-equipped to handle a pro-style attack than a spread; this potentially suggests good things in that regard.

The offense, meanwhile, had its issues post-Josey. As one would expect. 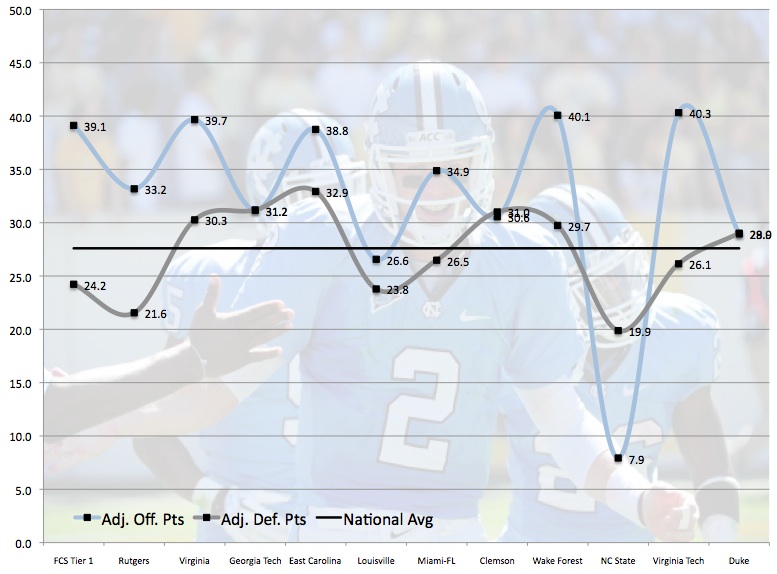 North Carolina's offensive trend has been almost identical to Missouri's in many ways. Up, down, up, down, up, down, lay an egg on offense against your chief rival, up, down, etc. The defense hasn't been nearly as good as one would expect considering the talent they have -- Quinton Coples, Zach Brown, etc. -- but most of the talent is in the front seven. If the pass rush doesn't get to the quarterback, the quarterback probably finds an open receiver.

So here are each team's overall trends on the same graph: 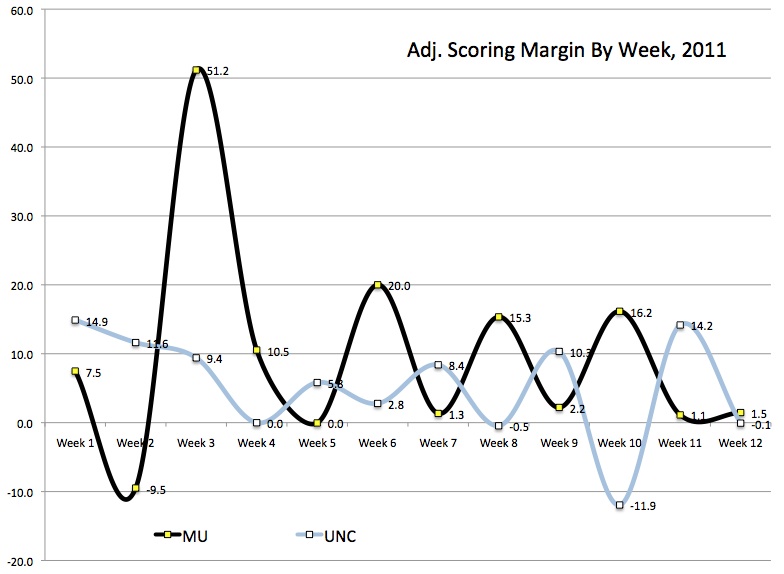 Basically, Mizzou's upside in 2011 has been quite a bit higher than North Carolina's, but their downside has been as low, or even a bit lower. And if you use Adj. Points as your guide, Mizzou and UNC playing 12 times this season would have each won six.

Below, I'll take what I said in today's SBN preview and add a few more thoughts.

If you can stay on schedule and avoid passing downs, you can beat the Missouri defense. On first glance, North Carolina looks well-put together in that regard. With decent balance, a strong, young running back and one of the most accurate quarterbacks in the country, the Tar Heels field a solid standard downs offense.

Quarterback Bryn Renner was the new face of the offense in 2011, and despite some growing pains along the way, his full-season stat line was quite impressive: 2,769 passing yards, a 69-percent completion rate, and 23 touchdowns to 12 interceptions. He basically had four targets, with a distinct hierarchy: Dwight Jones (100 targets, 79 catches, 1,119 yards), Erik Highsmith (65 targets, 43 catches, 648 yards), running back Giovani Bernard (46 targets, 39 catches, 338 yards), and everybody else (no one else was targeted more than 21 times). Bernard, a redshirt freshman, is a lovely dual-threat back, having also gained 1,230 yards (Adj. POE: plus-14.4). The strength is in the passing game, or to be more precise, the Renner-to-Jones combination; and after a brief, silly eligibility scare, Jones is indeed playing.

Through the first two weeks of the season, Bryn Renner had thrown seven incompletions -- three hit the ground, and four landed in defenders' hands -- and produced one of the oddest stat lines you'll ever see: 42-for-49 (86%), 550 yards, three touchdowns and four interceptions. He quickly needed to learn how to throw the ball away, and to his credit, he seems to have done so.

The key to this game is probably Bernard. If UNC cannot run consistently, Mizzou might be able to tee off on Renner, and as Michael Felder said in the podcast last week, you can shake him up and get him to double-clutch a bit if you stick him a few times. UNC will run all day if you let them, mixing in the occasional, aggressive play-action pass. But if you slow down Bernard, things could grind to a halt.

How Missouri attacks North Carolina's defense is a bit of a mystery. The Heels have a Top 25 rushing defense and should be able to hem in Franklin, Lawrence and company, but they have suffered quite a few lapses in the secondary. They are vulnerable on passing downs, but Mizzou hasn't shown amazingly capability on those downs. It appears to be strength-versus-strength and weakness-versus-weakness; the front seven, with players like end Quinton Coples (13 tackles for loss) and linebacker Zach Brown (72.0 tackles, 11.5 tackles for loss, three forced fumbles) are strong, but can a second led by safety Tre Boston (53.5 tackles, five passes defended) and corner Charles Brown (40.5 tackles, 5.5 tackles for loss, nine passes defended) avoid breakdowns?

The weather, as we'll see below, could be rather inclement, and after watching how wind wreaked havoc with James Franklin's passing at Arrowhead, one can understand how that might be a concern for Mizzou. Rain doesn't typically impact the passing game as much as we tend to assume, but Franklin's mechanics have to remain sound. Otherwise, Mizzou will have to pound away with the run game, and that might not be a winning strategy against the Heels. But if you can throw accurate passes downfield, there are holes to be poked in the UNC defense. East Carolina completed 41 of 58 passes for 417 yards against the Heels, Clemson went 28-for-48 for 373, and Duke went 26-for-41 for 285.

Through the years, Missouri has fielded one of the more flexible iterations of the spread offense. They first unveiled it in Brad Smith's senior season, and he logged his second 2,000/1,000 season. Then, Chase Daniel took over and led the Tigers to explosive passing numbers. Blaine Gabbert took the reins, threw bomb after bomb to Danario Alexander one year, then, in 2010, dinked and dunked to T.J. Moe and Michael Egnew.

In 2011, the offense led by James Franklin has been an amalgamation of all of the above. You've got a running quarterback not unlike Smith (Franklin threw for 2,733 yards and rushed for 947 pre-sack yards), and an offense with a higher run percentage. You've got reasonable long distance potential in targets like Marcus Lucas (414 receiving yards, 10.6 per target) and L'Damian Washington (317 receiving yards, 12.7 per target). And you've still got Moe (649 yards, 8.8 per target) and Egnew (484 yards, 7.2 per target) catching high-efficiency passes. What you don't have, however, is Henry Josey breaking long runs at any moment. The sophomore was on pace to set Missouri's single-season rushing record before recording the worst of trifectas -- torn ACL, MCL and patellar tendon -- in the 10th game. Kendial Lawrence (478 yards, -4.5 Adj. POE) and De'Vion Moore (151 yards, -2.3 Adj. POE) took over, and Missouri won their final two games without Josey, but the upside in this unit almost fully rests on Franklin's arm and legs at this point.

Mizzou's offense ended up performing reasonably well against Texas Tech, but it took a little while to get rolling. And of course, they were absolutely dreadful in the first half versus Kansas. They might not be afforded the same slow start this afternoon; then again, Mizzou's most celebrated slow start (and fast finish) took place in Shreveport. I will not be writing Mizzou off if they start slow again (and nor will you), but ... let's try to avoid that, huh, guys?

The Tar Heels run more of a pro-style offense, something Missouri didn't exactly see much of in the Big 12. Against their now-former pass-happy rivals, Mizzou showed potential on both sides of the ball. They tend to play soft and conservative on standard downs, then tighten on second- and third-and-long. The aggressiveness and athleticism of sophomore cornerback E.J. Gaines was a revelation as the season progressed; he broke up 16 passes on the season, and the Gaines-versus-Jones matchup should be thrilling. Beyond Gaines, the Tigers try to limit big plays and soften opponents up with hard-hitting linebackers Andrew Wilson and Luke Lambert (combined: 122 tackles, 19 tackles for loss).

Seriously, Gaines versus Jones could be fantastic. Again, that matchup might not matter if Bernard is doing particularly well (or particularly poorly), but Jones provides a big, strong test for an all-conference cornerback who might have been Mizzou's best defensive player at the end of the season. 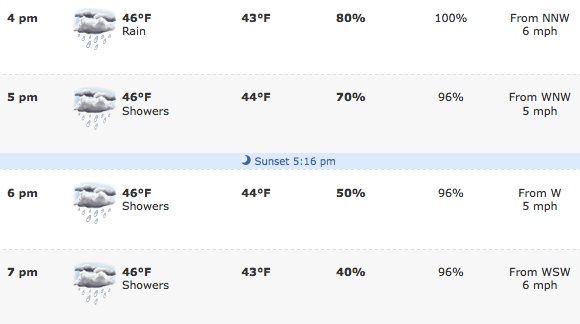 Yuck. It appears the rain could let up as the game progresses, but in the early going at least, it's going to be sloppy. As we've seen countless times, nasty weather doesn't necessarily have to slow you down or impede your gameplan, but it requires and extra level of focus and execution. Both of these teams have overcome worse things than rain this season -- UNC held together despite an NCAA investigation and an interim coach, and Mizzou fought through a ridiculous number of injuries and close losses (and that whole "coach got a DUI" thing) -- but weather could certainly mean for a sloppy start. Some slips or bobbles early on could define the game one way or another.

But hey, weather at the Independence Bowl allows me to finish this post with two relevant Indy Bowl videos (well, three, really -- two short ones and one really long one):