If you peruse around the NFL wing of SB Nation (and why wouldn't you?), you're probably well aware that draft prep is in full swing. With Mizzou players once again in demand (hasn't this recent stretch been quite nice?), NFL bloggers and fans having been asking for insight on next string of Tigers to test the NFL waters. I've tried to add my thoughts in this post, but a range of opinions from the community would be greatly appreciated to help paint a full picture for visiting readers. Add your thoughts in the comments.

TWITTER SUMMARY: Forget Mizzou's "system." Between a cannon arm and a 6'5" frame, Gabbert has always seemed genetically engineered to be an NFL quarterback.

THINGS THE PROS GET RIGHT:

You can't miss his arm. You just can't. Almost every quarterback can get a receiver the ball on a 15-yard out; very few of them can do it on a rope with zero arc from the opposite hashmark. A lot of quarterbacks can find a receiver along the sideline; very few of them can do it by beating the zone with an 18-yard laser in between a corner and safety sitting in the Cover 2. If you watch Mizzou's game tape, you'll understandably be assaulted by footage of screens and four-yard hooks. Don't mistake what Missouri does with what Blaine Gabbert can do. He steps into his throws regularly, he's largely accurate on his short and intermediate throws, and watching him throw a deep in is a simple pleasure in life.

Scouts and analysts have also talked about his surprising fleetness of foot. No one is mistaking him for Cam Newton, and shifting direction isn't really his forte, but given an open lane, he can make you pay:

Scouts are also right about being concerned about Gabbert's ability to read defenses, and more importantly, feel pocket pressure. Gabbert's reads improved as his career progressed, but Missouri's offense minimizes a lot of the heavy mental lifting that might be required at the next level. In the minds of Missouri fans, the pocket presence will perhaps forever stand out as the one defining criticism of Gabbert's time at Mizzou. In the same way Peyton Manning has an uncanny ability to take small steps to avoid pressure, Gabbert had a preternatural ability to scramble or roll into pressure. And, on a significant number of occasions, Mizzou's offensive line had Gabbert perfectly protected, only to see him roll into trouble when his early options didn't come open.

THINGS THE PROS GET WRONG:

The pros will deservedly drool over Gabbert's arm strength and tight spiral and probably immediately come to the conclusion that he possesses an incredible deep ball. But Gabbert's inability to hit receivers downfield for most of 2010 continued to baffle most Missouri fans.

Now, the pros may be correct in saying that Gabbert is unpolished, though I'm not sure it's entirely a knock on him. Gabbert missed most of his senior season in high school to injury, played almost no time as a freshman, played with an ankle injury that murdered his mobility for the bulk of his sophomore season, and finally had a full healthy season to put it all together in 2010. Is there still room for growth? Absolutely. But while draft analysts evaluate "the final product," so to speak, Gabbert's growth continues to prove that he's still in his formative stages.

NON-FOOTBALL THING YOU MAY FIND ENDEARING/CHARMING/INTERESTING:

Does your fine, upstanding NFL franchise operate within close distance of a market that sells steaks and asparagus? If not, you may be the Baltimore Colts drafting John Elway or the San Diego Chargers drafting Eli Manning.

According to the stream of photos uploaded to his Twitter account, Gabbert eats a meal consisting of steak and asparagus somewhere in the ballpark of eight days a week (yes, I realize what I said). "Blaine eats steak and asparagus" became such a common storyline that the Columbia Missourian even ran a feature titled Cookin' With Blaine, in which you too can learn the secrets of heating meat and vegetables over medium heat! In fact, Rock M Nation had this photo exclusive the day Gabbert declared for the NFL Draft: 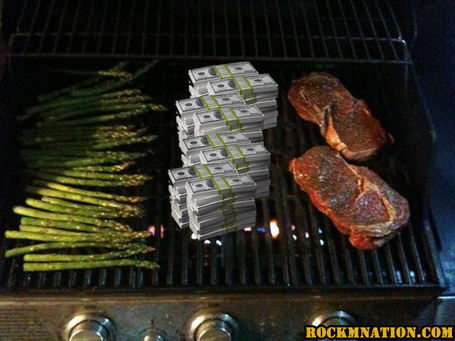 And another thing, if you want an interesting soundbite, draft Aldon Smith instead. Everything Blaine Gabbert does seems modeled after an NFL quarterback. That includes his interviews, which range from "intelligently innocuous" to "mind-numbing cliche machine." He'll be a dream for your franchise's media relations crew and a frustrating puzzle for your reporters. Generally speaking, he says exactly what he's supposed to say. Every now and then, he'll give you a glimpse into both his personality and his intellect, making the other 99 percent of his interviews that much more frustrating.

Blaine Gabbert has found a number of champions in the media, but he's also found a number of critics, notably Wes Bunting of National Football Post. And while this bit of fence-sitting isn't a hot sports opinion that will blow up our page views, I kind of agree on both sides. Gabbert has every single physical tool that makes NFL scouts tingly, including a rocket arm that can dent receivers' sternums. And while I think concerns about his "meekness" are overblown (being overly vocal does not immediately equal leadership), the concerns about his ability to read defenses and pressures in real time are very much a concern. But that's what you're getting with Gabbert. You can be concerned about his footwork from under center or his reads. You can't be concerned about his skillset. Ultimately, how much do you trust your coaching staff to turn NFL talent into NFL success?

I CAN HAZ LINKS? Yes, you can:

Just because Gabbert isn't throwing doesn't mean you shouldn't be watching the NFL Scouting Combine on NFL Network through March 1.